Well, today was the first time I've really had a chance to do any painting in my new hobby room. Pete of the Duchy of the North came over this afternoon (Sunday) and we put in about 3 1/2 hours of painting. 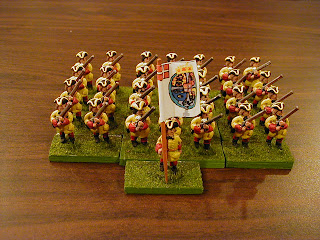 Now since it is too cold here to do any priming outside (I use a black spray primer), I wasn't able to start on my RSMs since they are still in a bare metal state.

Instead I began re-painting some more of my Great Northern War figures to 'stand in' for my Saxe-Bearstein troops.

While not finished, the figures shown in the photo are the major result of the session. Obviously the flag is not correct for Saxe-Bearstein . . . it is however correct for the ten or so figures that started out as the Danish unit that formed the core of this project. A new Saxe-Bearstein flag will soon appear.

I also managed to get a fair portion of a cavalry unit 'prepped' for the next painting session. Meanwhile Pete worked primarily on his artillery and on getting some cavalry ready to prime.

I've always found that getting together to paint is a great way to get a lot done . . . you sort of 'feed' off of each other, getting ideas and learning different techniques. Also, if interrupted, you get right back to painting (which isn't always the case if you're painting solo).

We'll probably do this again next Sunday, health permitting.

..what a nice sociable way to spend the afternoon! Bit like a wargamig equivalent of quilting!

So was much tea and biscuits consumed? :o))

For "stand-ins" your figures really look very nice. But I'm eager to see your RSMs take shape. When does spring usually arrive in your part of Canada? Apropos that, when you spray a basecoat on figures, how thorough is the coverage? I've never had much luck with spray primers, and in the end (sigh) finally just decided to paint it on by hand. It sames the inevitabel touch-ups later.

By the way, thank you for your call the other day. Sorry I missed you. WIth the house and arranging various pre-closing inspections, our time has been stretched kind of thinly. We were out, meeting with our real estate agent when you called I think. I actually do have a couple more questions about warfare earlier in the century. I'll have a look at my notes in the next several days and e-mail them to you. Have a good day.

Good on you Jeff!

I understand the *not* returning to painting part when there are three (or four if you count the dog) distractions to keep you *away* from the painting process...

Good to see you so active again!

Very nice toy soldierly minis. :-)
Sounds like a great way to spend a couple of hours or so.
Now that the holidays are over I've been managing to do a bit of painting lately, hoping to keep up the momentum.

Good to see the Danish Guards arriving. The straw coloured uniform is one of my favourites and I like the Danes for the variety of uniform colours for that reason.

An afternoon painting with friends is a great way to spend time. it is one of the better aspects of the GW shops and the painting tables they have to encourage and improve gamers. I quite like taking figures to the club and painting with other gamers and having a chat at the same time. It's usually a great way of getting tips if nothing else - and at least they answer back unlike the radio.

Sounds like you had a great day. I find that my pleasure comes from having painted something, rather than the process of actually doing the painting.

A shame to lose that flag though, I've given up on ever managing to do them. Its paper jobs for me.

I found a line drawing of this Danish flag in an old Wargames Illustrated and scanned it into my computer.

I then used a graphics program to color it, mirrored it and shrunk it down to proper 25mm size (more or less). I then printed it out on my inkjet.

I used to have a pretty regular goup painting night going on at my place. I'm a pretty productive guy - I paint a little bit of SOMETHING everyday - but I liked the company and the chat. Others, though, found it was the only time they ever got anything done...? I'll have to get that going again.

I have also scanned and printed off flags but I've only ever printed off the line drawing and then painted them myself - like a "paint-by-numbers" - it has a really nice look to it - and everyone's always impressed that you "painted it by hand" - like I did it free-hand or something.

Nice troops, by the way!

Sorry I missed your call yesterday -- things are a bit hectic around here as you might imagine. But Sonja enjoyed speaking with you. I have a small file to e-mail you, to get your thoughts and impressions. Will do it Monday afternoon.

Nice looking unit of infantry. The painting day idea is a good one.