(a report sent to Cavenderia by their ambassador, Monsieur Dashiell Jeansonne) 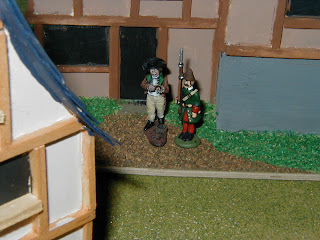 I find myself the bearer of terrible news. Before I even had a chance to reach the borders of Saxe-Bearstein, I found myself in a coach with another foreigner.

He was a grenadier, one Nils Norberg, in service to Lutelande and bore terrible news. He too was on his way to the Saxe-Bearstein Court. He had be dispatched by his commander to carry this news to Saxe-Bearstein . . . and, since it also concerns Cavenderia, he passed it on to me as well.

They discovered that those vile Stagonians have newly recruited 8 full battalions of additional soldiers!

These 6,000 men are being secretly trained and while they have not yet been issued uniforms, they do represent a very significant threat to all nations in the area.

It seems that the new vile King, Ludwig the Mad, is brewing some sort of mad scheme . . . but where and when he will choose to use these troops is unknown at this time.

As for Furst Bruno von Ursa, he received me most graciously and has welcomed me to his Court. However he then retired to his counsels to evaluate the news that Grenadier Nils Norberg of Lutelande had brought.

I will write further when I know more. 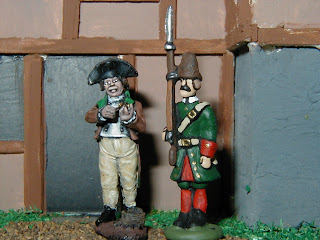 Both are 25mm figures. The former is from Eureka and the latter is one of John Bertolini's Lutelande Miniatures.

Sadly the flash has distorted the colors. Both figures look much better in person.)

Hello,
The flash does make you think "Thats not the figure I painted". You could try a table lamp with a flexible neck to light them up enough so you do not need the flash.

They already look good enough for me!
Is Grenadier Nils Norberg in his Lueland uniform, or in own of your own design?

Jeff where can I get hold of the Luteland figures?
Alan

Grenadier Nils Norberg arrived in the attire of his Lutelande unit (note that Lutelande has an "e" on the end).

He came from some odd province of that place called Saskatchewan or some such . . . and he certainly wasn't painted by me (I don't paint buttons for example).

The Ambassador is said to have originated in "Oz" . . . although that sounds suspiciously like a fictional place. Nevertheless he said that his forbearers were "Ozzies".

(Both figures were painted by the two gentlemen who sent them to me.)

Are "Ozzies" of the "Hopesborn" Church?

Speaking of the Stagonian forces, don't forget that one of their hussar regiments is entirely white-clad!
(on black horses - reversed for trumpeters?)

We will consider this grave matter and take counsel. As we are currently defending our shores from those dastardly Bizerrcans we are not sure how much assistance we may pose. However, know this that Cavenderia is a true friend to her allies and will assist, to the best of her ability, in whatever capacity as needed. We will send correspondence through the proper diplomatic channels, EvE.

Hmm! Upon which poor nation shall these Stagonians fall? Hetzenberg would help but the phony war against Dunkeldorf-Pfuhl may be getting real.

Reich Duke Wilhelm has decided to add his Horse Grenadiers to escort him on the Grand Tour. That should deter any schemers or evil doers...

His Majesty King Leopold IV of Wittenberg and his ally the Duke of Fenwick are keeping a close watch on the activities of Stagonia and will do all they can to come to the aid of a country which comes under attack from Stagonia.


Count Hermann of Munster
(on Behalf of King Leopold IV)

I'm afraid Lutelande still does not have an official gazette (blog) of its own?

No, John does NOT have a blog (or website) for Lutelande . . . although I've several times urged him to do so (most recently two days ago).

He does post some photos on the "Old School Wargamers" Yahoo! group.