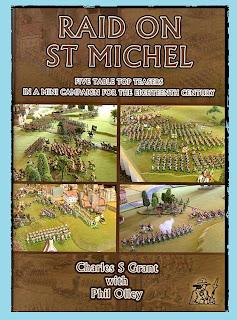 Well, after scanning the latter, I'm stoked! Later this year I will be running a campaign (probably between Murdock and Jerry, with Pete commanding a force in Murdock's command).

Of course first I've got to finish re-writing my rules . . . and prepping some different terrain bits. And finish certain "honey do" projects before I'm allowed to run the campaign.

The forces needed vary from scenario to scenario (there are five in total) but it should make for an exciting campaign . . . and none of the battles are "even" . . . so "victory" is not always easy to define . . . although the overall result of the "raid" will dictate a clear winner.

Everyone else . . . oh yes, this is a nice book to have . . . five connected "Table Top Teaser" scenarios providing some interesting command decisions.

The 1809 campaign will be all over the globe for tabletops so I will not be the only one 'in action' as it were.

Still building things on that front, so that means there will be time for me to push some lead on your tabletop...I will likely have to ask for my #1 son to come out to a game or two though.

I just got those two books as well...very inspirational! and the pictures are nice as well even in b/w.

I have both of those books as well, excellent reading.

After looking at the scenarios in Table Top Teasers I have been making new river sections, so I can try out some of them.

The Raid on St Michel book got me wishing I had enough space for charge sized armies.