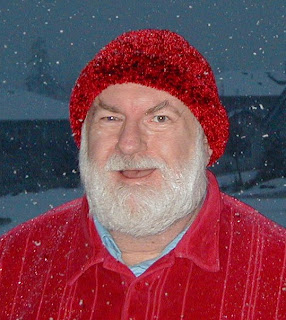 Posted by Bluebear Jeff at 9:51 PM

Lord that sounds like a lot of snow to shift! Were your elves...err helpers any use?

Was the snow the light fluffy kind that drifts with every little breeze, or was it the heavy wet kind that weighs a ton? I have found that using a "grain scoop" style shovel (Also known as a S**t Shovel on farms around here.) is a lot easier on the ol' back and knees when it comes to digging out the cars, and clearing off the porches and sidewalks. The newer ones even have "ergonomic" syle handles.

I'd be surprised if I was the first, but has anyone ever told you that your bear a uncanny resemblence to a certain Saint that is very popular this time of year? On second thought, don't tell me. If its a Clark Kent/Superman kind of thing, I don't want to blow your cover and end up on the Naughty List. Ho, ho, ho! Err...Ha, ha, ha!

We've been lucky here in St. Louis. What snow we've had consisted of some powdery fluff that blew around for a few hours one day then vanished. We've even had squirrels and rabbits running around! My wife grew up in Ohio where matters are very different and she's making the most of the mild spell. I like snow, but I'm in no hurry to drive in it...

Great photograph, Jeff! Enjoy the snow and send a little of it our way, please. ;-)

Our major "Christmas gift" to ourselves this year was an electric snow blower.

We thought that it would prevent any substantial snow . . . but it worked really well on the driveway and sidewalks last night . . . no more shovels for us!

The big thing to remember about driving in the snow is to take things EASY and to allow much more time to get anywhere . . . and to be aware that there are lots of idiots out there who are in a hurry, so beware of them . . . and particularly if there are icy conditions, don't go out if you don't have to.

I could try to box it up and send it your way . . . but it would be awfully expensive to ship and would probably melt before it got to you. So in lieu of the snow, enjoy your stollen.

Hi Jeff, with an outfit and beard like that, looks like you better make sure your driveway is clear come Christmas Eve - you'll be busy as usual I should think.....and someone told me Santa didn't exist....... :-).

Drove home from Courtenay in that snow last night, more than 6 in the ditch, not us though.

Will be taking someone back to Courtenay today. Ideally he roads will be plowed.

The only snow here is on the local mountains, but we did get a little rain and cooler temps, which I thoroughly enjoyed.
I've only shovelled snow maybe 3 or 4 times (while visiting friends) and it sure is hard on one's back!

Like the Santa Suit - the fake beard looks good on you.

Eeek all that snow ! Where I live in the sunny south of england we get hardly any snow - but when we get it everything grinds to a halt !