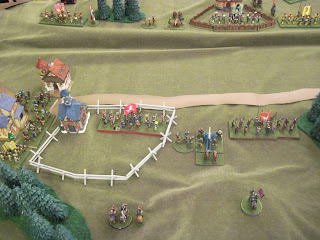 Posted by Bluebear Jeff at 3:01 AM

I'm glad you're feeling better, Jeff, and I hope you continue to improve. Getting a bigger monitor is a good move. My own eyesight is reaching the point where my optician is warning me I'll need bifocals soon.

Having other gamers control sides in solo games is a good idea, too. I was thinking of doing something similar.

AJ, I already have bifocals, as well as cataracts that are not yet bad enough for surgery.

One of the nice things about VWQ is that since it is card driven (both units and brigades) even with the orders from Ross and David, I never know what is going to happen next.

I operate under their orders, but sometimes events overtake them and (as in real warfare) some orders are obsolete by the time they are acted upon.

Try it, it is a lot of fun . . . and there isn't the time pressure of a face-to-face game . . . of course there isn't the camaraderie either but with my currently suppressed immune system I can't play those yet (not to mention my fatigure . . . which isn't as bad as when I was on chemo but is still iffy).

Glad to hear that things are getting better Jeff. Gaming must be good for you.

Thanks for the idea, Jeff. I'll certainly give it a try with Sharp Practice, which is also card-driven.

Jeff I am glad to hear you are moving forward.
best wishes
Alan

Yes, it is good to hear that things are improving for you, Jeff. May that continue apace. ("ooze back", yeah, I know how that is even in minor things.)
The big new monitor sounds great.

Keep at the good fight.

Glad to be taking a part.

Reich Duke Wilhelm is very pleased to hear your are recovering so well. He has ordered the College of Honors to award you Beerstein's highest award, The Military Order of the Golden Crown bestowed upon Generals for victory, gallantry, and derring do on the field of battle. Stay well my friend...

Always good to hear from you Jeff. I'm a big fan of VWQ.