Three Hours on the Phone --

I just got off the phone after a rambling three-hour conversation with Murdock. This weekend he's running a playtest of his upcoming Eylau Refight and we chatted about that and our thoughts on our upcoming "Wars for Arcadian Glory" (WAG for short).

His blog, MurdocK's MarauderS can be seen at this URL:

He's also just started a blog for his WAG country . . . the Duchy of Mieczyslaw (link on list at right). But so far his MarauderS blog has the most postings. I expect that we can see some photos of this weekend's playtest there in a few days.

We talked about some ideas we each had for basing troops . . . and you will probably see some of his ideas put into practice in some photos soon. 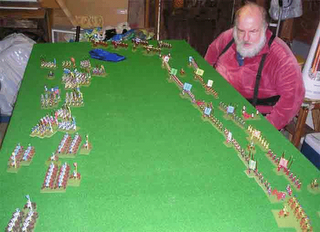 Speaking of photos, I've included one of me in Murdock's "game room" looking over some of my GNW troops (Saxons and Russians on my side; my Swedes on the other side).

I'm also now thinking of rebasing all of my GNW troops for my "Tricorne Wars" rules. The problem is that they were based for a different system . . . and I'll have to combine regiments . . . which will entail a fair amount of repainting.

Why? Two reasons, first I used Lance Runolfsson's "Blood Axe" 28mm figures -- which are no longer available. And his sculpting style for his GNW/WSS figures is not compatible with any other figures that I'm aware of. It is kind of rough and chunky compared to most . . . but I really like them.

The second reason is that I was very careful to make sure that I painted units very differently from each other. I used as many different facing colors as I could justify historically. Where these were often the same (such as with many Swedish units), I was careful to paint each one in differing shades.

Oh, well. At least the Cavalry wont require much repainting . . . it's pretty much right already.

Excellent conversation Jeff, and well timed with the difficulties I had that day!

Three hours on the phone? are you related to my daughter by any chance?