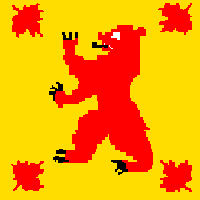 The standing red bear is the national symbol of Saxe-Bearstein (as seen in the "National Flag" to the left).

But other nations -- both real and imaginary -- have other symbols. For example, the white deer is the symbol of my "French-style" opposing nation.

I do not yet know what the "national symbols" of the Duchies of Mieczyslaw and the North will be. I'd guess a gold lion for the latter since it is based on Sweden . . . but who knows? 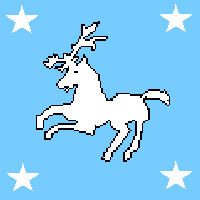 Murdock is creating an interesting historical background for Mieczyslaw so it could be most anything . . . I'll just have to wait and see.

Historically there have been lions, bears, horses, wolves and eagles (lots of eagles) among actual creatures; and things like dragons, griffins and unicorns among imaginary creatures. And, of course, some countries have inanimate symbols.

So, what is (or would be) the national symbol for your imaginary nation?

What color would it be? (common colors -- red, blue, black, white, yellow, green, purple and "natural".)

What color "background" would it usually be found on?

Hesse-Engelburg is of course already a blue wolf, and so far seems to be found most frequently on a white background, though that may change.

Since Stollen's ruling family is somehow very distantly related to the various contemporary ruling Hessian houses, its national symbol is the red and white Hessian lion against a dark blue background. Not terribly imaginative of me, but I do like the appearance of the Hessian flags!

Hibernia - the land I created for the Grimsby wargames campaing (yes I know I've still got to publish all that) - had a Scottish Thistle as it's emblem. along with a black boars head as a nod to my roots in Grimsby.