A Prince is Slain --

Well, Pete and I played another of Charles Grant's Table Top Teasers this past Tuesday night (#3 -- The Advance Guard Action). The action was fast and furious but ended in a negotiated draw when one of Saxe-Bearstein's princes was slain. 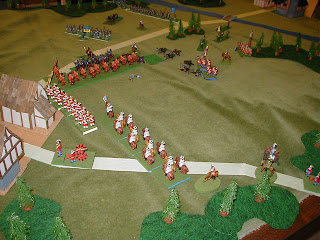 The action centered around the town of Fraudorf and the bridge over the Blauwasser river. Both the Duchy of the North and my own Principality of Saxe-Bearstein had dispatched forces to secure the town and bridge for the full field army.


The Norden forces entered nearest the bridge; while I entered near Fraudorf. In the early maneuvering, Pete nearly occupied the town but my Wildschwein Dragoons managed to overcome and destroy his two mounted units before its remnants fell to infantry fire.


Indeed this was a very fluid and bloody engagement. A battalion of my own Infantry Regiment von Urquell reached the bridge but was eventually had to withdraw. They were under the command of Brigadier Prinz Gunther von Ursa. 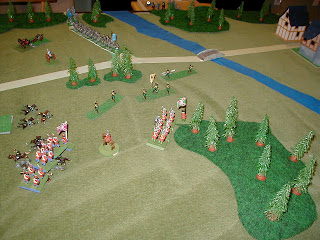 The prince had attached himself to an IR von Schlitz battalion when they were fired on from the rear by the late-arriving Norden Musk Oxen regiment who had just recently reached the battlefield. Unfortunately the prince (second in line for the throne) toppled from his mount having suffered a mortal wound.


Even though the Saxe-Bearstein forces seemed to have the upper hand, Major General Otto von Lager immediately suggested a cease-fire when he saw the prince fall (which Maj. Gen. Olle Fasjovik, the Norden commander was quick to accept).


Sadly the cease-fire came too late to aid Prinze Gunther, who had already passed away. 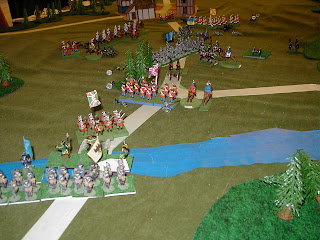 To the left are a series of battlefield sketches as seen from various points.


The first is early in the fight as the Wildschwein Dragoons (in red coats) close with some Norden Cossacks.


While that was happening, the second sketch shows Prinz Gunther leading his infantry brigade in a race to reach the bridge. Unfortunately the Norden skirmishing foot was able to delay them just a bit too much. Notice how eagerly the Prinz looks back at the cavalry action. 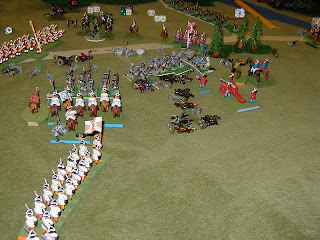 A natural cavalry commander, the Prinz had been forbidden by his father, Furst Bruno von Ursa, because of the many cavalry charges he had led during the Battle of Stinz. Perhaps if he, rather than Brigadier Karl von Blatz, had commanded the horse, he would not have fallen.


The third sketch shows a view from the bridge with the Prinz moving his von Schlitz troops around the copse of trees in a grand double envelopment of the Norden infantry forces. 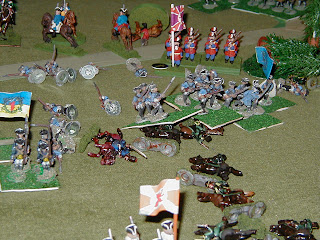 The fourth sketch details the closing of this double envelopment with the Prinz in the upper right corner. Behind him the Norden Musk Oxen regiment may be seen arriving on the battlefield.


Our final sketch shows the fallen Prinz Gunther (at top of sketch) just moments before the cease-fire was arranged.

-- Jeff of Saxe-Bearstein
Posted by Bluebear Jeff at 4:41 AM

Very sad about the Prince -- but console yourself with the knowledge that he died for King and Country. ;-) Lots of neat photos of the battle by the way. Thanks for sharing them.

von Ursa was always something of a 'wild card', let us only hope that the next in line to the throne has less 'martial spirit'.

The replacement cousin, one can only hope, will be able to live up to the expectations of Ursa's commands.

Reminds me, oddly, of the death of Prince Napoleon in South africa, while in British service. At least Prinz Gunther died wearing his own Country uniform.

Thanks for the pics and battle report! Gets me inspired to push forward on my painting so I can do some gaming one of these days. :-)

Nicce to get some gaming in and to give it some personality!

Bravo chaps! Will ad a link to the relevant teaser soonest... hoping to get a game in myself this coming weekend!