We have our annual local "Gaming Convention" coming up at the end of February . . . and I've committed to running a game for it. 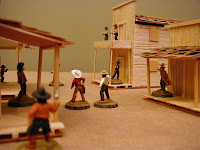 First you need to know that there probably won't be very many attendees . . . and most will be playing Role-Playing or Collectable Card games . . . although I think one other fellow will be running a role-playing game with miniatures.

Because we do not have a knowledgeable base of miniature players in the area, I've decided to run a very simple system -- Fistful of Lead -- which is available in .pdf format for only $6 from WargameDownloads.com.

(note -- I've also just realized that these rules were written by "Emperor vs Elector" member contributor "Baron VonJ" who writes the "Baron's Blog".)

Why did I pick "Fistful of Lead"?  Because, as Eric Hotz (of Larry Leadhead, Whitewash City, Roman Seas, Hotz Maps, etc. fame) wrote about them:


This game allows for fast and easy play, and players can play using more than one miniature without being burdened. May very well be the ideal convention game.


The mechanics of the rules are simple and easy to learn . . . and I suspect that I'll have some youngsters who want to play and these rules will work for them.

Is it the perfect set of "old west" rules?  No, for an extended campaign I'd prefer something like Gutshot:  but for a "one-off" game or just an occasional evening's game, "Fistful of Lead" is excellent (and the price is pretty good too).

I've built a bunch of the "Whitewash City" old west buildings and a friend had a couple of cowboy moulds and cast up a bunch of figures for the game.  I've got them primed and mounted on pennies . . . and on Sunday, Murdock and Pete are dropping by to help do a mass painting.

So, I'll have rules, figures and buildings . . . all I need now is a scenario.  The rules include several good ones, but I've got an idea or two of my own.

Oh, yes . . . what is "Grizzlyville?"   It is the name that I came up with for the town where the scenarios will take place.

(more to come in a few days)

Posted by Bluebear Jeff at 6:18 AM

I too will be running a FfoL game this Spring at RECRUITS in Kansas City. If you live even remotely close, it's a great convention and cheap , too ($5), free for students and military. Stop on by and say hello to zee Baron.
-J

Hi Jeff - was just thinking yesterday I hadn't seen anything from you recently - welcome back and good luck with the game...

Good to hear you sounding fitter. Best of luck with the game.

I think for skirmish games the simplest possible is good. In fact for any games...

looking forward to the conversational catch up on Sunday and taking a time out to heat up the brushes!

Good to hear you're better now. Best of luck with the games. I bought some Hinchliffe western skirmish figures years ago when the craze was upon me. I may dust them off yet.

I've done some Western skirmishes too. And it was pretty fun.

Hope you don't become a babysitting service but that you have fun and enjoy the day.

Brushworks were fun, great to test myself with 8 minis fully done in one day with some 20+ others that I put my hand to over a 4 hour period.