Well Murdock and Pete stopped by yesterday (Sunday) and we managed to get 44 figures painted for the Grizzlyville games at our local Dak-Kon convention (end of February). 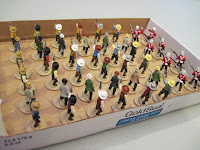 To the left you can see what we painted.  There are six gangs of six.  Each gang has its own hat color (white, grey, black, yellow, tan and brown).

You will also note eight "North-West Mounted Police" figures . . . well you probably thought that they were British Colonial figures, didn't you?

Anyway, thanks to the help provided by a couple of friends, I now have enough figures for the Convention.  Aren't friends great?

Posted by Bluebear Jeff at 7:23 PM

Nice to hear of a group paint by good friends!!!

Friends certainly are. And different styles don't show through either.

Friends are indeed great and that's an impressive output for a one day painting bee! If you ever expand on this and want more mounties including mounted ones in pillbox as in the days of Louis Riel, check out RAFM.

It was a nice quiet day out from my four walls.

Painting "parties" like that can be a fun and companionable way to crank out a number of troops quickly. Do please give us a battle report after the con (with pics, of course!). :)