Well I have now painted a dozen of the 1/2400 scale Panzerschiffe Russo-Japanese War ships.  I had ordered the six major ships for each side for the Battle of the Yellow Sea. 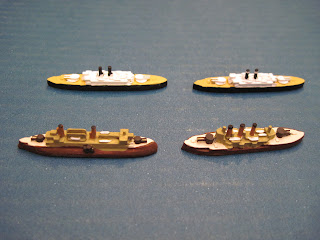 As I believe I have mentioned at times, I have chosen to use pre-war (or the transition to war) color schemes rather than  the boring gray gray gray of wartime painting.


Because my eyes are not the best and I wish to be able to easily distinguish the vessels of various nations.


As can be seen by the photo above (click on it for a larger image), I have painted the Japanese ships with their black hulls and funnels, and white superstructure and turrets.  The Russian ships have dark cinnamon brown hulls, khaki superstructure, ochre funnels and dark gray turrets . . . which approximates the reports of the Pacific Squadrons early in the war. 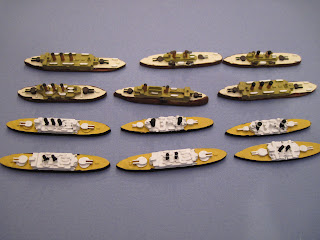 On the left you will see all twelve ships.  The Russians are on the top; with the Japanese vessels below.


By the way, I do know that the Russian Pacific Squadron had white hulls pre-war, but I'm reserving that for the US "Great White Fleet" which I'll eventually have.


For I have gone through all of the Pre-Dreadnought navies that I might eventually want to own and planned the basic paint scheme of each so that all will be unique unto themselves.

Posted by Bluebear Jeff at 4:25 AM

Some beautiful work there, Jeff, looks like they'll give some great service - can't agree more about the earlier pre-dred scheme - you just can't beat it - I can't get enough of the black white and ochre!

Looking good!! I have painted, as you know, one Japanese cruiser but using a gray and khaki scheme. But I haven't decided on a Russian scheme. Yours looks very good and I think I'll be getting some ideas from it.

How could an old sea dog not be inspired by a fleet action?

I really like the paint job Jeff. Early Dreadnaught & Pre-Dreadnaught wargames are one of my very favourite parts of the hobby - I have a couple of WWI fleets myself (British & German) that I picked up years ago - though I haven't truly found a set of rules for the period that I can rely on.
Enjoy yourself with those ships, they are spot on. Mine are just painted boring drab grey.

PS. By the way, I used my VCR to download a program about the battle of Jutland, then I copied part of the soundtrack onto a cassette tape (only the gunfire) and now use it as background whenever I play a WWI sea battle. I simply find it adds to the atmosphere.

I love the Panzerschiffe models. They're sturdy and inexpensive, a paint job works wonders. Also, if you're inclined, adding masts to the ships -- guitar strings in the .017-.020 range work well, although the stiff steel can be stabby -- really add to the aesthetic appeal of the models.

Which rules are you using Jeff (I have French, British & Russian)

I have several rule sets . . . but the first one that I think I'll try is "Naval Thunder: Rise of the Battleship" . . . but I'm also thinking of trying "Perfidious Albion".