I suppose that my biggest news is that Phil Olley asked me to contribute an article to Pilot Issue of "The Classic Wargamer's Journal". 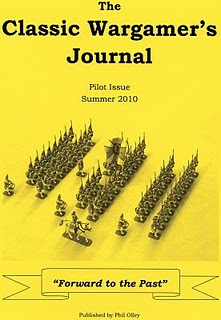 I of course complied with an article about "The Character of Commanders".  For a brief review of the Pilot Issue of CWJ, take a look here.

I've also managed to paint a dozen Panzerschiffe 1/2400 scale Pre-Dreadnoughts for the Russo-Japanese War Battle of the Yellow Sea . . . although when I'll get a chance to play depends upon a number of factors . . . amoung them being basing, choosing which rules I want to try and getting a good "sea surface".

Posted by Bluebear Jeff at 2:00 AM

Glad to have you back! It's always good to know what the "Bluebear/Stagonians" are up to. Congrats on the Article. I hope Phil's Journal has a long run.

Re ships there are some very battle mats with realistic seascapes; expensive though.

Personally, I always shudder when the blue mat appears - I don't believe I have ever won a battle at "sea". I did once lose all three masts by turning into the wind, much to the hilarity of fellow gamers.

should be "very nice battle mats."!!

Good to see you back. I like your article in the CWJ. As for naval rules, we used a plain surface painted blue for our games.

Nice to have you back posting again; and you've even got your name in print - I enjoyed your article

Welcome Back!,
-----
Recommendation: Try General Quarters. There were two versions, one for WWI and the other for WWII. Since then there have been changes but I don't know what they are. Easy system and accurate enough.
-----
When I had a WWI naval collection in the 80s I really liked General Quarters. Sometimes I wonder about restarting with larger ships. I had Panzerschiffes and some metal too from somewhere (?).
----
I've used the new google thing for a private blog. In general I like it. I can't click on photos to enlarge them and no one else can either. No good there.
-----
Bill

Glad to see you back and blogging!

I have no idea on the naval gaming. I'm strictly a landlubber!

The Reich Duke enjoyed your article on Command and has passed it along to General Staff...

and a fine article it was too. Have you considered the Hotz felt maps, with or without hexes or grids? (the latter depending on rules I suppose) they have 2 sea versions.