Some Thoughts on Artillery --

In my opinion, many rule sets assign far more credit to the effectiveness of artillery fire in the 18th century than is warranted.

To my mind, while an important factor, it was far less important than many rule sets would have us believe. This attitude is in part (I feel) due to the century's focus on science and engineering.

Therefor, in the rules I'm writing -- Bluebear's "Tricorne Wars" -- I probably assign artillery less importance than most other rule sets do. 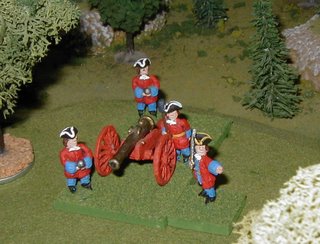 "Tilt!" I said that the photo was of a medium gun and yet there appear to be four crew?

Remember, every unit has a "Colour stand" . . . and, while these are generally flags for most units, artillery seldom (if ever) had "flags" on the battlefield. If you will note the "officer" with sword and yellow hat lace, he is the "Colour stand" for this artillery piece.

His position (beside the unit) means that this artillery piece is "rattled". If it was in "good order", the colour stand would be in front of the gun; if disordered, behind the gun stand; if shaken, behind and facing backwards; and if broken, he'd be running to the rear!

In my "Tricorne Wars" rules, while infantry's "first fire" allows them to re-roll misses, this is very unlike artillery fire. Instead, an artillery unit's first shot at a target is, in reality (or at least, in my opinion), the least likely to score a hit (they haven't got the target's range zeroed in yet).

For the initial shot at a target (or location), any artillery piece gets to fire only one of its crewmen . . . and for each subsequent shot at the same target unit or location, will get to add a second, third or fourth crewman (up to the gun's current crew number). Thus, in the photo, this artillery piece would roll one die for its first shot; two dice for its second shot and three for subsequent shots at the same target.

Note that if a crewmember is a "casualty", it will slow the gun's firing rate by lowering the maximum number of dice that may be rolled in a turn.

In this period, guns frequently kept shooting at a tartget until told to shift to a different one. As a game mechanism, the drop back to starting with a single die becomes a deterrent to constantly shifting targets.

Artillery were rarely used in massed batteries during the 18th cent.

For the WSS it was rare to see several guns together. The exception was Malplaquet where the French massed all their guns into defensive works in the center of their line. Even then determined attacks from the Maritime powers drove them out.

Another problem is that many rules simply allow too many guns in comparison to their actual percentage on the battlefield.