Well Brant and his brother Blair came over to play some "Hordes of the Things" in my new game room. 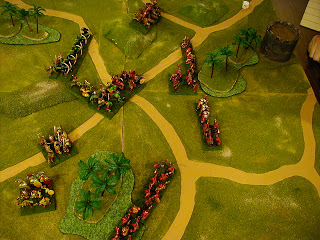 Brant had played that one game last week and Blair was an absolute newbie . . . so I gave him the choice of armies between my "red orcs" and "green orcs".

He chose the greenskins while Brant fielded the red orcs. I also made Brant the defender (since he had a game under his belt.

The fight was a good one, see-sawing back and forth. The photo to the left was rather early in the game. The scrum in the middle eventually ended up with eight stands involved in the one combat. Eventually this match-up was won by Blair, but Brant came back to win the game 13 to 11.

I suspect that they will get some forces together and play more games in the future. Meanwhile the first 18th century battle in my game room will take place next Monday night. Murdock's Burtzenia troops will face those of Pete's Duchy of the North in the Battle of Ubergang.

Looks like a great set-up with the terrain boards and minis and all! Great the players had fun!