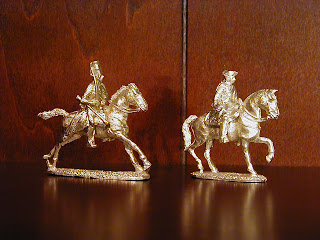 
Here are photos of some of my RSM95 "other horse". Pictured in all three photos are a Hussar (from the Prussian list); and a Dragoon (either Austrian or Prussian -- I'm not sure which).


The Hussar is holding his sabre; but the Dragoon comes open-handed. As with the heavier cavalry, the Dragoon pack comes with a variety of weapons -- carbines, pistols and swords. 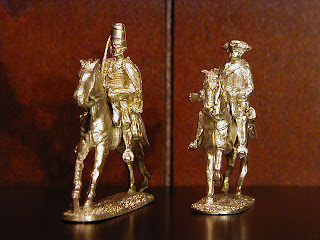 If you want a particular mix of weapons, specify it in your order. The people at DPC (who sell RSM) seem to be very helpful. (note -- I have no connection with them other than as a customer).


Riders and Horses are cast separately. The Hussar in on a "Galloping Stretched Out" horse pose (there is also one with legs bunched).


The Dragoon is on one of the Trotting Horse poses. There are some other poses as well. Be sure to specify what pose you want your troops to have. 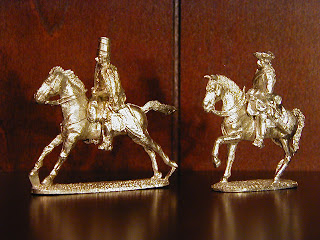 Incidentally, they also have a Hussar with Busby (on the Austrian list).


Unit bags usually come with an officer figure . . . but I don't believe that there is one for the hussars. Contact the people at DPC to make sure.

You know, I just never grow tired of looking at the incredible RSM95 figures -- even in their unpainted state! I especially like the Hanoverian horse grenadier. Hmmmm. Might just have to add some of those to the collection sometime.

They look great (as does the foot grenadier) . . . that tall mitre seems to enhance their elegance. I like it far more than the bearskin type.

when might these 'bare' troops get some 'training' (paint)?

My wife and I have agreed that I have to get certain other things done before I begin painting . . . *sigh* . . . and I'm working on those (which are not fun things at all).

Excellent photos please keep them coming. They are really helpful for me personally as I am working on the UK Big Battalion games and have not yet decided on the manufacturer. RSM look really nice and I will order some sample figures.

They do look nice. The hussar would suit Hetzenberg's Noamchomski Hussar regiment to a tee. I like also the open-handed figures, as they're much more adaptable.

Beautiful cavalry, Jeff! I'm more convinced that before that my troops will be RSM!. I confess to having my eye on some other figure-maker's "personality" figures for specific characters, but RSM's everyday folks are very very nice. Thanks for posting these photos and the ones below as well.