Well this past weekend we had our local gaming convention here in the Comox Valley (Vancouver Island, BC, Canada). 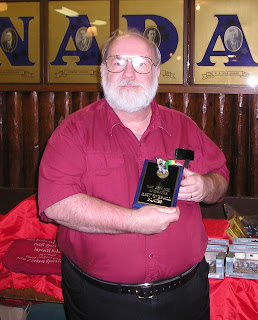 In some ways it was rather disappointing . . . and, in others, quite satisfying.

Overall the con was disappointing in that there were substantially fewer attendees than there were last year. This resulted in a lot fewer games being played.

On the other hand, I personally made out like a bandit. I was fortunate enough to play in a number of very enjoyable games . . . and it turned out that I was voted "Best Overall Player" at Dak-Kon XIII.

Yes, that fat fellow pictured above is me holding the wall plaque I received for my win. I don't know if you can make it out, but there is a gorgeously-painted mounted figure gracing the plaque.

I also received a bunch of "loot" . . . six boxes of Mongoose Publishing's "Battlefield Evolution" (three tanks and three of troops) along with the Player award (as well as a tee shirt which my wife claimed for her own).

I also won two boxes of "Star Wars -- Alliance and Empire" Booster Packs in one of the games I was in . . . and, to top things off, I won door prizes both days -- a bag of Old Glory Romans and one of Command Decision tanks.

I'm not sure what I'm going to do with all of my goodies (other than the Romans) but I certainly was lucky.

On the other hand, I'm dealing with another bout of "kidney gravel" (small stones) moving through my system right now . . . so I'm drinking LOTS of fluids and am mentally muddled with the pain pills.

It certainly wasn't a dull week.

Congratulations!! Tell me more about the Con - who organises it, what's the format, and how many came - you said numbers were down this year?? Do you have traders as well?

I'm not part of the group that puts it on . . . but they are just some local gamers.

As I suggested, it is a SMALL local convention. It runs two days (Saturday and Sunday).

The first day is primarily role-playing, some board games and perhaps some miniatures gaming (Murdock put on a Napoleonic game).

The second day is mainly a "Magic" tournament and open gaming.

I was playing games; I wasn't counting people, but I'm guessing that they didn't exceed 60 over the two days (but I could be way off).

There were no formal dealers . . . one one fellow from a nearby Canadian Forces Base brought a whole bunch of boardgames and dice to sell. I know that he sold a bunch of dice but I don't know if he sold any of his boxed games.

Here's a link to next year's Dak-Kon:

Yup Steve, the Dak-Kon is SMALL.

Always has been, but that - I think - is part of the charm.

I did a stint for 4 years on the organizing committee and managed to pull the financials and attendance out of the fire.

About 6 years ago there were 12 people attending on the saturday and 8 on the sunday (the event lost a lot of money that year).

The struggle this past year was with promotions, which is typical of small events with a changing collection of nominal 'leaders' coming from so many backgrounds that quite often do not involve any business-like attitudes.

I only hope that the event continues long enough for my sons to have some entertainment from it all...

M. le Marquis wishes you "the Joy of your Winnings", Jeff.

And good luck with the "gravel". Knock back a litre of orange juice for me!

Congrats on all the swag! I'm sure it will all fit in somewhere. I've only had one experience with kidney stones, and one was enough. Hope you feel better soon.

Forty-three Shakespearian performances on stage to your credit? You do realize that this makes you a Thesbian. Thanks for posting the photo. I'd cast you for playing Falstaff in a heartbeat. Do you have any favorite parts you have done?

But I've also played many other "character" roles in a lot of the plays that I've enjoyed . . . too many to name them all.

And since I've lost track of the total number of plays I've performed in . . . but think it is in the area of 235-240, I must confess that I am indeed a Thespian.

Small sounds good to me, its large crowds I really hate. Grats on the prizes, commiserations on the stones. James Wolfe suffered from "the gravel" prior to the Battle of Quebec.

Sounds like the gaming convention went well anyway even if numbers were a little off from previous events. And that's a handsome photo of you with your award. Thanks for posting it.

I'm with the small is best gang.