First of all, Murdock has provided an excellent write-up of the battle with some marvelous photos on his blog. 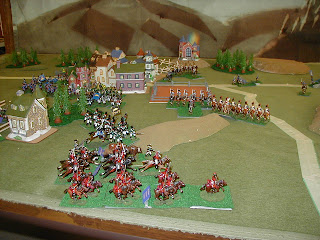 So I won't attempt to duplicate his account. My task was a different one.

As the person who wrote the rules ("Tricorne Wars"), I was looking to see how well things worked.

And, in some ways, the rules worked very well. I continue to love the "fog of war" that my "command and control" mechanisms cause.

Anyone can be a decent general when everything goes as planned . . . but what about when orders are sometimes misinterpreted? What happens when messengers are intercepted? What do you do when the orders just don't seem to be acted upon? 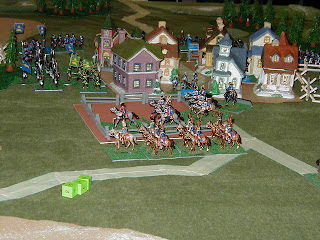 What I did not love was the "town fighting". I need to re-examine it . . . and I do apologize here to Pete for not having looked at this before . . . although this is actually the first time we've had small arms fire inside a town.

Anyway, it is something that I need to address for version .20 (which I'm currently working on).

Another issue that was raised by Stokes was where I got the buildings. Well, Stokes, they are ceramic "Christmas Village" type buildings that I picked up for a couple of bucks each during Holiday sales.

Sure, they had roofs covered with patches of fake snow. But by repainting the roofs different colors (thus covering up the snow) and also repainting the garish Christmas garlands, they look quite normal.

If you look closely, you will see that there are actually three pairs of buildings (i.e., pairs that are exactly alike -- except for the new roof colors). By repainting the roofs and turning them to different angles, you don't notice that they're the same unless you know it.

From Murdocks description it was a good game.

If you check out the TMP board on terrain, you'll find threads about converting "Christmas villages" for wargaming use. Some of the guys even Dremel-off the rooftop snow although I could see taking the easy route and painting it green and flocking it as ivy instead.

Indeed a very enjoyable game, according to a brilliant report.
I really like the houses, too.

@ andygamer: a blogger ID but no blog - while you obvious have matter to a rich one! Too bad...

Cheers to all,
Jean-Louis

Interesting subject command and control. I am inclined to the view that it is impossible to write a rule that satisfies all types of games.

By which I mean that if its a regular gaming night you may be pleased to see the rules keep ypur left wing out of the battle in a realistic manner.

However if it is an annual one off that you spent six months preparing for and travelled hundreds of miles to take part in, you are unlikely to be pleased if a dice throw prevents you from taking part.

On the whole I prefer to avoid the risk of players being left unhappy at the end of the game.

Your comment is well founded, however, given that so-far Jeff's rules have been directed at 1v1 contests, this issue has not come up. Were there to be 'more commands' in such an army I should then think that a 'upper' command would simply come up with the 'general' instructions and then permit the 'corps' (Jeffs rules are kind of a corps level, but they were not called that at the time) commanders (which would each be played by a live player) to set their orders within the larger context.

This would then have the 'activation' die rolls fitting in 'under' the live players' position. Meaning that you would only have a dull time if you either wrote foolish orders (or kept changing them) or if you rolled really, really bad!

Murdock is correct. If we have multiple players on a side, the C-in-C would still get to assign commands and to discuss with his fellows what their roles would be in the battle.

These players (in the persona of their Major Generals) would then issue orders to the Brigadiers under their command . . . taking into account their (perfectly understood) orders from above, their Officer's Personality and the Personalities of their subordinate Brigadiers.

A lot of the challenge of "Tricorne Wars" is in selecting the proper officers for their roles.

While most (2/3rds on average) of the time an officer will correctly interpret an order, there is always a chance that they will interpret it differently depending upon their Personality.

I use four types of Personalities -- Careful, Steady, Aggressive and Political.

In addition, some officers are better at overcoming their "Inertia" and actually changing their orders after they've received them.

You don't want to give an officer with a low Inertia score a command where you expect to be having to change orders often.

We've had a lot of fun with mis-interpreted orders . . . and, of course, the rationale for this is that the brigadier "on the spot" knows more about what his situation is than the C-in-C and so exercises his judgment.