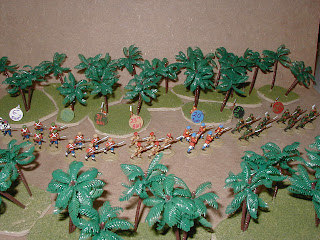 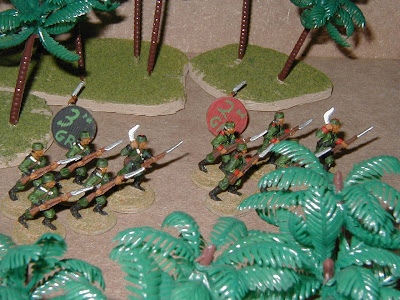 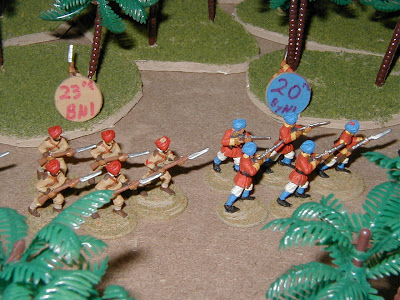 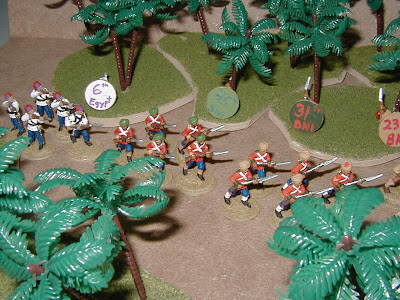 Posted by Bluebear Jeff at 1:20 AM

Jeff - my first thought would be to have a chat with Tom Dye as Minifigs would seem to fit the "true 25" bill quite nicely???

Jeff - My suggestion as well. We have both Ral Partha and MiniFigs in our Colonial armies. You might also what to take a look at Mike Taber's Historifigs line for the old (and remastered) Jack Scruby Colonials. He has some German South West Africa and French Foreign Legion figures.

You could also try Riviresco, they make some pretty nice Germans have a lot of coll naval figs and equipment as well...you should also take a look at the chart at this link:

Can't help with figures, but I am enjoying the pics!

I tried the GFI website . . . and Tom doesn't carry the figure types I want (his 25mm selection is quite limited) . . . and his 25mm prices would seem to be hard on my budget.

Historifigs, on the other hand, has definite possibilities. I've written to them but haven't had an answer back yet (okay, it is only a few hours).

The Revirecsco figures are listed online as 28mm . . . too big (and pricey) for my Ral Parthas.

Another possibility would be Frontier . . . IF they are actually still in business . . . their website hasn't been updated in over ten years.

Any other ideas, Gentlemen?

Jeff - given the exchange rates against the pound at the moment, you may be pleasantly surprised at how cheap Minifigs UK and some of the other UK based manufacturers are??

Unfortunately the Canadian Dollar has taken a nosedive too. It was worth $1.10 US a one point last year . . . today it is only worth 81 cents US.

Nevertheless, I will certainly keep your suggestion in mind.

I'm enjoying the photos of your Colonial collection too, Jeff. My own "Daftest Africa" idea follows a similar pattern.

I would echo the comment about Reviresco, and also suggest looking through the London War Room range. If you should decide to spread the net further afield Redoubt Enterprises here in England have a range of 25/28mm figures covering the Sudan, Zulu War, Boxer Rebellion (which has German Seebattalion troops) and the French Foreign Legion.

I do have some Space 1889 troops that were supposed to be able to fill in as French or German (depending on how you painted them). They are by Ral Partha.

That's as close as I can get for you.

I did not do 'darkest africa' much.

The London Warroom is no more, unfortunately. The Parroom Station figures are currently being produced by Brigade Games but the figure lines that were completely developed by TLWR are in hiatus.

And Redoubt figures are much too big to match with your current crop of Ral Parthas.