I have built more of the Whitewash City buildings for my upcoming games at our local gaming convention . . . and totally changed the layout for Grizzlyville.

I wanted a more open layout of buildings . . . both to provide more options for maneuvering (and shooting); and to make it easier for players to move characters during convention play (hopefully with no damage to my buildings). 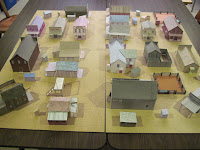 The first photo shows the view from the south -- looking north along Central Avenue.  (As usual, click on the photo for a larger image).

The southwest block contains the Brooklyn Hotel & Saloon (big red brown building; the Pioneer Hotel (at the intersection); the City Cafe (moving south); then the Gallows and the Sheriff's Office and Jail; with the Undertaker in the southwest corner (partially cut off).

The southeast block features the Livery Stable (big brown building across from Gallows); then the Grand Hotel (at the intersection); with the Gunsmith to the east; with the Dry Goods store on the far end of the block; there is a corral in the interior of the block; and the Blacksmith in the corner. 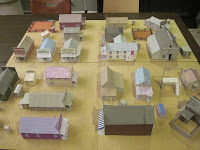 This next photo shows Grizzlyville from the West, looking east along Main Street.

The Northwest block shows the Orient Saloon (partially cut-off) at the north end of Central Ave; next to it, the small building is a Bath House; the Bank sits on the intersection of Central and Main, with the Pool Hall just to the west; and the Longhorn Saloon sits at the west end of Main Street.

The southeast block was described earlier . . . and, as with all blocks, there are numerous small outbuildings (mainly privies). 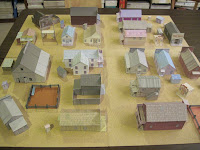 The final photo shows Grizzlyville from the east looking west along Main Street . . . and, as before, the southeast block was described earlier.

The northeast block features the Pink House Bordello at the easternmost end of the block (closest to you); just past it is Grizzlyville's Medical Building (with both doctor and dentist); and the Gold Star Saloon sits on the intersection; the Hardware Store is between it and the Imperial Saloon to the north.  It should be noted that there is another Bath House in the interior of the block (the ladies like you to smell sweet) and a large corral in the corner (barely visible).

Anyway, this will be the layout for this Sunday's playtest . . . any changes will be the result of my experience then.

Posted by Bluebear Jeff at 5:11 AM

That's quite a town! Far better than most Western skirmish layouts I've seen.

Hi Jeff, coming along leaps and bounds now - looking really good - all it lacks is some tumbleweed....!

No doubt the good citizens of Grizzleyville are lobbying their local government to be the Territorial Capital. Does the Civic Improvement Committee have any plans to build a Courthouse, or do they just hold their meetings in the bordello?!

The only western term that I connect with "hill" is "boot hill" . . . but "boot" isn't another word for gallows.

Gibbet for gallows but that's old English and not common in the wild west.

Jeff I wish I could play because it looks terrific.

I cut my wargaming teeth on Old West skirmish gaming long ago...I have fond memories as a complete newbie of outdrawing the experienced host's main character and his unlucky wound roll that came up as a kill...and us all deciding that he should get a second chance at saving himself...so he lived to see another day...now that's gaming ;)