Well, Pete, Murdock and his son, Alex stopped by today (Sunday) to playtest the "Fistful of Lead" rules which I plan to use next weekend at our local gaming convention.  Unfortunately I was too busy to take many photos, but a fun time was had by all. 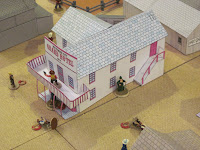 (Click on photo to see much larger image.)
This is a scene from late in the first game (won by Murdock).  You will note that the figure lying in front of the Grand Hotel's porch not only has a wound marker (the bloody washer) but is also "pinned" . . . and I thought that using a safety pin would be a fun way to indicate pinning.

While the mechanics of the rules worked quite well, the players had some good suggestions as to the layout of Grizzlyville . . . thus it may well change shape a bit prior to the Con.

Posted by Bluebear Jeff at 9:28 PM

I predict an enjoyable experience for a bunch og gamers at the con. btw I like the wound markers and yes the pins are amusing.
-Ross

Grizzlyville was a blast and Alex is really keen to run a game (or segment) at the convention!

Thanks for the game and we will take loads of pictures!