This past Saturday, Murdock (see blog address in my Links) put on a wonderful refight of the Napoleonic battle of Auerstadt on the 200th Anniversary of that battle.

I'm looking at the nice little trophy that he presented me for guiding the French to victory.

"Victory", all I was trying to do was to survive! I felt under incredible pressure all day as wave after wave of Prussians kept showing up. It was very stressful. 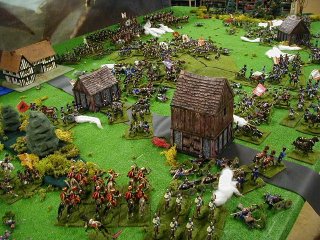 Of course, David Dinney (who commanded the Prussian side) felt equally stressed as he tried to co-ordinate his Prussian side.

He was also a tad handicapped in that he had three "part-time" players on his side; instead of Mike Pearce who was by my side the whole time . . . and whose final charge was the straw that finally triggered the Prussian withdrawal.

We used what Murdock calls his "Shako and Baton" rules. Essentially they are SHAKO with some battle-specific modifications that added greatly to the "fog of war" and the fun and uncertainty of the situation.

Kudos to everyone who participated; but especially to Murdock. Not only did he provide all of the troops and terrain used; but he also was attired in full Hussar uniform.

The photo above is from the flank where Mike's cavalry charge finally turned the tide. (Note: "click" on it for a better view).

A great game (and I'm not fond of Napoleonics)!

That's a great photo of the battle -- a table chock full of troops and scenery -- but I wanna see a picture of Murdock in his hussar get-up! Enjoy the day.

I'll ask him if I can post his picture. I don't put people's pictures up without their permission . . . but he looked great. And he even wore it when we went out to the local store on our "food break". He got a lot of smiles too.

Check out the bottom of The Arcadian Guild Murdock'S MarauderS for a picture of me in the uniform from a game a year ago (to celebrate the bicentennial of Austerlitz). The Dolman was made 2 years ago for a wedding, the pelisse was finished last year in time for the game last September...

The Arcadian Guild page will also be the right spot to have a look at the whole of the battle story, as I will be posting the best of my pics there (though you can see some at My Blog right now.