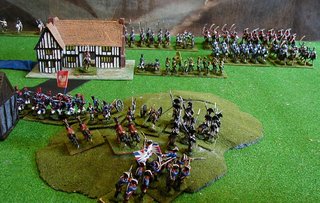 This Sunday I travelled up the coast to Murdock's game room to play a Napoleonic battle.

In preparation for an upcoming refight on the 200th anniversary of Auerstadt, we played the first part of the battle (until I had to head back in time to catch the ferry to get home).

The first photo shows the scene when the fog lifted (from behind my French lines). You can just make out General Blucher in the town ahead of my position. I took a chance and managed to capture the town (and the General!) before the Prussians could occupy it. 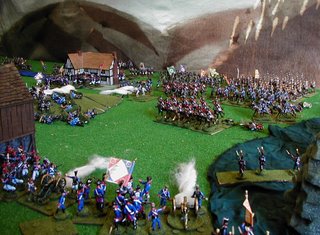 The next phot shows the game a few turns later when another French division faced far too many cavalry regiments (way, way too many). I held (and killed a lot of horses), but it wasn't a comfortable task.

We were playing a slight modification of the SHAKO rules . . . volatile and fun.

The final photo is again a couple of turns further into the game. This time looking down the Prussian lines as more and more troops flood onto the table. 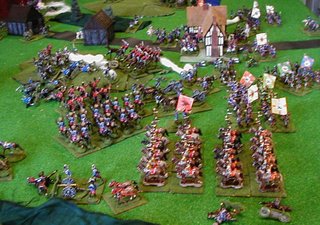 I would like to show you more pictures . . . but my digital camera let me down. I can see some more photos "in the camera", but I couldn't get them to download onto my computer.

I'm sure that Murdock will have more (and better) photos since he has a much better camera. His blog can be seen at:

I've played that battle before, but in boardgame form (part of the La Battaile (sp?) series.)

I checked out the pics and AAR on Murdock's site, too. It all makes me want to get a Napoleonic game going, but I've got so many other projects in the que, I don't know when that's going to happen.

Murdock has put a LOT of work into this project. He's painted all of the troops himself (and cast all of the Prince August stuff that you see). He's providing everything . . . a real "labor of love". I hope that there's a good turnout for the battle on the 14th.

I too am hoping for a good turnout!