What you see (and you can see it better if you click on it) is a campaign map I made some years ago.

The names are all quasi-German and it is quite suitable for an imaginary campaign. The names, by the way, were mainly created simply by changing the first letter of some current German cities. 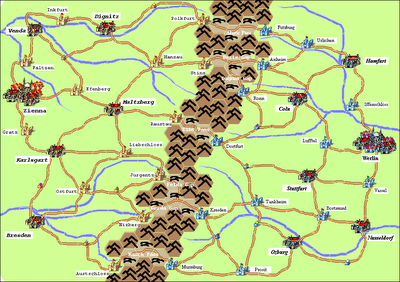 Gentlemen, if you look closely, you will see that each of the two "countries" has a capitol (Zienna and Werlin), five large cities and 13 smaller forts.

There are five passes through the mountains two of which are a sort of "doubled" pass.

If you look closely, you should be able to see faint green lines crossing the various roads. These are, in fact, the remains of a "hex grid"; but we used them as time markers for various troops using the roads.

You, of course, are welcome to appropriate this map for your own campaings, applying whatever rules seem appropriate to you. This is not the map we will be using for the "Wars for Arcadian Glory" because they will involve more countries.

Anyway, I plan to use a mapless system for the WAG conflicts.

Neat map! It's always cool to see what others have done.

Have a good day,

Thanks, Stokes. Did you notice my Colonial map (posted on October 14)?