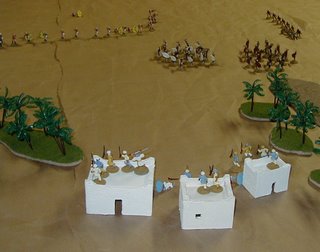 Not much happening with my SYW project at the moment . . . so I browsed through a few old gaming photos.

I pulled a few "Colonial" game shots so you can see the "Arab houses" I mentioned in the article about the "Old West" buildings (September 12).

These are even easier to build than the Old West buildings. For a tutorial, go to this website:

The first pic is a typical desert village under attack by a British unit. Native allies leap from the oasis in the village's defense. 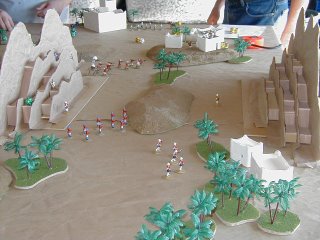 The tabletop is covered with crumpled up brown paper -- which makes a very reasonable "desert" surface.

The second photo shows a different battle. Please note the hills on the sides. Sadly, I had to leave them behind when we moved.

However, they are fairly easy to build and are very useful. Hopefully my old gaming buddy, Bill is putting them to good use.

Again, for a tutorial, visit the Major General's website at: 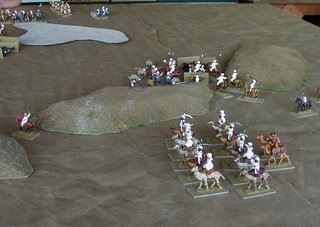 I built mine along his lines, but used balsa rather than cardboard for the strips between the hill sections (for strength).

The final two photos are from yet a third Colonial game. Picture #3 shows Arab reinforcements. While the horsemen engage a British unit just over the hills in the middle, the camel riders head for the village with the black powder that their canon needs.

The final picture is from the other end of the table. (You can barely make out the camel riders in the top right corner of picture #4). 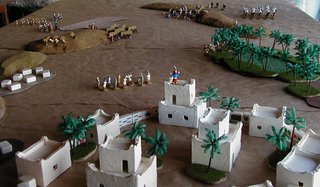 Again you see a selection of the "Arab houses" . . . and, yes those are mah jong tiles forming the village walls (as well as the ruins to the left).

For my Colonial games, I use a set of rules that I've written called "Khyber Knife". Which are sort of an amalgm of TSATF, GASLIGHT and my own ideas.

And, to end on a literary note (for those who don't immediately recognize my game title, it is taken from Rudyard Kipling's "The Ballad of East and West":

They have taken the Oath of the Brother-in-Blood on fire and fresh-cut sod,
On the hilt and the haft of the Khyber knife, and the Wondrous Names of God.
Colonials have a very different flavor than Eighteenth Century warfare -- and it makes a nice change of pace.

I just love these pics. reminds me of my early wargaming days - turning the rug over for a desert surface with books underneath for hills. then filling the playing surface with Arabs & FFL all courtesy of Airfix, complete with the fort.

Many a happy Saturday spent on my belly with an old Britain gun firing matchsticks.

It was all so simple then.

I'm glad that they bring back such grand memories. Colonial gaming can be wonderful fun, can't it.