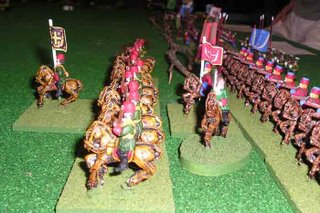 Well, due to several requests, I'm interrupting my "basing" posts to bring you some more pictures of my Great Northern War figures.

All figures are 25mm Blood Axe figures. These were made by Lance Runolfsson (not sure of that spelling) in Oregon. Unfortunately, I believe that he has retired from casting lead.

These photos are from the second playtest of my rules. The scenario was 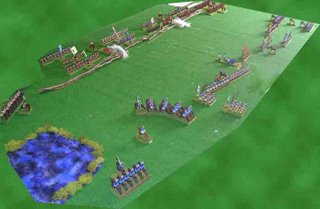 inspired by the Battle of Fraustadt in 1706, which featured Swedes attacking a mixed force of Saxons and Russians.

The first photo shows some of the Russian Dragoons who were stationed on the Allied left flank -- which is at the "top" of the second photo, which shows the overall look of the battlefield as action commenced.

Swedes are on this side of the photo; Saxons on the far side, towards the 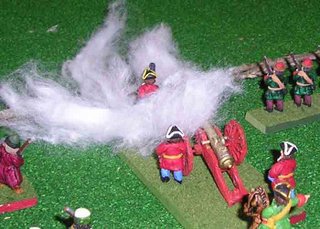 bottom of the photo; and Russians are near the top.

The next photo shows a Russian gun (the topmost puff of smoke) firing into the Swedish right.
The next photo shows the battle as the forces closed with each other. Again, the Swedish forces are on this side. Please note the "curved" line of battalions. This was achieved because the rules I'm using allow for a "brigade line" . . . but such a formation rolls its movement for both 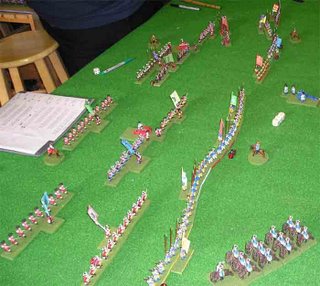 ends and the middle. This can create some (to me) more realistic-looking lines.

The final photo is from the first playtest and it shows some of the Swedish infantry units marching in column.

The flags are from Dan Schorr, whose "Northern Wars" website is a must for anyone interested in the Great Northern War.

and I most heartily recommend it. 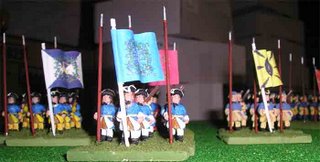 I will post more photos sometime later, so keep checking back for more photos . . . who knows, perhaps next time I'll show you some of my Danes.

Fraustadt is a most interesting batle. Swedish horse unshod trying to cross the frozen lakes. the Russians reversing their coats to try and fool the Swedes (and then taking a frightful thumping when they were found out).

we've fought this a couple of times as a disguised scenario in different periods and always with a great deal of fun as the "surprises" are revealed to the players.

Great figures and battle panoramas! Thanks for sharing your work. How big are your armies? The Great Northern War has interested me for a long time -- since a cuple of articles appeard in Wargamess Illustrated about 1988-1989. Yes, please! Some shots of your danes would be fun to see too.