Strangely enough, the history of Saxe-Bearstein starts in the late-14th century just north of the Piedmont in the Swiss Alps. Bruno Franscioni, along with a number of his fellow Swiss joined a mercenary battalion called "the Bears" and campaigned in France and the Holy Roman Empire. Over time, Bruno rose to become Colonel of "the Bears".

Eventually "the Bears" ended up in Germany in the pay of Margrave Frederick the Warlike of Meissen. It was during this time, as the Margrave sought to extend his realm into the lands of Saxe-Wittenberg, that a curious event occured. The Margrave and Colonel were enjoying a meal on a hillside overlooking a broad valley in southern Saxony.

Both being fond of beverages, they had consumed copious quantities of said beverages when out of the trees they were charged by a large bear. Bruno snatched up a knife from the table and interposed himself between the bear and the Margrave so that the bear attacked him instead. Then, with the knife, he managed to kill the bear although losing an eye and sustaining many injuries.

So moved was Margrave Frederick that he there and then re-named Bruno Franscioni as Bruno von Ursa -- in honor of the bear who attacked him. Shortly thereafter, in 1425, when the Margrave completed his conquest of Saxe-Wittenberg and was named Elector Frederick I of Saxony, he granted the lands of that valley where he'd been saved by Bruno as his fief -- Saxe-Bearstein.

"The Bears" settled into the valley and Bruno von Ursa became the first Furst, Bruno I of Saxe-Bearstein. The Italian Swiss soldiers of "the Bears" quickly settled down, marrying the German girls and started raising families. As time went on, being who they were, a great conflict started up with a neighboring valley -- Saxe-Deerstein over the respective qualities of their beverages.

Both valleys were noted for both the fine beers and wines they produced. Each claimed that theirs was better than the other -- and thus, words turned to raids, and then eventually escalated into battle. Finally, in 1509, Furst Silvio von Ursa was able to add Saxe-Deerstein's lands to his own.

Then, this newly enlarged principality settled down to happily brewing beer and making wine . . . and drinking both. The Electors of Saxony often called upon Saxe-Bearstein for military service; and they always responded well. Over time, grateful Electors added to the lands of Saxe-Bearstein until, under Rupert III, in 1583, Saxe-Bearstein had reached her current borders.

The Thirty Years War was quite kind to Saxe-Bearstein, since none of the armies romping through Europe wished to disturb the one steady source of tipple. Every campaign seemed to circumvent the fields and vineyards of Saxe-Bearstein -- but every army seemed happy to frequent the fine taverns that sat on her borders.

It is true that the Furst (Valerio von Ursa) also maintained a very respectable army (supported by the profits of the taverns), which would have required a very nasty fight if a campaigning force wished to loot Saxe-Bearstein. But most forces were wise enough to realize that the war would be a long one -- and a good steady source of drink and, er, well . . . drink was more important than a brief surfeit of booze. Besides which, had any force been foolish enough to deprive the others of their chance of a good source of drink would have gained the enmity of all other armies.

The only ones foolish enough to attempt anything were, of course, the French (who were jealous of Saxe-Bearstein's fine vintages). Fortunately the Saxe-Bearstein forces (along with the help of several other armies) were more than a match for the French.

Then, again, during the War of Spanish Succession, French forces once again attacked Saxe-Bearstein but were again soundly defeated by the Saxe-Bearstein forces. Nevertheless, to this day, the speaking of French is prohibited within the borders of Saxe-Bearstein.

Posted by Bluebear Jeff at 2:05 AM No comments: 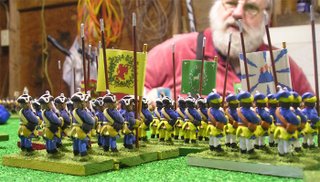 I've selected a photo from a playtest of some rules I wrote for a Great Northern War battle (Fraustadt, 1706). I'm the guy in red with the white beard in the background. In the foreground you will hopefully see the backs of some of my Swedes. Figures are 25mm BloodAxe Miniatures.

Now, I'll admit that I had a number of problems at first. I had javascripts blocked and so was not seeing any of the tools that allowed me to do a number of things (like upload a photo).

Not much to report lately. The RSM figures arrived and look good. By the way, RSM has finally added a website. It is at:

I've been planning my painting . . . once my paints are out of storage . . . (we are waiting for our old house to sell so we can buy one here in Canada -- northern Vancouver Island off the west coast of British Columbia for those who are interested).

The more I think about it, the more I'm thinking of adding some of the "Hessian" troops that fought alongside Hanover in the Seven Years War before painting the Legion Brittanique. I'm also thinking of painting some "French" troops (as some "bad guys").