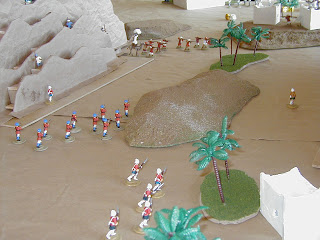 Steve Turner of At the Old Dessauer's Table and LITTLEJOHN of Lead Gardens have been contemplating "Colonial" projects.

Both have been discussing some of the terrain ideas from Major General Tremorden Rederring's Colonial-era Wargames Page . . . which is actually not a "page", but an extensive website which is generally simply referred to as the "Major General's".

So I decided to post a few photos from games that show some of the terrain features that they are contemplating. (Remember to "click" on any of the photos to see a larger version.) 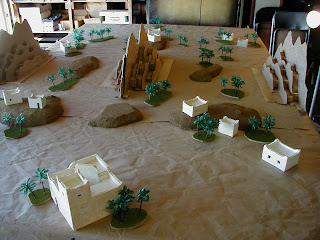 The top photo shows one of the "mountains" that the Major General builds out of cardboard. (See Lead Gardens for a look at his "scrap" versions that he put together just to get an idea of how they'd look.)

These not only provide great places for ambushers or snipers, but in line with the Major General's philosophy, they take up very little table space.

They are also very flexible as the second photo demonstrates. Here I've placed two back-to-back in the center of the table, with my other two on the sides to create two "mountain passes.

And finally, they make good backgrounds for photos. 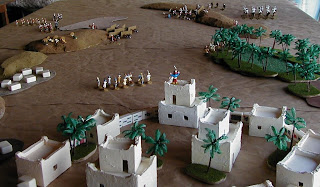 The last photo shows some simple "Arab" houses (note that they are usable for many other cultures . . . mine certainly get used on both the Northwest Frontier and in the Old West.

Using the techniques shown on the Major General's "Building Construction Page", I took my figure bases (in my case, pennies) and planned the interior roof size to fit a few troops comfortably.

I then made a few houses to hold a few more troops, then a few large enough to "nest" the smallest houses in order to make some two-storey structures with room enough for more figures in some cases.

For texturing, I used "spackle" (not sure what the Brits call it, but it is the stuff you use to patch holes in drywall. Then I used slightly different colors of "off-white" to create different looks. I was careful however to make sure that I used the same colors on those buildings that I wanted to be able to "nest".

Well my RSM order arrived . . . and it contained their Dismounted Dragoons . . . and 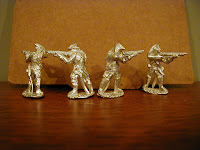 here are some photos of them straight out of the bag. (Remember to click on them for a larger image).

By the way, although their website hasn't yet registered the changes, they've increased their prices a bit . . . but they are still amongst the most reasonably priced figures around. 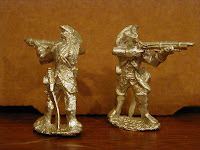 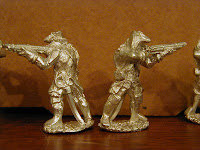 A brief note on these figures. I didn't even really look at them (I'm zonked on pain medication for kidney stones). I just opened the bag and grabbed four figures. I didn't look for flash or bent metal . . . and I can see a bent scabbard now.

Anyway, here are some raw photos for your evaluation.

Inspired by reading some of the Accounts of gamers using the "Mythic Game Master Emulator" (the one with the blue cover), I've decided to try running a solo adventure using it.

Sorry, I'm not placing this initial trial in the Eighteenth century . . . or even on Earth. Yes, I'm running a Fantasy adventure (please forgive me). Because of that, I'm not adding it to the "Emperor vs Elector" blog lists -- but I have added it here.

It is called Mythic Fangharm Quest and so far I've just set the scene . . . now I'll spend a few days re-reading the GM Emulator to make sure that my pain med muddled mind understands it.

Anyway, take a look if it interests you.