One of my "long range" projects is to build some English Civil War armies. But being as I am an American now living in Canada I have very little knowledge about that conflict. 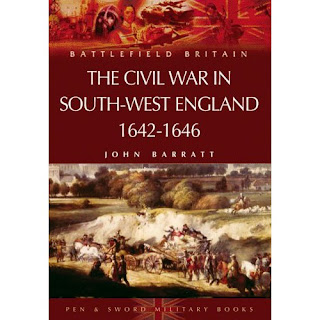 Yes, I have a number of rule sets . . . and NO, I haven't picked one yet because I don't know enough about the conflict to choose wisely. So obviously it is time for me to do some reading.

Yesterday's post brought a copy of John Barratt's "The Civil War in South-West England 1642-1646" which I hope will provide a good background for that ECW theatre.

It should cover the campaigns pitting Hopton and Waller . . . neither of whom I had ever heard of before starting my inquiries into this period.

Of course I HAD heard of Prince Rupert before . . . it is a community on the northern coast of British Columbia (less than 180 miles from me) . . . but I had not known that it was named for the ECW general: 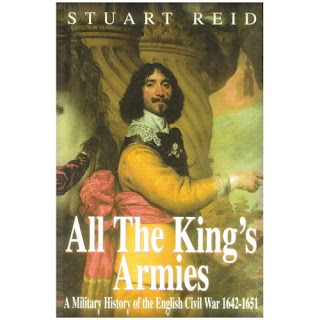 "All the King's Armies" by Stuart Reid is another volume that arrived recently. It comes highly praised by various posters on the TMP English Civil War Message Board.

It presents a broader picture of the war . . . covering the armies and events in other parts of Britain (at least I think that it gets into the northern war where the Scots had lots of action).

I would love to do the ECW using Sash and Saber's lovely 40mm figures . . . such as those featured on the Lead Gardens and For Ye Kinge blogs.

However I do not think that my pocketbook could handle the burden (particularly with the cavalry for much of the ECW is quite cav heavy). So I suspect that I will eventually have to join the Old Glory army club and use their 25mm figures . . . and fortunately it is supposed to be one of their better lines.

However I am still a LONG way from getting figures . . . and it isn't like I don't have other projects to work on . . . but right now it is simply "research time".

While reading Steve-the-Wargamer's blog, I was reminded of my easy method for making split-rail fences for the War Between the States. 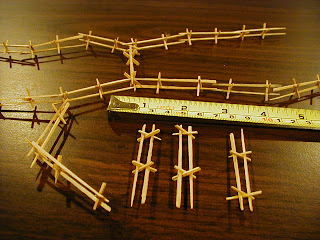 These fences are really simple to make. Start with flat toothpicks. Cut some into sections about 5/8ths of an inch in length. Glue these into "X" shapes.

After these have dried, glue full-length toothpicks into opposite sides of the Xs. (note the three segments lying sideways in the photo -- while they obviously stand the other way --these give a better idea of how the fence segments are constructed.)

Now you can place the "long" end of a segment against the "short" end of another to get the right look to the fences. And these are very flexible. They can be used to make either straight fences or the irregular fences so common on the rural frontier.

The best part is that these segments are pretty mindless to make. You can do it while watching TV . . . or if you have children, you can probably get them to make them.

Finally I will note that they probably should be painted grey since that is what most weathered fences I've seen look like . . . but they will look okay even if left as is.