Significant changes are ahead for the armies of Saxe-Bearstein and those vile Stagonians. These armies are composed of Great Northern War and War of Spanish Succession Bloodaxe Miniatures which I purchased from sculptor Lance Runolfsson well over 20 years ago. 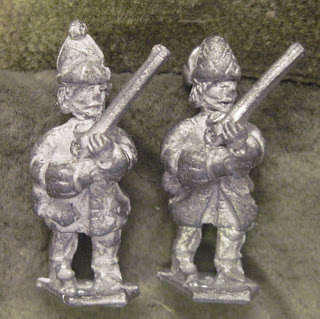 I recently learned that he had sold his moulds to Historifigs.  And today I got an email from Mike at Historifigs that he had finished casting some much-needed figures that I have long wanted.

Beside ordering more musketeers, I will be receiving both WSS and GNW Grenadier figures (seen at left).

While Lance's figures appear rough in their lead state, they paint up very easily and look good on the table top (at least to me).  (You can see some in the masthead photo).

While it will force me to re-paint some figures, the Grenadiers will allow me to paint my standard battalions of 24 men with six 40mm square bases of four figures -- one stand of which will be Grenadiers who can be detached to form a unit of combined grenadiers in each brigade.

I will also receive some figures to build two more "irregular" units (each army already has one, but this will double it).  These are also based four to a stand . . . but on the larger "cavalry" stands (nominally 50mm square but mine are actually 47mm square so that they will fit in my display cabinet).  These are based in a loose diamond formation of 1-2-1.

Speaking of Cavalry stands, I should also receive enough Hussars to add another regiment to each army.  Cavalry units have six bases of two horses each.

When finished (and, yes, I will have well over 200 figures to paint or re-paint) each army will have the following units (as well as a mix of Generals, Brigadiers, Aides-de-Camp and Artillery):
Once I've finished with this, I will be able to play out all of the "mini-campaigns" that folks submitted using various Charles Stewart Grant "Scenarios" and "Table Top Teasers".