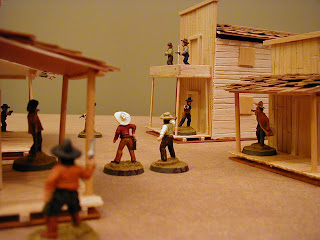 Due to some 'real life' stuff I've not been able to game for a while -- hence the lack of recent posts.

I still haven't played anything (gotta finish some 'honey dos' first) . . . but after my last post about converting 'Christmas houses' to gaming terrain, I realized that I haven't given you a good look at my scratch-built 'Old West' buildings.

Remember to 'click' on the photos to see larger versions of them. 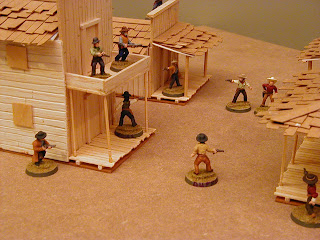 Now I'm the first to admit that I've seen far fancier and more detailed buildings on other blogs . . . but these were actually very easy to build and I think that they look very much like I suspect a lot of the actual buildings did . . . that is to say, a bit rough.

Incidentally, I think most of the figures are from the Old Glory 'Warpaint' line (although it is possible that a Dixon or two crept in).

What you see are four buildings. A hotel (with the balcony), a fancy saloon (wrap-around walk) and a couple of miscellaneous buildings. 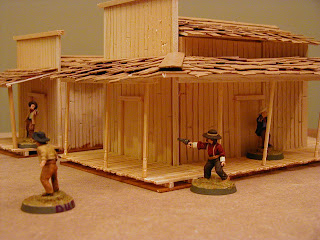 All are foamcore shells covered with thin sheets of balsa. If you look closely you will see that the 'planking' on these buildings were simply scribed into the soft balsa with a dull pencil. And don't forget to scribe some board ends.

Okay, I cheated with the windows. They are just squares of craft sticks glued on (I was in a hurry). The sidewalks are made of craft skewers that I've trimmed the pointed and rounded ends from.

By the way those 'fancy' posts (the ones with the 'lathe work' are the fancy bamboo toothpicks that you can often find in supermarkets. (Note that they also make nice flag staffs and for the chunkier figures they're not bad lances). 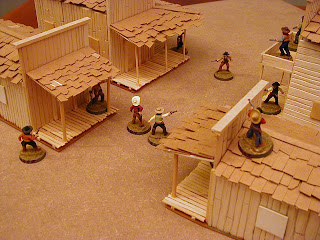 The shingles were particularly easy to make, by the way.

They are simply strips of card cut from cereal boxes, then made into 'combs' (i.e., irregularly spaced vertical cuts not quite through to the 'spine'). Then cut alternate 'teeth' short and at slight angles.

Overlap the strips and you've got a nice irregularly looking set of shingles. 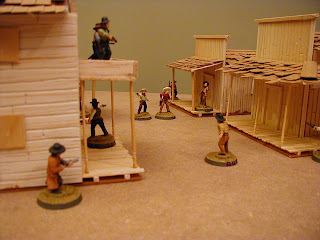 Oh yes, the doors are simply defined by some balsa strips to 'frame' them. And I've capped the 'false fronts' with another strip of balsa.

By the way, if you are scratch building your own Western town, I heartily suggest that you do not make 'square' buildings.

Rectangular ones give you more options. Also try to vary the heights of the 'second storey' of the buildings . . . remember that these were not designed and built by professionals. They are NOT built to any sort of architectural standards . . . people just made do as best they could.

Today I purchased another bunch of "Christmas Houses" for gaming. Our local Zellers (a department store) had a bunch of these ceramic houses on sale for $2.24 Canadian (approximately $1.88 US or 1.47 Euros).

I bought eight . . . two of one pattern and one each of six others. Each has a "footprint" around the size of an index card . . . and they are great for 25mm table top terrain. 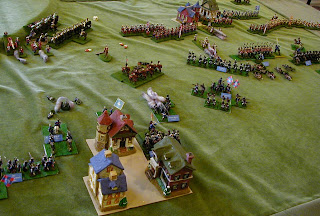 Well good once you've painted over all of the 'snow' and obvious "Christmas" decorations.

Take a close look at the photo to the left (i.e., click on it to see the larger version). You can see where I've just painted over the 'snow' on the roofs of the buildings at the bottom of the photo.

These buildings were from a previous year (the photo is from the Wollmitz game earlier this year). 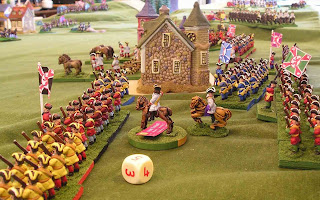 The second photo shows another shot from the same game . . . but this time is one one of the ones that Murdock took during the same game.

Clicking on the above link will take you to his account of the battle . . . and he takes much better photos than I do.

Careful readers will note that I purchased two of one of the buildings. By painting the roofs different colors (and turning them a different angles) they really look like two different buildings. The Wollmitz game actually had three such 'pairs' on the table top . . . although I placed them in different locations.

However do be careful . . . some of the buildings you'll find have automobiles or other modernisms that preclude them if you're going to use them for earlier periods . . . but remember that you can paint over signs, etc..

So take a look as you're out doing your Holiday shopping . . . many stores carry this type of building . . . and some are pricey . . . but a lot of them are very inexpensive and quite useful for the table top . . . and each year seems to bring new patterns of them so it is easy to build a very nice collection rather quickly.

Today Jerry, a gamer new to our area, stopped by for a visit. He has three blogs. His main one is Hlynrian, where he discusses not only his gaming, but his attempts at sculpting 25mm Tricorn troops as well.

He is also in the formative process of founding two 18th century 'imagi-nations' -- the valiant Duchy of Frisland and its mortal enemy the scemingly nasty Duchy of Loathar.

Of course my characterization of these two duchies is perhaps slightly colored by the fact that Frisland is aligning itself with my own Saxe-Bearstein; while the loathsome rulers of Loathar even sent the heir of the Duchy to be fostered in vile Stagonia.

Anyway Jerry and I discussed a number of things. One of these was the fact that I'm 95% convinced that I should alter the movement rates for my "Tricorne Wars" rule set.

This is a change that has been some time in the making. On Murdock's 4' x 8' table the current rates were okay . . . but sometimes a bit ponderous. On my own 5' x 10' table I noticed particularly in our Wollmitz battle that they are just too slow.

So, as I discussed with Jerry, I've virtually decided to increase the movement in version 0.2 of my rules. More details in a future post.