Today I got a whole bunch of new bases cut for my Saxe-Bearstein and my vile Stagonian 18th century armies.  Mind you I didn't cut them myself; but thanks to a friend with a bandsaw who cut them for me, I now have over a hundred bases each for both infantry and cavalry.

For those who don't know, I live about a third of the way up the east coast of Vancouver Island, British Columbia, Canada.  (Note that Vancouver Island and the city of Vancouver, which is on the mainland, are quite different places).  This is hardly a hot bed of miniature gaming, so I don't have to worry about matching my basing to anyone else's.

I have found that I really like square bases.  And I like thick bases (blocks of troops can be moved more easily).  So I purchased a quarter sheet of 1/4" MDF (medium density fiberboard) and my friend Stuart cut a lot of it into 40mm squares for foot and 47mm squares for cavalry.

So that, of course, was the easy part.  Now I have to remove all the figures from their current bases before I can place them on their new bases.  But first I will paint the sides of the bases (which is much easier to do en mass before they're attached to figures).

This rebasing is something that I decided I'd do back when I was flat on my back in the hospital.  Now all I have to do is get it done . . . which won't happen quickly I'm afraid since I still do need to take lots of naps during the day . . . nevertheless, a start on the project has been made.

While the above title is usually given to the Olympic Decathlon winner, I do not believe that it is correct.  I believe that the winner of the Modern Pentathlon is more deserving of the title.

The decathlete competes in ten various Track & Field events.  The pentathlete competes in five totally different sports.
The obvious wargaming connection is that the event was designed to test the skills that an Aide-de-Camp  might have to use in the course of his duties.  This echoed the Ancient Greek pentathlon which tested the skills of the ancient soldier (actual events unknown to us).

Unfortunately the Modern Pentathlon does not get much "Western" notice because it has been dominated by Eastern European nations . . . and some want to see it dropped from the Olympics. 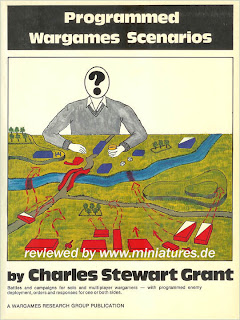 On March 28, 1990 I purchased a copy of Charles Stewart Grant's "Programmed Wargames Scenarios.   I know this because it still has the receipt in it . . . probably because prior to today I had not really looked at it because it was basically for "solo wargaming" and I play with other people.

Well, while I dohave some available opponents, I'm still tire very quickly because of my cancer surgery . . . and will probably continue to do so once the chemotherapy begins.

So, since I don't have the stamina to face a live opponent for very long (I keep having to take naps); today I started to take a good look at Grant's book.

And it looks like it will work very well.  I can see using it to play some "mini-campaigns" (two have been created using these scenarios):
Mind you, taking over 22 years to look at this volume wasn't the smartest thing I've ever done . . . but it looks like I will finally be getting it right.