At present there are only three "heavy horse" (i.e., true cavalry) units in the army of Saxe-Bearstein.

They are headed by the premiere unit in all of Saxe-Bearstein, the Horse Grenadiers.

Selected from the best cavalrymen from throughout the Principality, the Horse Grenadiers are the only mounted unit permitted to wear Saxe-Bearstein Red.

The Horse Grenadiers' facing color is black; and they serve almost exclusively as "guard cavalry".

This distinguishes them from the Dragoons in their buff coats and the Hussars who emulate rainbows.

Stagonia Gets its Own Blog --

Well, it was probably time. The arch-enemy of Saxe-Bearstein (the Kingdom of Stagonia) now has its very own blog.

Currently there is a post with samples of their various types of infantry flags. To see it, go to:

It is, of course, ruled by Maurice von Hirschbock. He is a very VILE monarch . . . and quite mad. His heirs are, if anything, even worse than he is. Beware of them.

I've filled a gap in my "Tricorne Wars" rules. Previously, other than morale penalties, I had no mechanism to cover the situation when units suffered massive casualties. So I've now added the following:


"When units are reduced in size beyond a certain point they can no longer rally to improve their Cohesion. These size limits are:

Hopefully this will serve to alleviate the situation where only one or two figures were left in a unit.

First, allow me to thank all of those who've posted their wishes for my health. I am feeling better and I thank you all for your concern. While painful, the "gravel" is not nearly as bad as "real kidney stones" -- those have put me in hospital before. The gravel are sort of mini-stones (about like some grains of sand). They are painful and very fatiguing, but they do pass.

Because of all that needs to be done when moving into a new place, I have not been able to get much work done on my "game room" yet; or to do any painting on my RSMs (they're still bare metal). I have, however, been rebasing some of my GNW figures so that they will serve as "Tricorne Wars" figures.

First I tackled the Swedes so that Pete would have some troops to push around while he's been painting his. He had two full battalions painted along with a general for the last game.

While I've been sidelined with the gravel, I've been working on doing the same thing with my Saxons and Poles so that I can use them to "make do" for Saxe-Bearstein figures. So far I've got three battalions finished, two almost finished and one that still needs a lot of work.

You see, it isn't just re-basing . . . I've also had to re-paint facings so that the figures within the units match each other . . . since "Tricorne Wars" has much larger units than the rules they were originally based for.

I can hear some of you now . . . "why not buy some new figures to complete the units?" . . . I would except that they are no longer available . . . and don't mix with anything else. They are some of Lance Runolfsson's "Blood Axe" miniatures. They are quite rough and chunky . . . very easy to paint and I like them a lot . . . but he's not been in business for years now.

While I'm still rather zonked on pain meds, I won't try to discuss some of the changes in "Tricorne Wars" that this last playtest has prompted, I think that I can post a few flag templates for mounted troops.

As with the Infantry flag templates which I posted on June 16th, I urge you to come up with something to grace the central ovals and Heavy Cavalry blanks.

This could be an heraldic animal such as lion, eagle, unicorn, dragon, wolf, etc. . . . or it could be the ruler's stylized initials . . . or whatever as long as it has significance for your imaginary nation.

Dragoon standards were almost always "swallow-tailed". I offer you three variations. The first (at the top of this post) is a quasi-French style. The next two are more Germanic and allow for either a tall or wide oval theme.

Note that Dragoon standards frequently had two different colors in the field . . . one of which was typically the unit's "facing color". The other color might be white or a "national color" or something that just went well with the facing color.

Both Dragoon and Cavalry standards were both quite often "fringed". This fringe was very typically in the same metal as the unit's "button color".

Finally, while fairly boring, the final flag was typical for true cavalry. A small fringed flag that typically had only one color on its field, the central device might or might not be contained within an oval.

You are free to use (and abuse) these very basic templates as much as you like.

You might also wish to visit "Warflag.com" to get more ideas. Here's a link:

I am currently zonked on painkillers (back problems), so I will probably not make too much sense regarding my comments on Sunday's "Tricorne Wars" playtest.

I see that Murdock has written a rather extensive account of the battle on his blog. See:

I haven't tried to read it yet since my medicated attention span is almost non-existent. Trying to follow anything is tough right now. But I did take some notes on things during the game.

The big one is that I have to reduce the number of skirmishing foot troops. I've always maintained that they did not have much of an effect on the European battlefield during the first two thirds of the eighteenth century.

Admittedly, the competitors die rolling (to see how many skirmishing stands were involved) virtually maximized the number of available skirmish troops. Please note that I'm talking about Jager-types, not Grenzer-types. There were far too many (on both sides) and yesterday they played too significant a role (in my opinion). So I have to re-evaluate my Skirmish rules.

Next, one of Murdock's commands spent five turns failing to overcome it's "inertia roll" so that it could act upon it's orders . . . then, with the Nordic troops advancing over the hill in front of it, they finally got to act upon their orders . . . except that when their Brigadier made his interpretation roll, he understood them to be "Withdraw" and began to leave the battlefield.

As it happened, this was actually not a bad thing at all for Mieczyslaw . . . but the important thing for me was seeing how my "Command and Control" mechanisms could work the way I intend them to.

I'll publish more thoughts in a day or two when I can think cohesively (it has taken almost 35 minutes to type this out -- many too many corrections necessary).

This coming Sunday should see another "Tricorne Wars" playtest. This time we may have a new player as well. I say may because we are currently suffering through a very nasty heat wave.

How nasty . . . well we are getting some all-time record highs here on Vancouver Island. Not just all-time highs for the date . . . all time highs for any date.

One of the results of this is that I have not been able to do all that I'd like in terms of work on the rules . . . the computer room is the warmest room in the house . . . so I've mainly been reading down in our "basement".

Well, it isn't really a basement, but it is about halfway underground, so it is cooler than the rest of the house . . . which wasn't all that cool today.

Hopefully Sunday will be cooler . . . a lot cooler.

Here are the first two Dragoon units that the Saxe-Bearstein army will muster.

David of "Not by Appointment", are you happy now?

Well, the Battle of St. Argard was won by Mieczyslaw today as the army of the Duchy of the North learned some hard lessons. 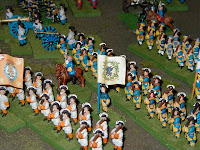 Accounts of the game will no doubt be found on the blogs of the two combatants, so I won't go so much into game details but instead focus on the action of various rules from my "Tricorne Wars" rule set.

One of the lessons learned was that "Deployment" needs more thought because it is very important.

Thinking about what your battle plan is (and what you expect your opponent to try to do) needs thought.

The Nordic player failed to think about h0w much room his troops would take up . . . and essentially 'pinned' himself in a corner -- forcing his units to be too constrained. As it turned out, none of his six battalions of infantry ever fired a shot!

Both players were, I think, a tad stunned (and I was delighted) by the difficulty in getting forces moving.

In "Tricorne Wars", Generals and Brigadiers have 'personalities' (Careful, Steady, Aggressive and Political). These personalities affect how they respond to and interpret their orders.

Both players began the game with units "on table" under temporary Hold orders -- with their "real orders" known to them. But in order to get their brigades moving, each brigadier had to overcome their "inertia".

Careful Brigadiers have an inertia rating of 1; Aggressive, a rating of 3; and the other two personalities have an inertia of 2. Being under Hold orders gives you a +1 to your rating. This meant that a Careful Brigader had to roll a 1 or 2 on 1d6 to be able to get his brigade moving the first turn . . . as it turned out, only one brigade on each side got "activated" in turn one. 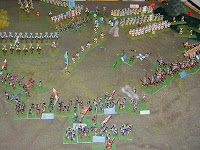 On subsequent turns, the Brigadiers also got to add their "initiative" ratings as well (mostly ones, but a few twos) -- still, rolling a six always fails.

This succeeded in causing some anxiety on the part of the players as they didn't know just when their brigadiers would begin moving.

Then, when they get close to formed enemy (everyone ignores skirmishers), the brigadiers have to test to "interpret" their orders. The personality of the C-in-C has an effect on their interpretation . . . and one of the Nordic brigades almost turned around and left the battlefield . . . re-interpreting "Advance" to "Delay" . . . and then refusing to receive new orders!

Different orders affect how many "pluses" a unit might have for its "charge test" . . . and, again, this hampered the Nordic cavalry as a number of times they refused to charge and became disordered . . . each time failing by one pip because they were under Advance orders instead of Attack or Assault . . . and it might have made a big difference because as it was they got shredded by musket fire instead of forcing the infantry to make "charge response tests".

One of the goals of "Tricorne Wars" is to cause a few unexpected responses to complicate the life of the C-in-C. Murdock did a fair job of countering that to a certain extent by assigning tasks to brigadiers according to their personalities . . . and he won the battle.

Yes, I learned some more things that I need to adjust . . . but all-in-all I was rather pleased with what happened rule-wise.