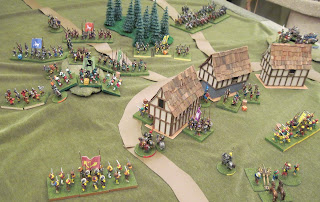 Posted by Bluebear Jeff at 10:49 PM No comments:

After a couple of preliminary marches, the 16th century Duchies of Alpia and Stagonia are poised to go to war.  Both are striving to take and hold a key crossroads.

As you can see in the photo, Stagonia's Brigadier Arnoux (to the left) is closing in on the Crossroads as is Alpia's Brigadier Franscioni (from the right).

In the distance you can now see that Alpia's Brigadier Lombardi's cavalry column is approaching the village seemingly unopposed . . . or is he?

To follow this conflict, check out the following blogs:

Well I finally managed to get my game table cleaned off and set up the terrain for the first battle of "The Alpian Wars".

No photos yet because the two generals Giovanni Rossi of Alpia (Ross Macfarlane) and Maxime Murdeau of Stagonia (David Murdock) have not yet discovered their opponents positions.

The various blog links above will take you to blogs for the Wars in general and the two sides . . . not much there yet, but hopefully there will be as time moves on.

Wednesday I begin a new cycle of chemotherapy but at a reduced dosage . . . so hopefully it won't throw me for as much a loop as it has been doing.

Well today I finished painting some barrels as markers for "limited powder" for the (hopefully) upcoming battles.  I've also got two gamers who will "run" the respective sides for the "Alpian Wars" . . . and I've created blogs for the mini-campaign.

But overall things are going slowly on my end.  I am amazed at just how debilitating the "chemo fatigue" is.  It takes an effort of will to just stand up.  Walking into another room leaves me huffing and puffing; and walking up the stairs usually requires a rest on the way.

I'm almost through the two week break they've between chemotherapy cycles; but I have chemo scheduled for Wednesday . . . *sigh* . . . I know that it is helping me but it really is stressful.

Hopefully I can get the first battle of the Alpian Wars started soon.

Well I was to have reached the half-way point in my chemotherapy yesterday . . . but the cancer doc has given me a two-week break before we resume the chemo regimen.

Why?  Because the level of my fatigue and shortness of breath worried him.  So I ended up spending 8 hours in hospital undergoing a bunch of tests and scans to rule out potentially dangerous possibilities . . . which they did.  I don't have a blood clot or heart disease, I have not had a heart attack, etc.

I'm just exhausted from the chemo.

So perhaps during this two week "recovery" break I can actually manage to get going on my hoped-for mini-campaign using Clarence Harrison's "Victory Without Quarter" rules (slightly modified for my "Alpian Wars" 16th century setting).

I have been thinking about asking a few fellows to help in terms of making some of the initial choices for assembling commands and setting orders of march and so forth . . . to make sure that I don't "rig" the battle against those vile Stagonians.

Frankly the troops are ready but my table isn't.  It has lots of stuff on it that I just have not been able to gather the energy to clean up.  And I still have to make roads.  I purchased vinyl for this months ago but have yet to cut it into roads . . . *sigh* . . . I just didn't realize how totally fatiguing the chemotherapy would be.

But hopefully I can recover enough in this two week stretch to get started on the "Alpian Wars".