Lately I've been wanting to play some Colonials. 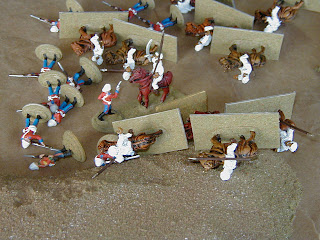 And I think that I want to play some "The Sword and the Flame" as opposed to the rules I wrote about ten years ago.

Well because TSATF is a very good set of rules. It has been the leading (as in most played) set of Colonial rules for over 30 years . . . and, as in the photo above, fights often come down to a very exciting finish.

I last played Colonials in California. I had (and still have) the Imperial forces . . . but my friend Bill S. had (and still has) all of the Native forces. So we're now 1200 miles apart and in different countries.