My Sincere Thanks to Murdock

Murdock and his lovely bride visited us for a few hours today . . . and while our wives visited upstairs we descended into my War Room and worked on my ECW Cavalry.

David helped me greatly by doing a lot of the tedious prep-work on many horses as well as some detail painting on several dozen riders.  While nothing is that close to getting on the table yet, they are a heck of a lot closer now than they were this morning.

So a great big "THANK YOU" to my gaming buddy for his wonderful assistance today (as always) . . . and a heartfelt wish for him (and the rest of you) for a wonderful and game-filled New Year!

Well I just realized that I had yet to post my annual photo of our "trees".  Alas we are now limited to using artificial trees since I have not regained my strength since my illness and cannot deal with the real ones.  So here I am with our "porch tree": 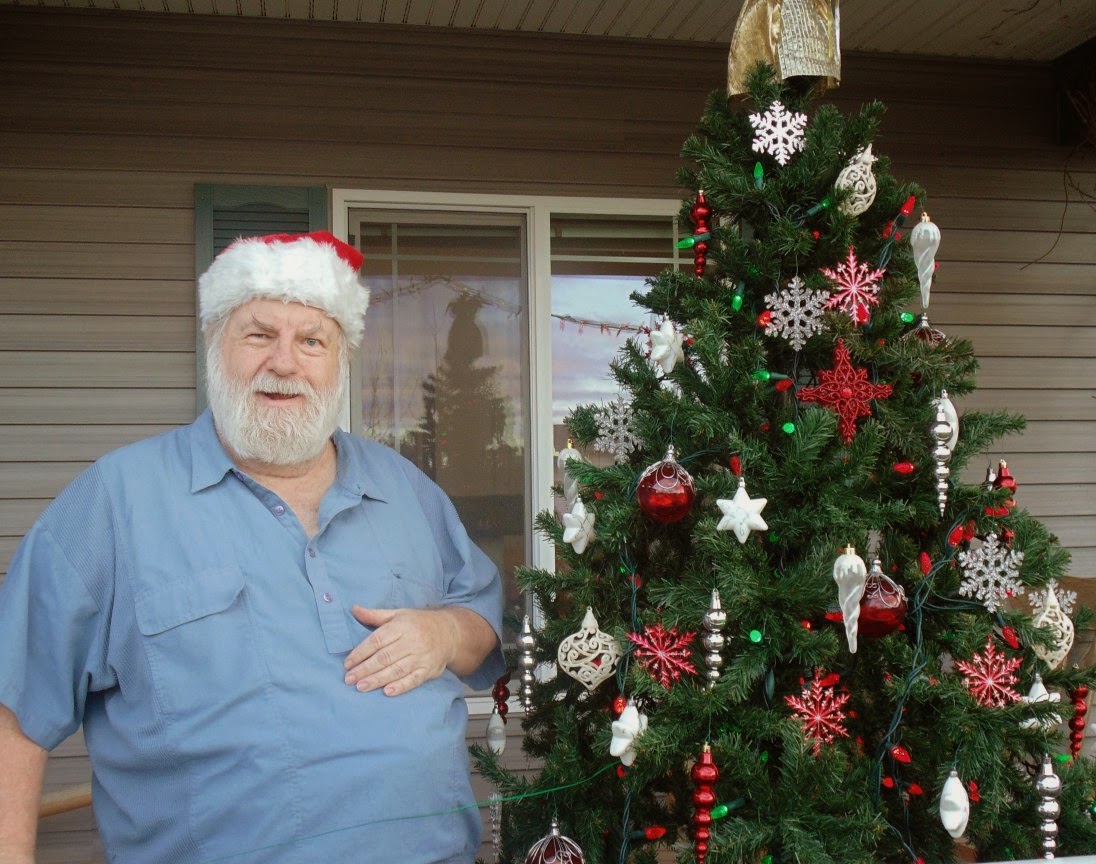 And here is what the porch tree (and lights) looks like at dusk: 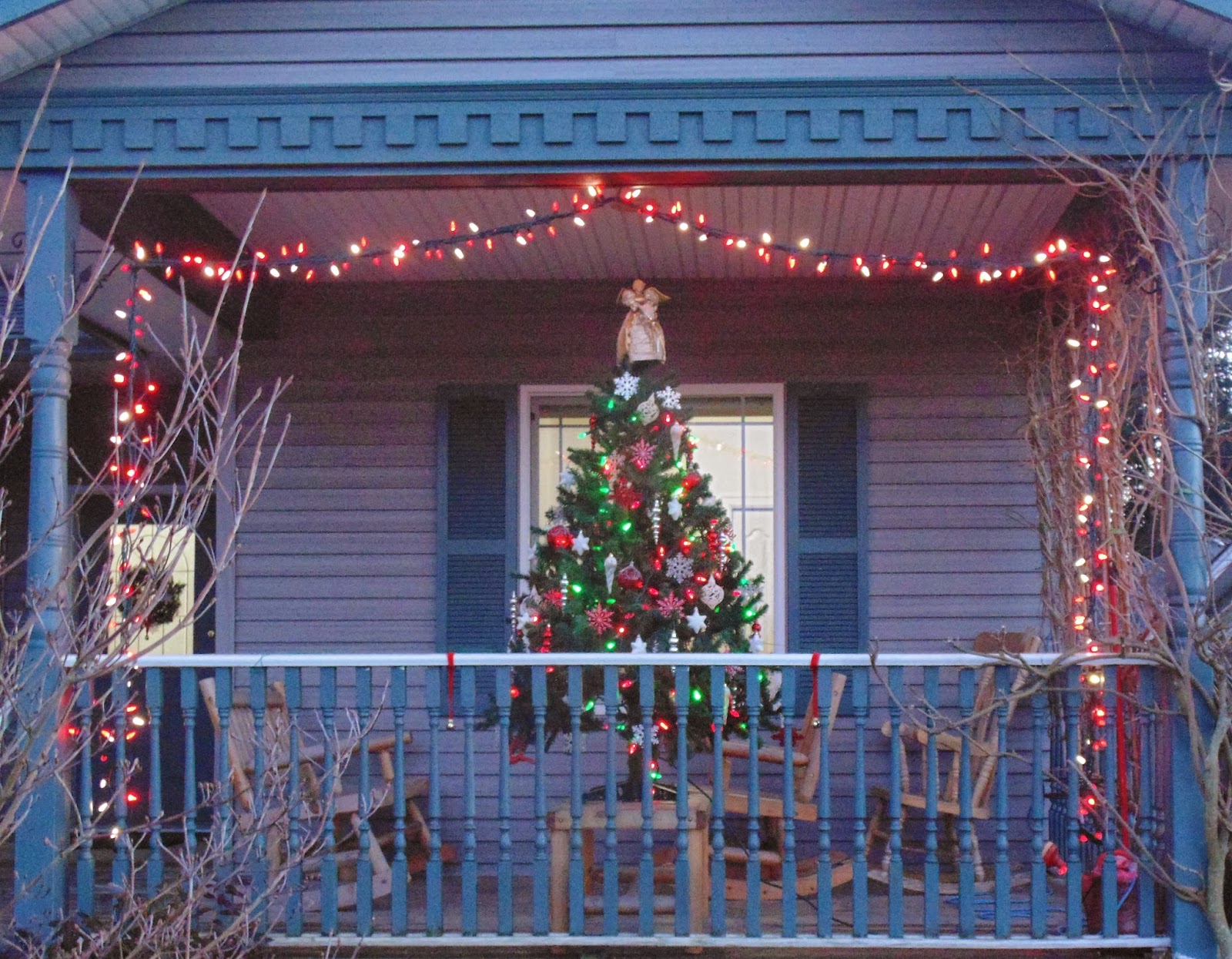 Meanwhile, inside the house, we have our Yule Tree: 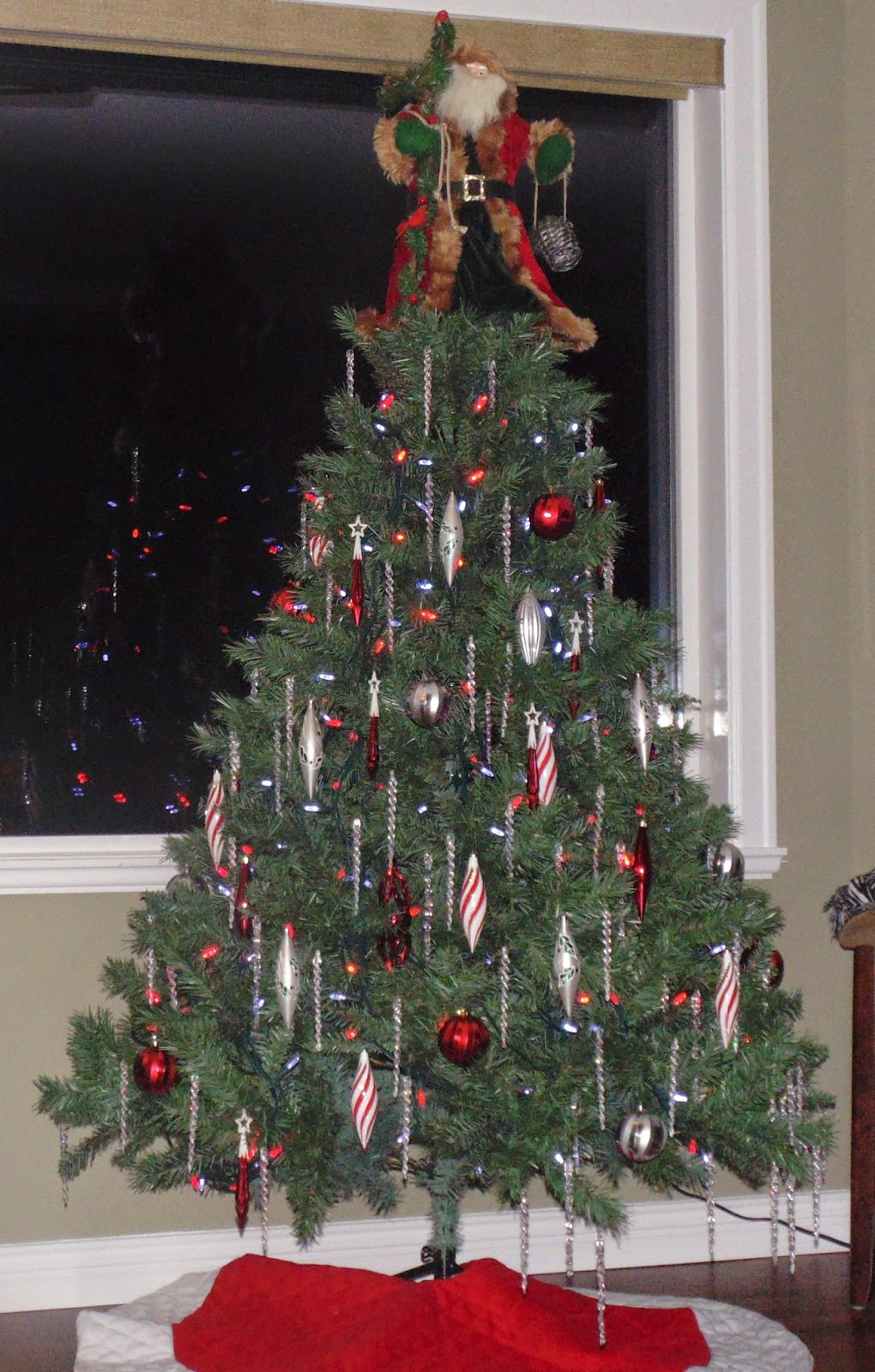 And finally, in order to get some sort of "Christmas Tree Scent" in the house we have a bunch of fir boughs in a vase with decorations in our great room: 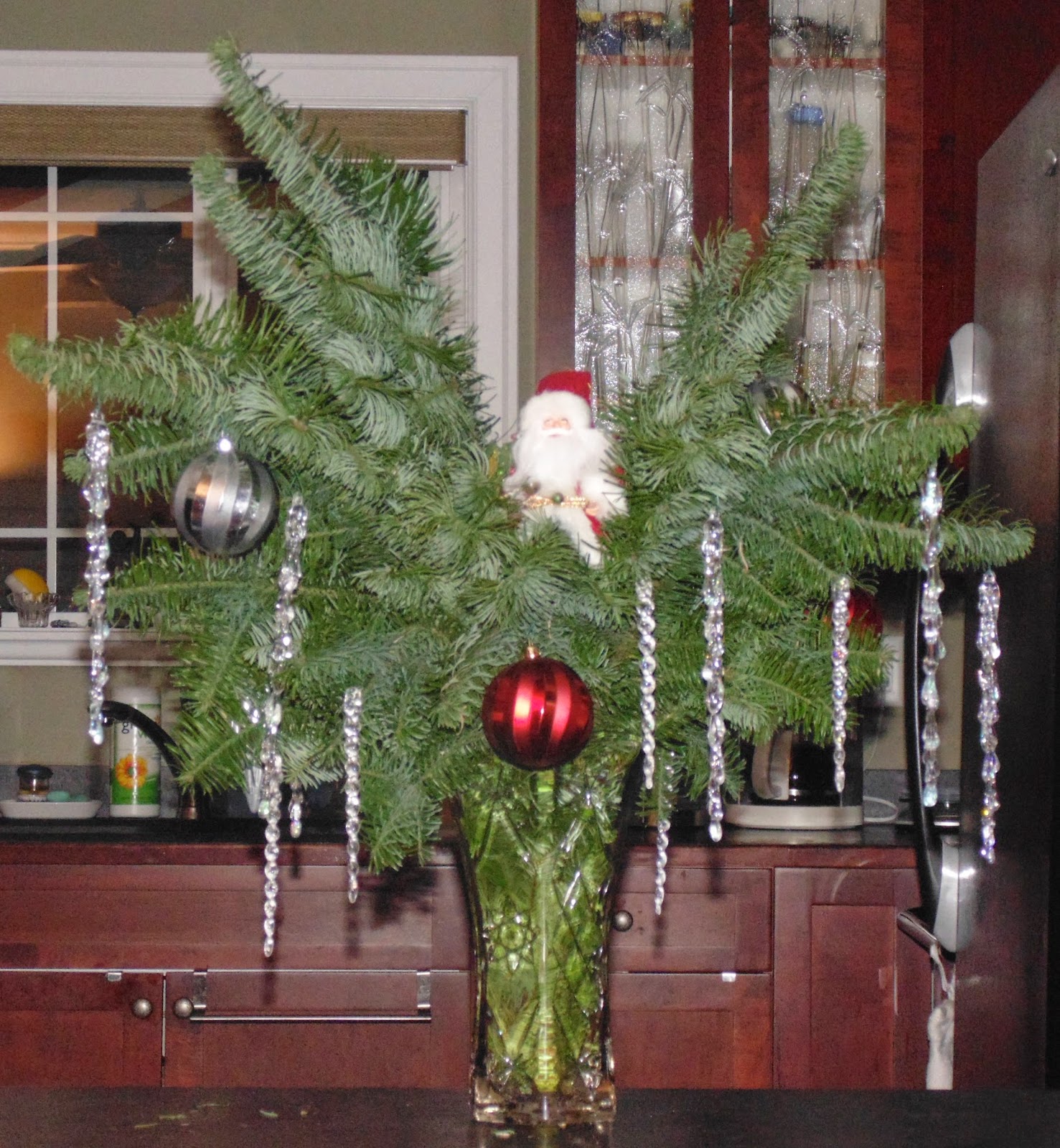 And so we will wrap up the year as we wish you and yours a most wonderful holiday and a fabulous new year.


Above you see some of Saxe-Bearstein's splendid Artillery and Artillerists.  Below you will find images of her famous Infantry (please note the grenadiers -- on your left).  (Also remember to click on images for a larger view).

To view Command and Mounted units of Saxe-Bearstein, click on this link. 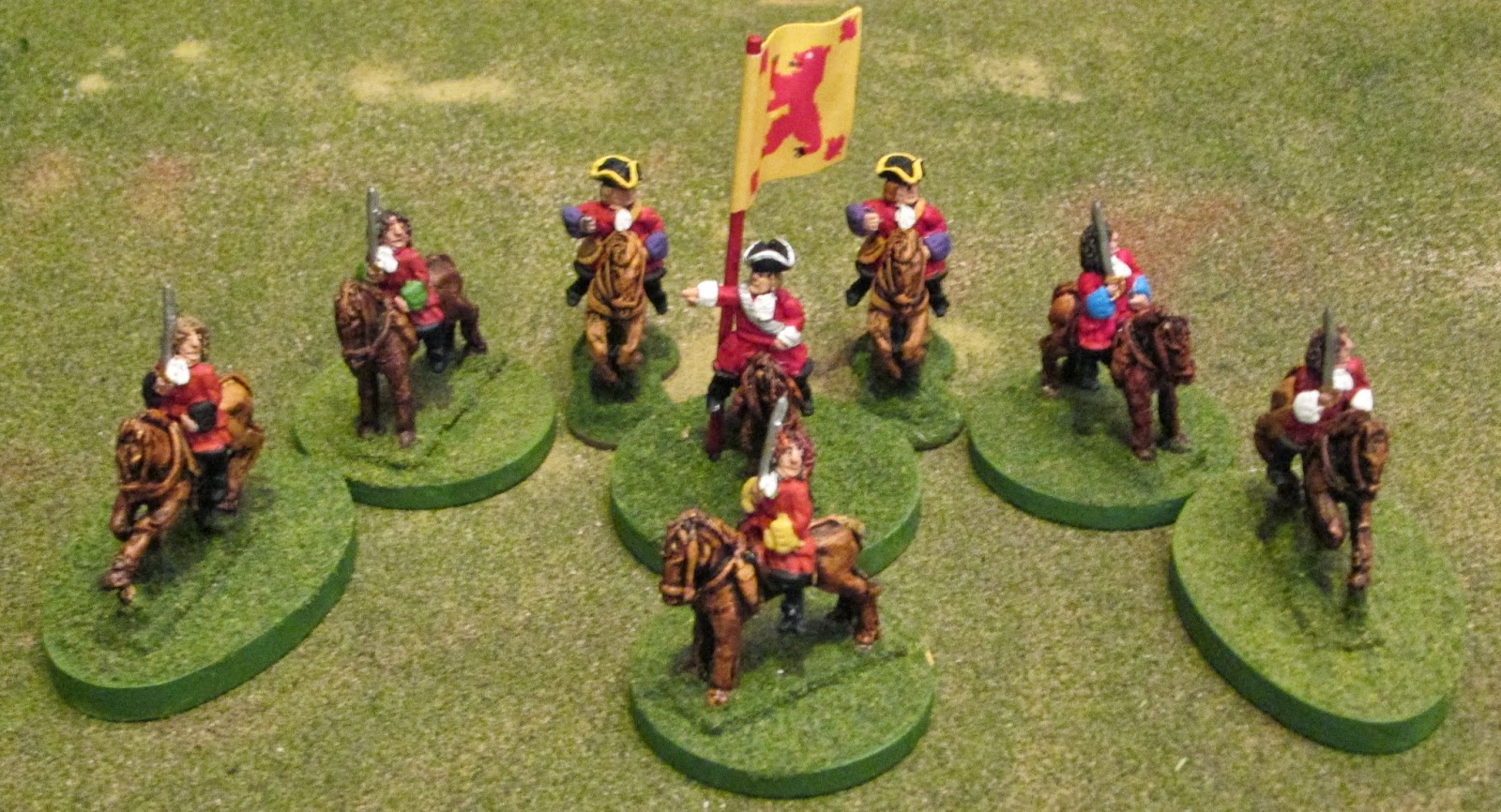 Above you can see a sample of a General, his Aides de Camp and some Brigadiers.  Below you may view Saxe-Bearstein's renowned mounted troops.  (Note -- click on any photo for a larger view).


To view Artillery & Infantry of Saxe-Bearstein click on this link.

A Happy Thanksgiving (Canadian Style) to All

Here in Canada Thanksgiving takes place in early to mid October . . . because it gets colder sooner here in the north and it is basically a harvest festival . . . and this year today is the day.

Having just finished a nice turkey dinner that my dear wife prepared for us, I am feeling quite mellow . . . so please allow me to wish all of you a very thankful time; and remember that you do not have to wait for a "special day" to do so.

My very best wishes to all of you!

I have now finished the last six pike and shot units for my English Civil War Royalist Army.  Pictured below (along with those in my earlier post (clicky)) are what my dozen pike and shot units look like . . . followed by individual photos of the six new regiments (click for larger images).


The new regiments are as follows:

I am also near finishing four units of Commanded Shot . . . but I still have ten units of Cavalry as well as a couple of Dragoon units (both mounted and on foot) as well as all of my Generals and Brigadiers . . . not to mention artillerymen.

So I am far (okay much too far) from being where I want to be with this army . . . but for me the hardest part is now finished because unlike most gamers I find foot far more tedious to paint than mounted troops.  Beside which all I really only need to finish is some of the mounted and a few officers before Murdock and I can try out some ECW rule sets on the table top.

Murdock has just posted a number of photos of his English Civil War forces (click on previous under-lined passage to see them).


Now I must make clear that Murdock himself is not an evil chap . . . he is in fact a jolly fine fellow and a very kind and helpful friend.  His ECW army on the other hand is filled with the sort of fellows who would cancel Christmas . . . indeed I believe that Cromwell did just that . . . certainly not the kind of people one would want in one's home.

I, on the other hand am building a Royalist force (see my last post).  Now I will freely admit that Charles is not my ideal as a king . . . but he IS king . . . and you would certainly rather have the Cavaliers at your local pub than those Roundheads.  Admit it . . . who would you rather have a round or two with, stout fellows or Bible-thumping puritans who would banish "cakes and ale"?

Now I must confess that Murdock did agree to take on this Evil Army as a concession to me since I wished to run the Royalists (as I sure you would too).  He really is a jolly good chap (even if he is serving as a Roundhead).

Please take a look at his blog post (clicky).

Well I have finally finished my first six ECW Royalist units.  Following the photos (click for larger images) I will discuss my reasons for the "unusual" basing and for the "command figure" in front of the units.

So why did I place five figures on the pike stands (placed like a five pip on a d6) and three figures on each shot stand . . . all instead of the usual four on each?

I firmly believe that pikes should be in "close order" and that (with burning matches) matchlock men would be in a looser (although not "open") order for safety's sake.  Others may well disagree, but I think that it looks good.

As for the "command figure" in front of each unit, it does not fight.  It is simply a marker for the unit's current status . . . in front for good order, in back for disordered, and well behind the unit if shaken.  This allows for a "marker" that does not disrupt the look of the battlefield.

Flags (and coat colors) are from the fine Wargames Design website . . . although I have increased the flag size to 45mm square (pikes/flagstaffs are 80mm).  My bases are nominally 2" square . . . but are actually 47mm square so that they will fit into my display cabinet.

Figures are a mix of 28mm Perry, Warlord plastics and some unknown figures I got from another gamer.

Now to finish the rest of the Foot so that I can move on to the cavalry.

While "real life" has been slowing me down, I have still made it to the painting table more than a few times.  Pictured below is the current state of a dozen Pike & Shot units:

All figures were placed on painting sticks and black primed, then "damp brushed" with white and coloured "identifiers" painted on the sticks.

Since then all figures have had at least 5 colours applied (many have more) -- at a minimum every figure has flesh, hair, headgear, coat and breeches painted.

The result is that no two figures are painted the same way . . . but that each unit will look like a unit (albeit perhaps a bit ragged or with differently aged uniforms).

So, what is left to do?  Most of the leatherwork (belts, boots and pouches), most muskets and most metal bits plus a few odds and ends.

Oh yes, I also have four units of Commanded Shot at about the same point in the painting process . . . but all of the mounted still await my brush . . . *sigh*.

Back in 2002 I created a "campaign map" using a program called GameMapr (not sure of spelling).  It uses quasi-Germanic names.  It is free for anyone to use for an Imagi-Nations campaign if they so wish.


I might well use this for an upcoming Solo Campaign War between Saxe-Bearstein and those ever-vile Stagonians . . .  but using on-line rulers to run the larger aspects of the campaign.

What you see above is a stretch of the the Azkyk mountain range which separates a pair of traditional enemies . . . and unfortunately there are numerous passes through the hills that armies might use.

What I was thinking about was allowing each side the following:

The Militia troops are not mobile -- they are also of "poor" morale and only usable to defend their own city.  (I will have four such units that could be used for either side so that is why a maximum of four per city.)

I still have some painting to do (three of the Milita units) and my rules to polish before I can contemplate running this . . . and, of course, the recruiting of my opposing Ruler/Generals.

I just finished assembling some 18 artillery pieces and tomorrow I'll prime them (weather permitting).  They are mostly RSMs -- 8 light guns (3#ers), 8 medium guns (6#ers) and a pair of heavy guns (12#ers -- note that I've already got 4 of these painted up).

Half will be given blue carriages and half red.  They will serve for my Stagonian Wars forces as well as for other periods (with different artillerymen, of course).

Of course this means that besides painting the guns, I will have to paint up a bunch of oxen and horses as well . . . and, of course, artillerymen for a variety of periods.

Despite having another flare-up of my gout, I have managed to finish the last two planned units for my Saxe-Bearstein and vile Stagonian forces . . . a pair of irregular Hussar units (one for each army).

At left is a view of the irregular forces for both Saxe-Bearstein (left of photo) and those vile Stagonians (right of photo, in blues).


Each army also has three 12-man foot skirmisher units, which are mounted individually.  The Saxe-Bearstein unit facing colors are Yellow (pictured), Green and Black; while those of the vile Stagonians are Blue (pictured), Lavender and cream facings:


The Skirmishers have been finished for ages but I'd never posted photos before today.  The Hussars are the only new units . . . and I had to 'play hooky' from painting my ECW units in order to paint them . . . but I needed a break from all of the pike & shot units.