Books for the Holidays! --

Well the "gift giving" has passed and my wife gave me the books I've ordered recently . . . which means that I'm suddenly inundated with good reading material. 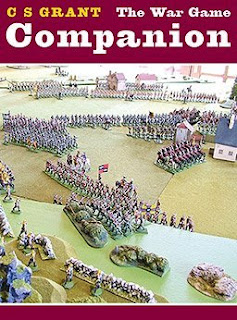 I admit that I am basically rather impossible to buy for . . . at least for someone who knows nothing about historical gaming . . . so my dear wife snags these with my knowledge.

Anyway, I finally am getting a chance to read my copy of "The War Game Companion"; and also my copy of BATTLEGAMES Magazine #15; as well as Grant & Asquith's "Scenarios For All Ages".

In addition I have a copy of "The Campaigns in India During the Severn Years War 1756-1764" by Mike Kirby; and the Osprey Men-at-Arms book "Louis XV's Army (1) Cavalry & Dragoons".

And, since I'm trying to build-up my ECW background, I got copies of "English Civil War Gaming Scenarios (Volumen 1)" by Steven Maggs and "E.C.W. Flags and Colours 1: ENGLISH FOOT" by Peachey & Prince. 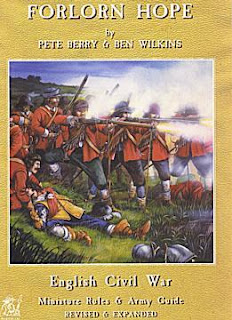 Finally (and most delightfully), Steve Carroll of the UK was kind enough to send me his extra copy of the "Forlorn Hope" ECW rules by Berry & Wilkins. I am continually delighted by the kindness of fellow gamers.

Yes, I've given things to other gamers and even sent them overseas asking nothing in return but that they "pay it forward" . . . that is to help someone else out down the line . . . but it was a complete surprise when Mr. Carroll kindly offered me his spare copy of these rules.

I've wanted to see these since I've read so many people saying that they give the best "period feel" for the English Civil War . . . and yes (even though he didn't ask) I will "pay it forward" by continuing to help others in our hobby. And isn't that what the spirit of this season is all about?

May Your Holidays Be Blessed With Smiles --

Our internet connections help us to inspire each other in our hobby pursuits. But we also develop friendships through our posts. 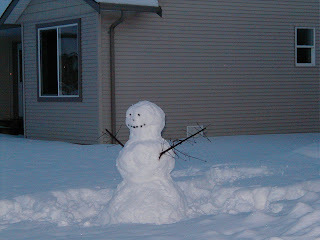 I would like to take this opportunity to let you know how much I appreciate our blogland contact and how impressed I am with the creativity and ingenuity of our hobby community.

May your holidays be blessed with many smiles as we enjoy the closeness of family and friends.

The photo is of the snowman that young Michaela made this afternoon before she and her mother flew back to Alberta. Please note that the smile on Mr. Snowman's face echoes my own as I think of how much my hobby experience has been enriched by my contact with all of you.

Be ye blessed with smiles.

No, not really, Stokes of the "Grand Duchy of Stollen" is actually a very nice fellow (we've had some nice phone conversations).

So why do I say that?

He and Jonathan of the "Principality of Hesse-Engelburg" and the "Landgraviate of Ober-Schweinsberg" are playing out one of Charles Grant's "Table Top Teasers" as a 'play by email' game. 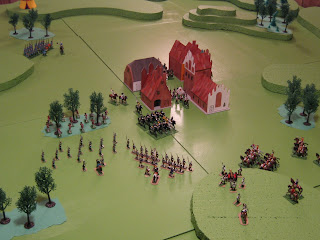 To make matters worse, they are using the venerable "Charge!" rules.

I mean that this is the essence of 'old school' 18th century table top gaming . . . and it is extremely appealing (click on photo to left for larger image).

Yes, I confess it. I want to play games like this on my table. I do. But I don't have the 'big battalions' that are needed.

And I want them.

Of course it takes time to paint them . . . lots of time. And I have lots of "honey do" items on my list . . . including finishing the library (currently full of hundreds of boxes of books and no shelving) before I can do any painting.

So it will be some time before I can play some Charge! games . . . therefor I'm spending my time re-reading "Charge!" and hating Stokes.

---------oo0O0oo---------
To watch the progress of the game Stokes and Jonathan are playing, go to the "Grand Duchy of Stollen" blog and use the archives to go back to November, 2008. Find the first move and then work your way forward. 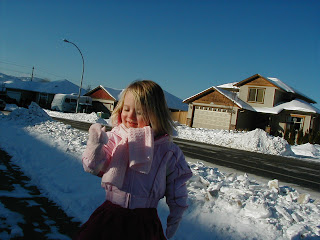 Well, while it is predicted that we will get snow on Christmas Day, it is certain that we will have snow on the ground then . . . in fact enough to make up for those other ten years of no snow.

We currently have my wife's baby sister and her three-year-old daughter, Michaela (pictured at left) as house guests.

They flew in a couple of days ago, planning on driving down-island to visit other relatives and then back up to see us before flying out on Christmas Eve.

However the roads south were (and still are) snow-ways . . . and more snow is forecast virtually every day . . . so we get to enjoy their company for the week.

And in case you don't know it, three-year-olds have a seemingly infinite supply of both energy and curiosity . . . but it is also nice to have her bubbling laughter brightening our home.

Wargaming Interests and (OT) Outside Tree -- 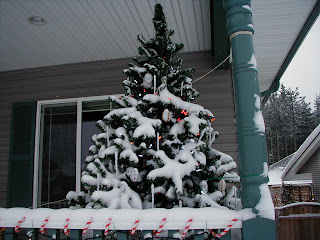 Before I get to my wargaming interests, I've posted a photo of our "outside tree".

As you can see, we've had our first showfall of the season . . . and everything is nice and white.

Well "nice" until we had to go out and shovel off our driveway and the sidewalk. While doing that I kept thinking of what a friend calls snow . . . "damned celestial dandruff".

Anyway, our "outside tree" is an artificial one we got in California about a decade back . . . and the ornaments are plastic . . . but with its red and white lights it looks good fromt he street.

So, I'm sure that you're thinking, "Am I playing the history when I use an Imagi-Nation?"

The Northwest Frontier (okay, I'll admit to reading a lot of Kipling in my youth), the Sudan and to a lesser extent, South Africa. And the Americal "Wild West". 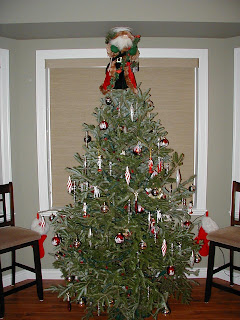 Well today both my bride and I went out looking for a replacement tree.

As I mentioned in my previous post, my lady didn't like the one I had found . . . and I'll admit it, we did find a much nicer tree.

We haven't finished trimming it yet and the tree lights are unplugged for the sake of the photo . . . but here it is. (note: click on photo for larger version).

Note that the sharp-eyed amongst you might find a few nutcracker 'toy soldiers' on the tree.

May your holidays be joyful . . . and your dice roll well. 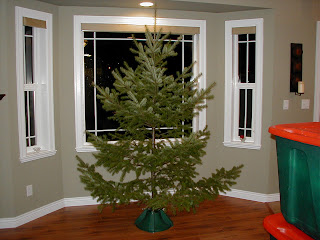 My dear wife and I have been "under the weather" lately. We both have sore backs.

Hers is because her sciatic nerve is really kicking up . . . and I have some more kidney gravel (i.e., very small kidney stones -- like sand) moving through my system.

But today I got sent out to find a tree for the holidays.

Well I really really don't like those thick pre-shaped trees. I'm sorry but to me they are too much like topiary (which I'm quite unfond of) . . . I want a natural tree.

So there I was aching back and all driving around through the rain trying to find a decent tree . . . I found some nice ones of course . . . but they were not only quite pricey, but their trunks were too thick for our tree base.

Then there were those 'jack pine' trees. I understand that they are quite fashionable . . . but they don't look right to me.

Anyway, hurting as I was, I finally found the tree pictured at the top of the column . . . and my darling bride tried to like it. She put lights on it and ornaments . . . and then came to me looking downcast saying, "I'm sorry, I know you like an open tree . . . but we can't even put a quarter of our ornaments on it."

So tomorrow we get to go tree shopping again. Anyone want a nice 'barely used' tree?