I know that I haven't posted much lately . . . but my time has been taken up with play rehearsals. Yes, I will be making my Canadian debut on October 1st in an original play by Vancouver Island playwright Michael Armstrong. 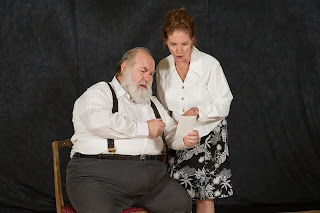 The play is titled "Night of Shooting Stars" and is in the film noir tradition. I play an old retired detective who is recalling a case from the 1950s.

To the left you can see one of the publicity stills taken (and copyrighted) by Terry Penney. I'm the one with the beard . . . and sadly that is its real color.

Anyway I probably won't get to do any gaming until after the show closes . . . but I can still dream a bit, can't I?

As I believe I mentioned some time ago, I have been thinking off-and-on about doing a "War of Spanish Succession" or "Nine Years War" project in 15mm.

Now this is not something that I'll be tackling immediately . . . it is a future project . . . but I've been reading and looking at various rule sets. So far I've not found a set of rules that I'm sure I like.

Too many rule sets are either too complex or use a basing system that I dislike or don't operate at the level I want.

I want battalions and squadrons to be the basic units (not brigades and regiments). I want enough figures in a battalion that it looks to me like something other than skirmishers -- which means two ranks of figures. And most of all I don't want to spend all of my time looking up tables and figuring out a laundry list of modifiers. I want something simple and fun.

So I've been thinking of adapting my "Tricorne Wars" rules to 15mm. I happen to have a lot of Editions Brokaw figures (which are smallish 15s). Four of these (at least for certain poses) will fit on a 20mm square stand.

If I use that for the "volley fire" armies and 25mm square troops for the "platoon fire" armies, the rough frontage differences will not be far off. At a rough 1:30 scale, this would mean most battalions would fall in the 5 to 6 stand (20-24 figure) range . . . some smaller and some larger, but a lot would be about that size.

Now at the same scale, typical squadrons would be 4, 5 or 6 figures in size (representing squadrons of 120, 150 and 180 respectively). Of course this difference will require a few changes in my mechanics, but these sizes should fit historical units.

As the above suggests, my thought for the WSS is to use historical armies as opposed to Imagi-Nations.

Of course, I'm still reading and this project is for some time in the future . . . but at least I've made a mental start on it.

Wow! These were spectacular! I certainly don't agree with a lot of China's policies, but the artistic portion of the Olympic opening ceremonies was easily the finest I have ever seen. The visual charm of it was riveting.

If you haven't seen them yet (we got them live here in Canada), I urge you to watch them.

We all have lives beyond our "toy soldiers" and some of that is now taking time away from my gaming.

I am an actor. No, no one you've ever heard of. I act in local productions (sometimes called "community theatre") . . . and I am currently in rehearsal for an original play by a playwright here on Vancouver Island.

Now, while I'm enjoying this very much, one of the drawbacks is that we rehearse on Sundays . . . which is our usual gaming day. So until the play is over I'm not likely to be fighting on the table top.

Hopefully though I will be able to do a fair amount of reading and painting.