Recently on the "Old School Wargaming" (OSW) group there has been a discussion about "command and control" in various miniature rules. So I decided that it was time to review how I've treated it in my "Tricorne Wars" rules.

First let's take a look at the 'philosophy' behind the rules. My personal preference is for a substantial degree of "fog of war" in table top gaming. To my mind one of the great challenges of command is in the handling of your subordinates.

All too often we gamers expect everyone on the table top to follow the orders of the C-in-C. But historically that was often not the case. The officer "on the scene" needs to react to the situation as he perceives it . . . and often their decisions don't coincide with those in charge.

In "Tricorne Wars" every General and Brigadier has a 'personality' (which also determines his 'inertia' rating), an 'initiative' rating and a 'command radius'. For our "Wars for Arcadian Glory" campaign, we each have four 'Generals' and six 'Brigadiers' -- and the dice determine who the monarch has decided to send us (we don't get to pick either the C-in-C or subordinates).

There are four different 'personality' types (and we each have one General and at least one Brigadier of each type):
The Initiative rating for each officer is determined by rolling 2d3 at officer creation and recording the lower die result as his 'initiative' -- on average 56% will have a "1"; 33% a "2"; and 11% will have the best initiative rating of "3".

Command radius is determined by rolling 3dAv (averaging dice are numbered 2,3,3,4,4,5). The total is the "mounted" radius for all officers . . . but Brigadiers also have a rating for foot command . . . the two lower dAvs. So if the roll gave you a 5,3,3 the brigadier would have a command radius of 11" if commanding mounted troops; but only a 6" radius if commanding an infantry brigade.

So, how do these things work in practice?

First of all, we have a series of available "Orders" which the C-in-C can issue to his various underlings:
Now all 'on table' commands are presumed to be under "Hold" orders to start the battle. Each officer must first overcome his "Inertia" in order to act on his orders (and he tests with a +1 to the target number) in order to 'get started'.

For example, a Steady Brigadier would normally have an Inertia of '2', but with his +1 he needs to roll 3 or less to begin acting upon his new orders. Let's say he rolls a '5' so his command remains with "Hold" orders. On turns after the initial "inertia test" officers get to add their Initiative rating to the target number as well.

For the time being, this Brigadier will act upon these orders . . . although if any unit in his command was outside of his "command radius", it would remain under HOLD orders unless or until he moved to include them.

However . . . once his command gets within 12" of known (non-skirmish) enemy, the Brigadier must test to "Interpret" his orders (by rolling 1d6). And in order to interpret his orders, both the C-in-C's and his Personalities come into play.

If the C-in-C is "Careful", the Brigadier knows that and presumes his orders are overly cautious, so he'll add a +1 to his Interpretive die roll. On the other hand, with an Aggressive commander, the Brigadier will subtract one.

Think about the above for a moment. As a Careful C-in-C, you know that your underlings are going to look to interpret your commands more aggressively -- so your tendency will be to give more cautious orders so that it won't be so bad if they interpret them "up". The reverse is true of an Aggressive commander. Knowing they'll be looking to temper your commands, you'll tend to write more aggressive orders.

Okay, what about Steady and Political?

Well, the Steady commander is what everyone wants . . . but a high or low roll by a subordinate may still cause interpretive problems. The "Political" commander is more fun. This basically represents a favorite of the monarch (or maybe the monarch). His orders may not make a lot of sense. A high or low roll may cause you to revert to "Hold" as you need more clarification.

And, of course, each of the four Personality types has a different "reaction" column depending upon what type of officer they are. Simply put, high and low rolls may get a different Interpretation of the orders given. Here is a link to the table of reactions.

Let's get back to our Brigadier from before. His command has been Advancing toward the hill he's supposed to Defend. They get within 12" of enemy who are also advancing on the hill. At this point the Brigadier must test to 'Interpret' his orders. Let us say that he rolls high enough to interpret them as Attack orders. He will now head for that enemy with alacrity. (It should be noted that, in all likelihood the enemy will also be having to Interpret his orders at this point).

Okay, things aren't too out of control at this point, are they? But the brigade now reaches the hill. And that means that they Orders have changed to Defend . . . or does it? In order for the Orders to change, the Brigadier must overcome his Inertia (and this time he doesn't have that +1 for being on Hold), so he needs to roll a '2' or less to 'get' his new orders. Luckily he rolls that '2'.

However, since he now has a new Order, he must Interpret it. What will he roll? And what will the result be?

I think you can see that this system means that a C-in-C needs not only to have a plan of battle, but to think about what roles to give to which subordinates. Some officers are more likely to respond to changes of orders than others. Some are difficult to deal with; some are loose cannons. Again, here is the link to the table of reactions . . . because who to give what roles to becomes something to think about.

And even with planning there are enough times when officers need to interpret orders that some part of your plan is likely to go amiss . . . but that's what I'm aiming for. That is more "fog of war".

Weird the way some things happen, isn't it? I sat down to re-read "CHARGE!" this evening . . . and on the first page the thought of a new wargame popped into my head.

Well not really 'new' because it is Chess . . . but with a wargaming twist. Instead of automatically capturing a piece, you each roll a polyhedral (many-sided) die:
The loser is eliminated. The winner captures (or retains) the square. In the case of a tie, the defending piece retains the square and the attacker retreats back to where he attacked from.

The King is never 'checkmated', he must be defeated in combat . . . so if he's in 'checkmate', he must still move (even though he'd still be in check) and he must then be attacked (remember your +1).

Okay, we are back online now. And here is a link to an article in a local paper (Comox Valley Record) about what I'm doing with our local theatre company:

Offline for a While --

I may not be able to respond to comments and emails for a while. My wife wants me to turn our wireless router off for a bit . . . so I'm going to do that. However this will mean that we won't have any internet access for a bit. 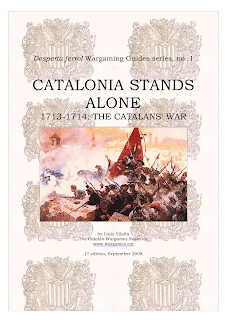 Today marks the release of some exciting new information about the Spanish Theatre of the War of Spanish Succession.

There is a great deal of information in the English language about the northern (Marlburian) theatre of the war . . . but a great deal less about the two southern theatres (Italy and Spain).

Today that has changed as a group called "The Catalan Wargames Resource" has released its first publication, "Catalonia Stands Alone: 1713-1714: The Catalans' War" in .pdf format. Best of all it is Free!

Click on the above title to get to the download page of this 44-page .pdf file. It not only has maps and information about battles, but also has information and illustrations of uniforms and flags for quite a number of units. 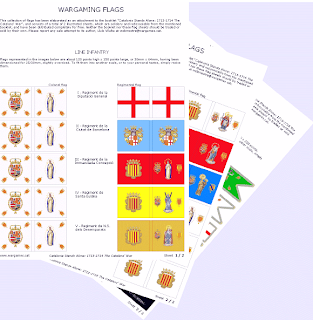 I haven't had a chance to read it yet (it is in English by the way), but I've done a quick scan and I can already see that there is a lot of information that I will use.

The image at the top of the article is of the "cover" of the booklet; and the second (to the left) is of the three pages of flags to print and use that are also included in the download.

Click on the link above to go to the download page for this wonderful information . . . OR . . . go to the group's homepage:

While I believe it is in the Catalan language, they do have links to translations into a number of other languages (click on your appropriate flag).

Let us all salute this group of gamer/historians who have added a wonderful resource for our hobby.