First, I'm alive and getting stronger.  As many of you know I had eight hours of cancer surgery in April and spent 20 days recovering in hospital.  I still have to take it pretty easy . . . and I often find myself taking naps . . . and I run out of breath easily (lots of residual anemia) . . . but I no longer have to use a walker . . . indeed I don't even use a cane in the house (although I do outside).

So I am thankful for my improving health . . . although I'm supposed to start about six months of chemotherapy next month, which will undoubtedly knock the stuffing out of me again.  Still, I'm alive . . . and it isn't all that many decades ago that I wouldn't be.

As for gaming, I've not been up to it since the before my surgery . . . but of course I've thought about it.

Hopefully I'll be able to resume my Colonial "Afristan" Campaign soon.  It was initially interrupted when one of my players had a heart attack, then of course I got sick.   I do need to finish painting some figures for the next couple of battles, but until recently I've been prohibited from lifting anything that weighed more than "a half kettle of water" so I haven't had access to my paints.

I also am looking forward to trying out Ross Macfarlane's "Hearts of Tin" rules with my Saxe-Bearstein and vile Stagonian forces.  One of the attractions of these rules is that Ross uses them for solo play . . . which would be good for me over the coming months since I would be able to play games in small chunks, resting when fatigue catches up with me.

I am also hoping to re-base all of my 18th century units with bases better designed to fit into my gaming cabinet.

Oh, while they haven't arrived yet, one of my birthday presents will be three books from On Military Matters:
Hopefully it won't take too long for them to arrive . . . but I will have a good birthday even without them since I am still here.

As a very young man I read a fair number of books of "fairy tales" which were illustrated with images of "red goblins" . . . so I have never liked the "green goblins" (and orcs, etc.) that Games Workshop advocates. 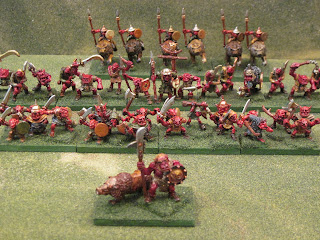 Today, while reading tradgardmastare's "The Duchy of Tradgardland" post wherein he also didn't care for the ubiquitous Games Workshop green, I recalled that I had painted up a bunch of goblins and orcs in red for a "Hordes of the Things" army. 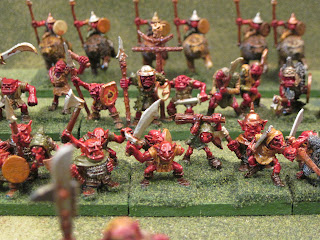 So,  here are a couple of photos to show that goblins and orcs don't have to follow the Games Workshop corporate line.

Paint your goblins and orcs whatever colour you want, Gentlemen.