Don't rush to your history books, he's not in them although he served from before the war until after it.

He wasn't in a "war zone", but he did have a rather adventurous time during the war. For the most part (well, after OCS anyway) he was stationed in Central and South America . . . and this is what he said to me in the 1950s:

"I wouldn't trade my experiences during the war for a million dollars . . . and I wouldn't go through it again for ten million." . . . please note that that was when a million bucks was worth a lot more than it is now.

As an enlisted man he was on his way to Hawaii on a steamship when the attack on Pearl Harbor occurred. The captain turned the ship about and returned to California, saying that the only weapon aboard was a .38 he had in the ship's safe and he wasn't going to sail into an active war zone with just that.

With the war ramping up, my Dad was sent to OCS and came out as a 2nd Lieutenant. He then shipped out to Panama. But being stationed in Panama didn't mean that he stayed there.

Like the bulk of the Signal Corps in Panama, much of his job was to establish and repair communications throughout Central (and northern South) America. I know that at one point he was even sent to the Galapagos Islands . . . and my mother has photos of those big swimming iguanas that they have there. 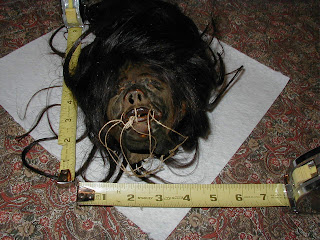 We even have a shrunken head that he got in Ecuador. (click on photo if you need a closer look).

We also have coins and paper money from all over Central/South America.

I don't recall which country it was, but he talked about one of the Central American nations whose currency featured an attractive woman. As the bills went up in value, she shed more and more clothing . . . it was a different time . . . and Dad couldn't afford the larger bills so all I ever saw was a single breast uncovered (note: not nearly as good as those old National Geographics).

Only once did he encounter an "enemy". His unit triangulated the signals of a German agent who was transmitting reports on the shipping passing through the Panama Canal.

It turned out to be an old German fellow who'd long lived in Panama, but who thought that he owed his service to Germany. He was unarmed and offered no resistance . . . indeed Dad said that the fellow was surprised that it had taken them so long to locate him.

In a way Dad's scariest moment came when he was detailed to fly as navigator on aircraft flying out to join a carrier. It took a while for him to convince them that he knew nothing about navigating and had never even been in an airplane.

It turned out that someone had transposed some digits on his MOS. He said that it would have resulted in the death of both him and the pilot (and the loss of the plane) if they'd had to depend upon him to navigate.

He also talked of trekking through jungle that most likely no white man had ever seen when they were sent out in search of a lost aircraft toward a "clearing" search aircraft had spotted . . . but when they got there, there was no crash site, it was just a clearing.

One of the more exciting things he was involved in was blowing up the locks in the Panama Canal. Oh, not for real, but with dummy charges that put out a lot of smoke.

As he told it, a new General had taken command and was not at all satisfied with the security of the Canal Zone . . . however the Colonel who'd been in charge of said security insisted that it was fine.

The same soldiers had been guarding the Zone (or at least the portion the new General was in charge of) for years. They knew what they were doing said the Colonel.

No. They were so bored by their duty that they no longer saw anything.

Anyway the new General called in the Signal Corps and Dad got the job of "mining" the locks with dummy charges that would go "bang!" and put out a lot of smoke. He said some of his men even wore political campaign buttons in lieu of proper identification tags . . . but the guards never noticed.

So, the General, with Security Colonel in tow, reviewed the locks . . . and Dad was given a signal and set off the charges. The Colonel was replaced and on his way stateside that night. After that, the soldiers guarding the Canal were rotated every few months.

Dad said that he got his Captain's bars for establishing a needed telegraph line to somewhere (I don't recall where). It was needed but hadn't been approved. Dad's Colonel gave him the job.

He told Dad that his platoon was on detached duty. He said that certain warehouses would not be guarded at a certain time and that the telegraph line was needed. So Dad had his platoon load everything they'd need up and went to work.

The telegraph line was in operation for six months before it was approved . . . and dad was a captain.

He had much to say about the diseases and the weather (nothing good) . . . the rain wasn't as bad as the humidity. And sadly he also had occasional relapses of some sort of tropical disease he'd contracted . . . one that would lower his temperature. He used to recount how the doctors would be constantly monitoring him and ignoring the guys with high fevers.

All in all, he had a rather eventful career. He never heard an enemy shot fired (although he and his men had times when they had to shoot native fauna). Which reminds me . . . in Central America if you ever eat "chicken" and notice that the "dark meat" is actually light; you aren't eating chicken . . . it's iguana.