*sigh* . . . Not much has been happening here in the Principality of Saxe-Bearstein. Yes, I had a birthday and got some wargaming goodies; but I've been enduring close to two weeks of kidney gravel moving through my system.

Essentially it is sort of like grains of sand slowly working their way out of my body . . . with their sharp little corners scraping against parts of my that don't like to be scraped.

Don't get me wrong, I'd much rather have this gravel than to have actual kidney stones. I've had the gravel's big brothers and I do NOT ever want them again.

What I've got is painful . . . but it is really much more on the uncomfortable and fatiguing side of things . . . and the pain pills that the doctor has given me take care of the worst of it. However they also fog my mind so that I can't really get anything done.

So, what did I get for my birthday? A number of books, mostly ECW and Colonial research material.

I also got some Ral Partha Colonials . . . and I've got some RSM figures somewhere in transit . . . including the Dismounted Dragoons that I've been meaning to get (but forgotten to order) for the last few orders I've received.

I've also been amusing myself reading some of the "Mythic" gaming adventures various places on the web . . . for which I have to "blame" At The "Old Dessauer's" Table. Very interesting stuff . . . I might try writing an adventure using it. 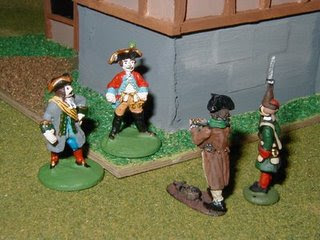 Count Wilhelm Hatzof, the Kingdom of Wittenberg's Ambassador to the Principality of Saxe-Bearstein (pictured at left in the gray coat), and his military attache, Major-General Heinrich von Bose of the Duchy of Fenwick (in the red coat) discuss the latest news with the Cavendarian ambassador, Monsieur Dashiell Jeansonne (in the brown coat), while the Lutelande grenadier, Nils Norberg (green uniform) listens in.

The "Grand Tour" has reached Saxe-Bearstein. Reich Duke Wilhelm and young King Basil have arrived . . . and Furst Bruno von Ursa is providing some very different entertainment than that which has greeted them in other states.

"They have started with a 'pub tour' . . . which means that they are drinking beer in various local taverns." says Monsieur Jeansonne.

"And why not?" responds the general, "Saxe-Bearstein is justly famous for its superior brews. I think that they're even better than those of the Reich Duchy of Beerstein . . . and that is saying a lot."

"Indeed", responds Count Hatzof. "I wonder how the Reich Duke will judge them?"

"And later in their stay they are supposed to go 'fouling' . . . which sounds just too disgusting to even consider." responds Jeansonne.

"Pardon me, Ambassador," interjects the Lutelander, "but I fear that you have misunderstood. They are going 'fowling' . . . that is to say, hunting for ducks and pheasants with double-barreled long guns."

Count Hatzof adds, "Indeed, it is quite the sport. Given that the birds are flying and you have to take into account not only the time that it will take the shot to reach them, but that, as you know, there is a time delay between pulling the trigger and the frizzen charge going off and then igniting the main charge. It is quite the challenge to bring your bird down."

"Then it will be excellent training for the young king," replies Jeansonne. "For there is much unrest in his grandmother Princess Theofilia's Morea."

"Indeed", replies the Count, "It is thought that she sent her grandson on this tour primarily to keep him safe during the troubles her country is currently experiencing."

"Indeed." the others all agree.
Posted by Bluebear Jeff at 2:50 PM 4 comments: