Recently there was a request on the "Old School Wargamers" group for a photo of some of the RSM marching Musketeer pose. 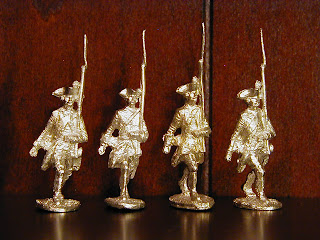 In the photo to the left (from left to right) are RSM95 Musketeers from Austria, France, Hanover and Prussia.

Hopefully this will help distinguish a few of the differences from nation to nation.

These elegant figures can be obtained from the Dayton Painting Consortium at truly excellent prices. 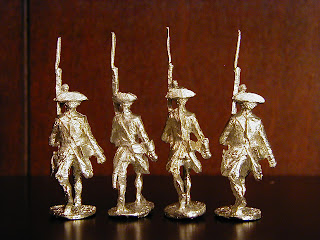 The second photo shows the same figures from the back. They are in the same order -- Austria on the left, then France, Hanover and Prussia on the right side as you view it.

Well, we got the carpet cleaned since it was in a "distressed state" from the previous owner's young children. The floor certainly looks a lot better now -- no more huge stains. 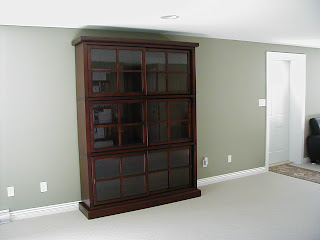 However, in order to do that I had to take down the banquet tables and move them and a lot of other things out of the room.

Guess what? I'm not twenty-something anymore (and haven't been for a long, long time . . . *sigh*) so my back is very much complaining to me . . . telling me it is stiff and sore.

Anyway, with the carpet cleaned we could take delivery on my new Display Case. So here is a picture of it. It is on the wall opposite the bookcases . . . and when my back stops complaining, I'll see about getting the tables back between the two . . . . . . And, no, I still haven't decided quite what I'm going to do for a table . . . but your comments are certainly helping me. Thank you all, I do appreciate your comments and observations.

The final picture is one of the "bar 'fridge" that I have full of nice cold drinks for thirsty gamers.

Thoughts on a Game Table --

I'll have a wonderful space for gaming . . . so the question becomes "what size gaming tabledo I want?"

I can barely reach past center on a 5' wide table . . . but my belly then has a tendency to drag figures and terrain on the table edge off onto the floor (which is NOT a good thing). I also have a troublesome back so I wanted a taller table.

I do have (as the pictures in the last post attest) two 8' long banquet tables; each of which is 30" wide. This presents me with a 5'x8' table with some rounded corners.

One thought that I've had is, since I was planning on having some side tables for troops, that a pair of 5' long banquet tables would give me the option of having a 5' wide table either 8', 10 1/2' or 13' long . . . and sometimes a big table like that would be nice.

But what about "smaller" games?

One thought that I've had is to use the two long banquet tables as a "base" for a 4'x8' sheet of plywood table raised about 7" above the banquet tables. I'd have supports at the four corners and then interior supports running lengthwise (and across) about 8" in from the plywood edge.

Why this inset? So that, along with one 6" on either side, players would have a "ledge" below table height where they could have their rulebooks, drinks (safely under cover) and containers for dice so that none of these would need to be on the gaming surface.

I would also have some brackets on the edges of the plywood so that a protective raised edge would help keep figures and terrain safely on the table. These edges could also be lifted out so that thin boards with a painted background could be used for photographs.

So I have two thoughts . . . and really, they could be combined. I have some 2'x2' terrain boards -- which would be great for the 4'x8' plywood top, but which wouldn't fit on the banquet tables. But the local fabric store that my wife frequents sells lots of material that's 60" (five feet) wide . . . thus a good cover for the banquet tables.

I like the idea of the flexibility of both, but what do I do with the plywood top and frame when I want to use the banquet tables . . . we are on what is known as the "Wet Coast" of Canada . . . which means that we do get a lot of rain -- taking it outside isn't really an option.