So I dug out a number of rule sets that covered the period . . . and was rather appalled at the length of most of them.  Does a rule book really NEED to be several score pages long?

Which got me to thinking about what really needs to be in a set of rules . . . and, off the top of my head, this is what came to mind:
So that's six pretty basic areas . . . and it while some require a bit of expansion, they shouldn't result in the thick (unused) rulebooks that I see on my bookshelf.

I suspect that if I do ever get around to painting and playing with these figures that I might just have to write my own short simple rules.

I don't want to be negative about this.  But there are a great many very fine blogs out there that I don't read . . . because of their subject matter OR format.

First, probably the three most gamed "periods" in historical gaming are Napoleonics, WWII and "Ancients".  and for whatever reasons, I've never been drawn to the first two (I am to far too many periods as it is) and I've had my fill of "Ancients" having gamed them almost exclusively for about 15 years.

So I tend to ignore almost all blog posts on those subjects . . . although I do admit to enjoying the pretty pictures of "Ancient" battles and troops.

Next, as an older gamer with poor eyes I find that a number of blogs are just too difficult to read with any comfort.  These problems fall into a few categories:
I should point out that there ARE a great many blogs that I read and enjoy that do not suffer from the above problems . . . and hopefully a few that will correct some of the above issues.

Finally, I should mention that I enjoy the non-gaming aspects of many blogs . . . I like learning about the gamers' real lives as well as their painting, plans and table top games . . . we are all people with "real lives" as well as our gaming interests . . . and learning more about each other is not a bad thing at all.

Anyway, presuming that the world doesn't end today (ala Mayans), I hope that you all enjoy a wonderful Christmas.

I usually post a photo of our Christmas Tree about this time of year.  Usually it is an 8' Fraser Fir . . . but thanks to my medical woes I simply didn't come close to having the strength to deal with one this year. 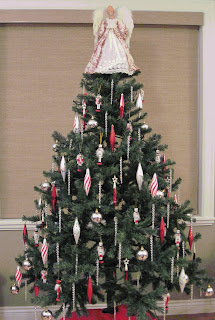 Instead we put up a 6' 15-year-old artificial tree that comes in three sections . . . (we usually have this on our outside porch facing the street . . . but we've had to forgo outside decorations this year).

It isn't all that hard to set up, but with the chemo fatigue it took me a few hours . . . and my wife had to do most of the decorating.  And, if you look closely you will see a number of nutcracker soldiers hanging on the tree.

It's a lot smaller than our usual Fraser Fir . . . and doesn't fill the house with that wonderful "Christmas Tree" smell . . . but we like it anyway. 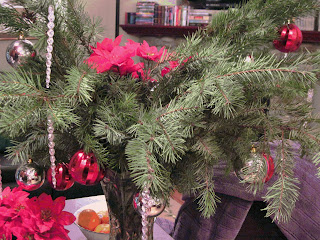 As for the scent, we bought some Douglas Fir branches, which my darling lady wife arranged with ornaments so that we do get to smell the holidays after all.

I hope that you and your loved ones enjoy the warmth and joy of this Holiday Season as we will.

Alpia won the Battle of the Crossroads and now, with reinforcements, is thrusting into Stagonia with the intention of making it through the Bellevue Hills into Stagonia's rich wine country.

General Murdeau, also reinforced but with a somewhat smaller force is trying to prevent this.

So far we've had a number of simple "march moves" and now three "Deck Moves" (where I use the Action Deck described in Clarence Harrison's "Victory Without Quarter" rules which we are using for the 16th century, not the mid-17th).

The Bellevue Hill passes are well to the right of this line of trees but Stagonia seems to have chosen to fight a delaying action here.

The Alpian forces are attacking from the West (left on the photo) in a pair of columns.

For much more, I urge you to visit "The Alpian Wars" blog . . . we seem to be getting some moves in most every day now.

Well I started a new cycle of chemotherapy today (Wednesday) and it is really knocking me for a loop . . . so it is a very good thing that I have a battle that I can fight at my own pace.

Both Ross and Murdock had already sent me their Orders of March some days ago . . . the holdup has been my getting the terrain set up . . . but it is now finished.

The basic scenario is the attempt by the Duchy of Stagonia (which lost the battle of the Crossroads) to attempt to prevent the army of the Duchy of Alpia from forcing their way through the Bellevue Hills into the rich wine valleys of Stagonia's southern holdings.

I've posted the "Opening Moves" for this battle on my "The Alpian Wars" blog.  It presents General Murdeau with a decision . . . He doesn't know the strength of the Alpian columns (there appear to be two) but he suspects that they (in total) will outnumber his forces (even though they've been reinforced since the Crossroads battle).

He has a number of options (as described on the blog link above . . . what would you do in his place?

Well we've wrapped up the first battle of "The Alpian Wars" mini-campaign (go here to read the ending) . . . and so it is now time for all of us to take a bit of a break and re-read the rules and see what wasn't done correctly (there is always something, isn't there?).

Taking a break and asking my generals what they didn't think was right is a healthy thing . . . especially with rules as short as Clarence Harrison's "Victory Without Quarter" rules.

One thing that I decided "on the fly" had to do with Swordsmen (ECW equivalent would be Clubmen).  In general, VWQ prohibits foot units from charging "steady" foot . . . but since Swordsmen don't have any missile weapons, being solely melee troops, I decided that (like cavalry) they could charge steady foot if they made a successful Morale Check (like cavalry).  Both of my generals like this change.

Well actually it isn't a "change" since the matter wasn't covered in the VWQ rules.  In fact the author freely admits that not all circumstances are covered . . . and that players  should make whatever changes seemed appropriate.

So now, between battles it is a good time to think about these things.

The Joy of Playing Again

As many of you know, this has been a very bad year for me health-wise.  What  with illness, the diagnosis of cancer, radiation, surgery, long hospital stay and now months of chemotherapy there hasn't been any gaming.

In fact I checked and it is over 14 months since I had a chance to put figures on the tabletop . . . so even playing a solo game brings me much pleasure.

Now, while the chemo leaves me exhausted (and seriously reduces my immune system) I remain unable to play any face-to-face games . . . BUT I am able to play a solo game thanks to Ross and Murdock for issuing orders to their armies via email.

I am using Clarence Harrison's "Victory Without Quarter" rules . . . although out of period.  They were written for the English Civil War but I've got a couple of 16th century Pike & Shot armies that are properly based for it and so I'm using the rules anyway.

"Victory Without Quarter" is "card driven" and thus they are quite unpredictable in terms of who can do what and when . . . which makes it great fun for me.  I never know what the next card will bring; and that provides suspense.

The action has see-sawed back and forth with one side having the advantage, then the other.  Right now either could easily still win . . . which makes it very interesting and provides a very big "bright spot" in my day.

The current battle is intended to be the first in a series of five-battle mini-campaign . . . so losses from this fight will have consequences later on.  I don't know if my current on-line generals will continue, but if not I'm sure that someone will step into their shoes.  It is great having someone else make the "command decisions" (some of which have surprised me) . . . I do love not knowing what will happen next on the table top.

If you care to follow the action, check out my "The Alpian Wars" blog.