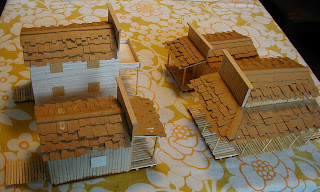 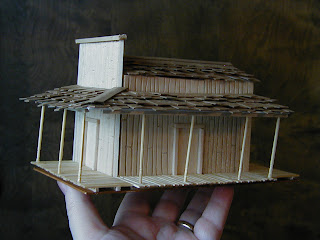 Sorry I haven't posted sooner . . . I've been down with kidney "gravel" again . . . today is the first day in a while that I've felt like I'm half-human again.

Anyway I'm sad to say that my plans for April 6th have changed. A Net friend from back in eastern Canada had been planning to fly out to Vancouver Island and come up the coast for a game. Unfortunately "real life" intervened and he's had to postpone the trip.

What I HAD planned on doing was a re-fight of the Grant's "Mollwitz" battle from "The War Game". I'd use my "Tricorne Wars" rules of course (and smaller units than the Grant's did). But since Ross won't be here, I've put that on hold too.

What I'm currently thinking about is trying a playtest of Clarence Harrison's "Victory Without Quarter" rules for the English Civil War. They read like they would be a lot of fun.

Of course I don't have any ECW figures . . . but in one of my boxes somewhere I have a bunch of Renaissance figures that won't be too horribly out of period . . . well, okay, England didn't have any landsnects but at least they are pike and shot. The cavalry is a little farther afield, but perhaps a mix of my GNW figures and the Renaissance knights will work out.

I really don't know much about the ECW period. I've never gamed it, but Clarence's photos and rules make it sound quite appealing.

I've started my research with what little I have in my library. That didn't take long . . . hmmm, it looks like I'll have to order some books from "On Military Matters" or Amazon.ca . . . and, of course, I'm also searching the Net

And the best "background" site I've found so far is "British Civil Wars, Commonwealth adn Protectorate, 1638-60". Sure, all of you who grew up in the UK know all of this . . . but I'm a product of the US educational system . . . which means that the rest of the world was sadly more-or-less ignored.

Anyway the ECW sounds like it could be a very interesting project . . . for research, certainly . . . and for the table top . . . well I'll have to see about that.

As I mentioned in my previous two posts (which listed the Saxe-Bearstein Dragoons and Heavy Horse), I'm currently using some of my Great Northern War figures (made by Blood Axe Miniatures -- and not currently available) as "stand-in" troops for Saxe-Bearstein.

Pictured below are eleven battalions -- one Guard and ten Line units. As always, click on a photo to see it full size.

"The Bears" -- Saxe-Bearstein's Guard Battalion . . . rated as "Guard", they are larger than the typical battalion; and they are distinguished by their "golden coats":

So there you have it -- the Saxe-Bearstein "line infantry". I still have to take photos of my "irregulars" and skirmishers, my artillery and general staff . . . but these photos should hold you for now.

I expect that I will soon be revealing my next table top project -- but for now this will have to keep you satisfied for a bit. 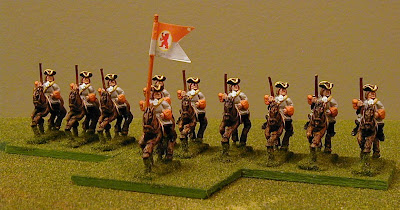 As I believe I have mentioned before, I am currently using some "substitute troops" for my Saxe-Bearsteins. These are all GNW-era figures that I've re-worked into something to use on the table top. 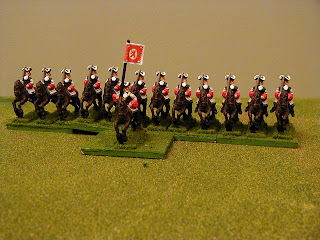 Today we will be seeing my "Heavy Horse" regiments . . . i.e., the "true" cavalry (not Dragoons). Saxe-Bearstein's army contains four regiments of heavy horse. Two are Cuirassiers (von Kodiak Kuirassiers and von Comocks Kuirassiers): and two are Ritters, who eschew both the Cuirass and the pistol, choosing instead to charge at a full gallop with cold steel.

The von Kodiak Kuirassiers are an elite unit. The senior cavalry regiment in the army, their red banner is feared by the Furst's foes.

Pictured above, they are renowned for their grim faces and fine pistol work. 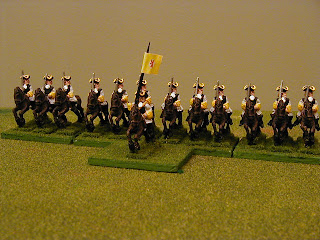 For a better view of any of these regiments, "click" on the photo to see a larger photo.

Saxe-Bearstein's other Cuirassier regiment is the von Comocks Kuirassiers. This veteran unit has as its facing color, honey yellow.

Do not however make the mistake of thinking them any less fierce than the von Kodiaks. As they say, they're number two . . . so they try harder.

Both of the Kuirassier regiments feel that they are the cream of the Principality's cavalry. They consider the two "Ritter" or "Galloper" regiments to be their social inferiors. 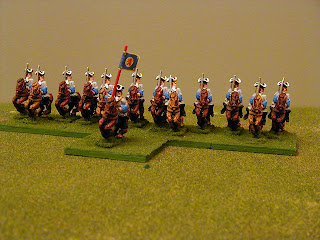 The proud von Roggenbier Ritters would definitely dispute that.

Charging in at a gallop without slowing down to fire pistols has earned these ritters an Elite status.

They claim that their blue facing color indicates the "blue blood" that courses fiercely through their viens.

They urge you to "click" on their photo in order to see what true cavalry look like.

Indeed, the battlefield success of the von Roggenbier Ritters has caused the Furst to raise a second unit of gallopers. 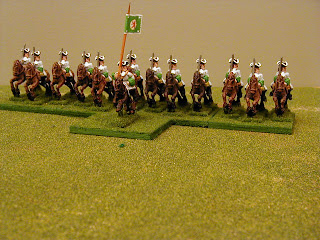 While they still have a "raw" rating, the von Eigerbrau Ritters are eager to face the foe. Their "practice dummies" are dressed in Stagonian colors.

They say that while their green facing color may make people think that they are a "green" unit, they will soon find that they will be "green" with envy as the von Eigerbrau Ritters demonstrate their true worth on the field of Mars.

My next post will concentrate on Saxe-Bearstein's Dragoon regiments.