I'm undergoing another gout attack so I'm zonked on pain killers right now . . . so maybe I'm overlooking something obvious but I seem to be unable to access my Kingdom of Stagonia blog.  It was created using a different email account and Google (which absorbed Blogger) won't let me use that email address.

Therefor I will give you a thumbnail view of the current state of their army prior to "The Stagonian Wars".  Here is a glimpse into my figure cabinet at the main body of the Stagonian forces: 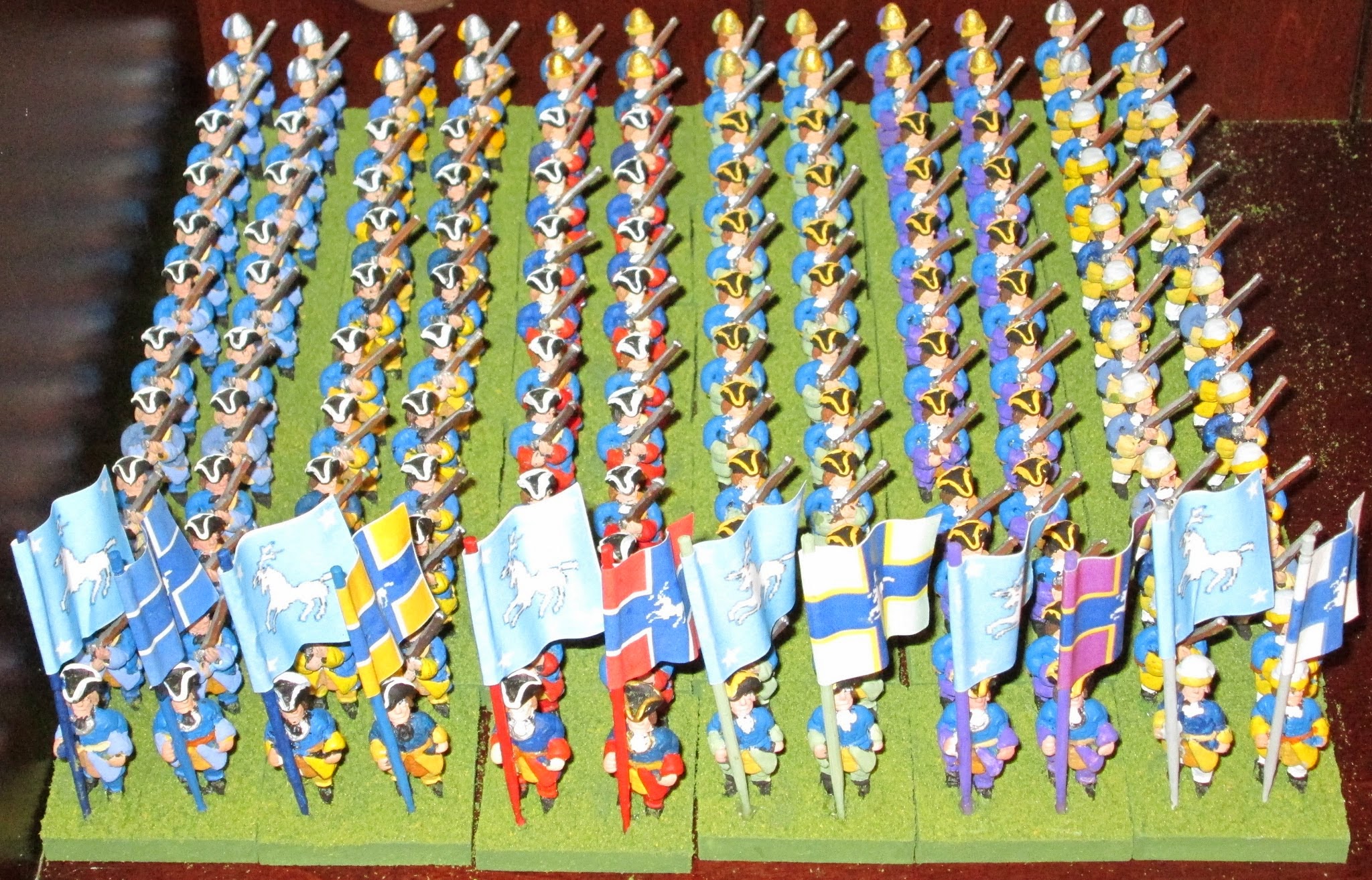 The sharp-eyed among you will notice that there are two fewer foot units than in the forces of the Principality of Saxe-Bearstein.

This is because those two are still in the process of being painted.  Their facing colors will be black and orange by the way.

In addition the army has two units of irregular foot and three of skirmishers . . . all of which are fully painted and based.

To the left is a glimpse of the Stagonian Horse and Dragoon regiments.

As with their opponents they will have a pair of Hussars as well (one of which is painted and one which is not).

And, of course, there are officers and artillery . . . all ready for the table top.

Again all of the figures in the Stagonian army are Blood Axe Miniatures . . . sculpted by Lance Runolfsson and available from Historifigs. 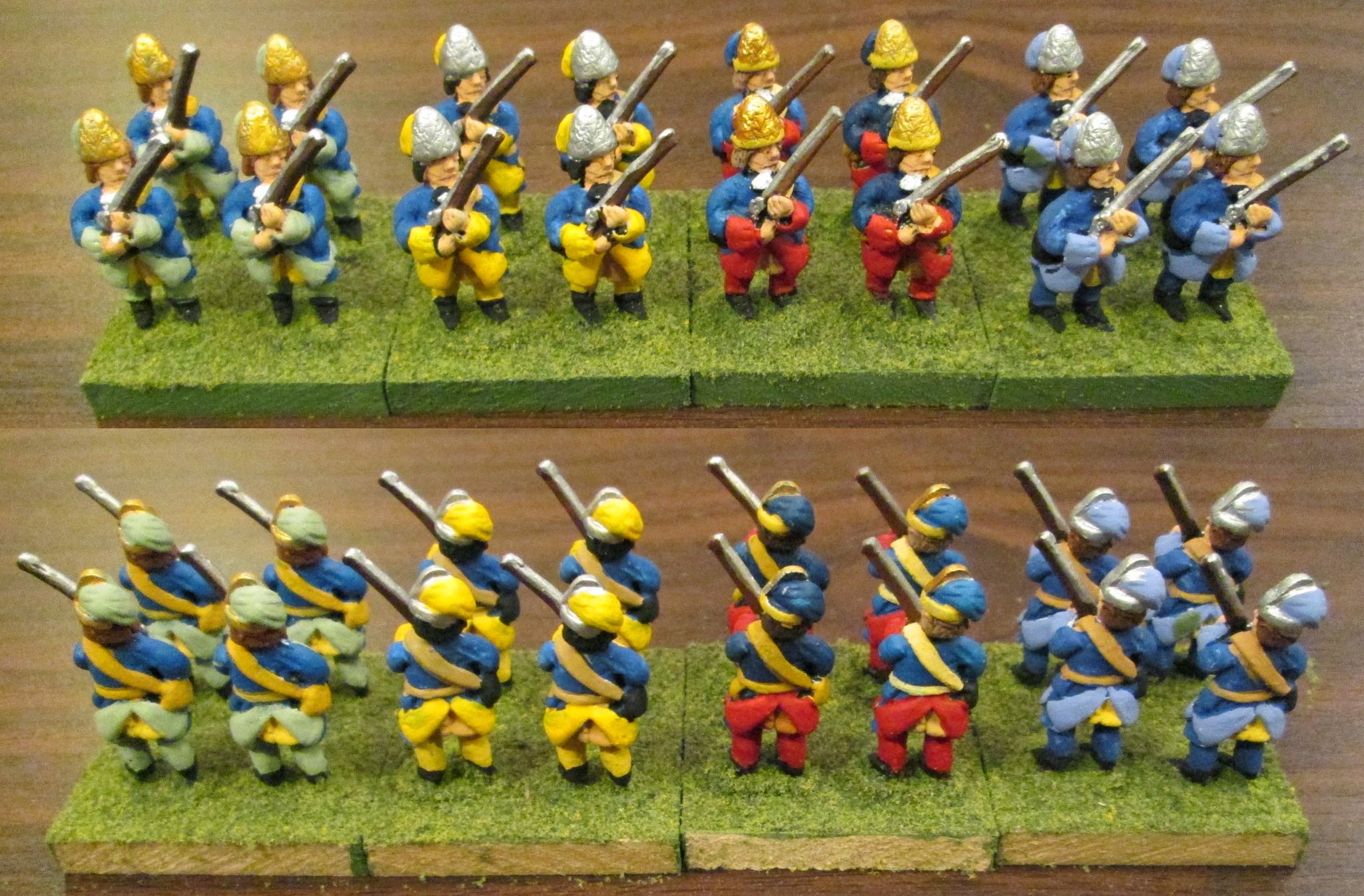 You might well notice that the grenadier hats are also quite different.

You can compare them with the WSS (non-bearskin) versions from my last post.

Actually I should clarify that the irregular units for both armies are mostly drawn from the Blood Axe GNW forces of Russia and Poland. 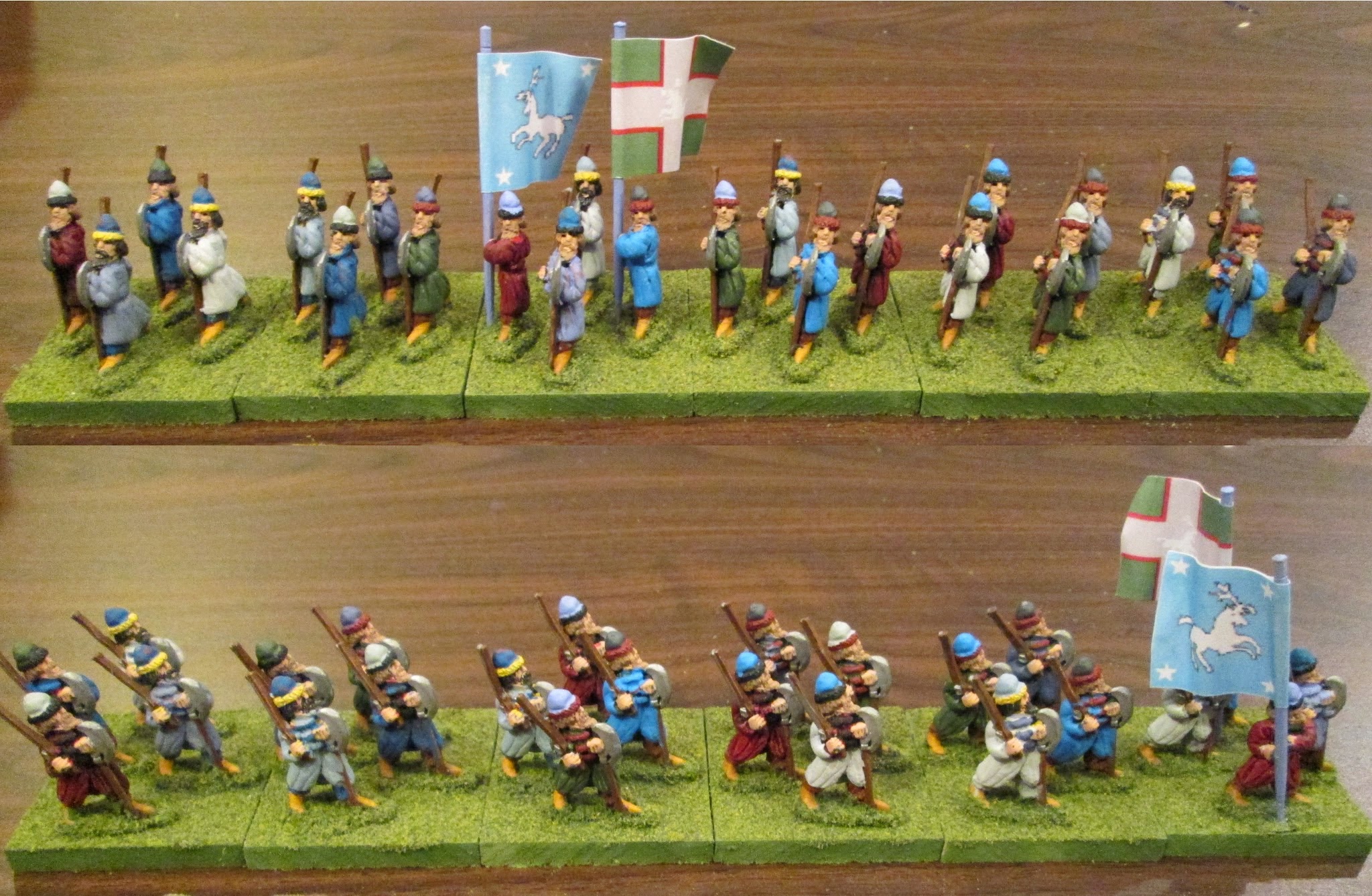 Again the irregular companies (i.e., stands) are based in a loose diamond shape instead of the more traditional two by two companies of the regular line troops.

Above you can see some in both line and column formations . . . and again they are based on the same size bases  as the mounted troops (around 50mm square) instead of the 40mm square basing of the regulars.

In my post on re-flagging my Saxe-Bearstein army I mentioned Grenadiers and Irregulars.  Today I'll provide a few photos to give some idea as to what they look like. 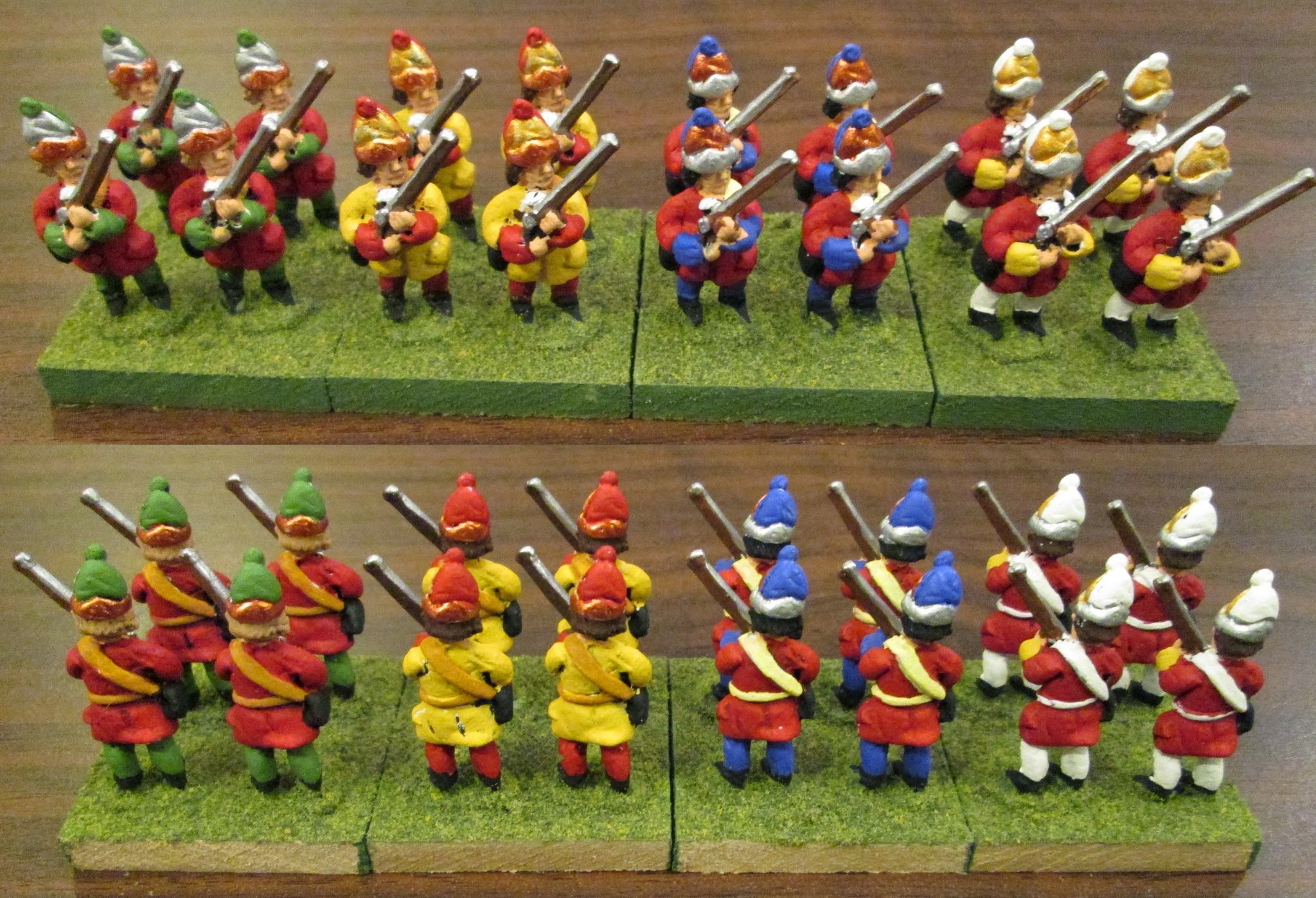 Here is an example of what some of my "converged grenadiers" might look like (both from the front and rear).

Oh, and if you are curious about the yellow-coated figures, they are from my "Pioneer" battalion.

I should point out, by the way, that these photos were taken with a brand new (for me) digital camera (since my old one had given up the ghost, I bought it yesterday).

It isn't fancy (under $80 Canadian at Staples), but I'm pleased with the value for money.  It is a Canon Powershot A1400.

As for the different basing of my Irregular units, here is an idea as to what they look like in both line and column:

By the way, for those who might be curious about the figures, the entire Saxe-Bearstein and Stagonian armies are all 25mm Blood Axe figures, sculpted by Lance Runolfsson and currently available from Historifigs (although I don't think they are all listed on their website yet).

Like many others before me I decided to "re-flag" my 18th Century Saxe-Bearstein Infantry.  Why?  Because larger-than-historical flags just look better on the table top.

What you see above is eight 24-figure single-battalion regiments.  All are based on four-figure 40mm square bases.  Generally these regiments will operate as 20-figure units since their stands of grenadiers (rear row) will be converged into separate units within their brigades.

Not pictured are also a pair of "irregulars" . . . also in six-stand 24-figure units.  However they are based differently and have no grenadiers.  The irregulars are based (as are mounted troops) on 50mm square bases . . . (okay I use 47mm square bases instead so that they'll fit in my display cabinet).

Instead of being based in the two rows of two like the regulars, the irregs are in a "diamond" pattern of 1-2-1 so that even in line they have an irregular look.

As I mentioned, mounted troops are based two to a base on the same size bases as the irregs:

Above you see four 12-figure units of Horse and four of Dragoons . . . I haven't yet decided whether or not to re-flag them.

Also not pictured are a couple of Hussar Regiments; and three 12-figure units of foot skirmishers which are mounted on pennies.  In addition  have a generous selection of Generals, Brigadiers and Aides-de-Camp . . . as well as Artillery, of course.