(About a week and a half ago I re-posted "A Simple Campaign Format" from a couple of years ago. Today I'm re-posting a "companion post" about terrain selection. This is intended to work in conjunction with the Campaign Format if you don't have your own terrain ideas. I hope that you find it useful.) 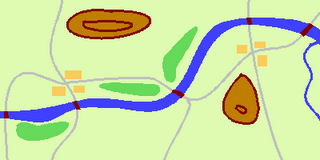 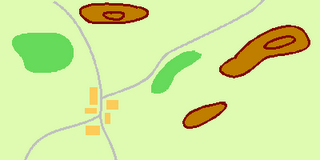 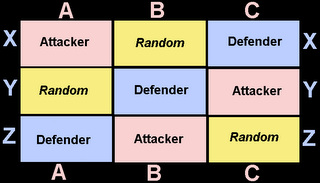 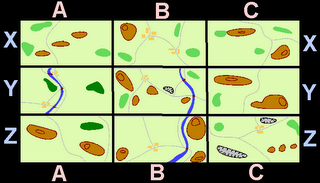 Late friday night . . . well actually about 3 am saturday morning we heard the sounds of a vehicle revving its engine, what sounded like a collision and the squeal of tires. My wife looked out of our bedroom window and saw a vehicle exiting the cul-de-sac behind us.

I went to our front door to see if they were headed down the street. When I opened our front door I saw that the 12' flowering pear tree on our front lawn had been knocked over and branches were everywhere.

I told my bride to phone the police . . . and as I stepped out onto our driveway I could see something lying there besides a lot of leaves . . . turned out that it was the license plate of the truck that did the damage . . . (yes, occassionally there is some justice).

As more of our neighbors came out, we realized that the truck had gone down the block driving over peoples' lawns and smashing down all of the trees and street signs that they could find.

One neighbor had seen them drive down a road that had no other way out . . . so when the police showed up (four cars of them), they had a good idea of where to look.

Bottom line was that they ended up in jail and we saw the truck get towed away . . . and so much for getting sleep that night.

==========================
As I write this, I've just returned from three hours in the Emergency Room of our local Hospital. My wife has not been feeling well since the above incident and her symptoms (including chest pains) said that she needed to be seen by a doctor.

Well it isn't her heart . . . that's the good news . . . but they'll need to run some more tests this week to determine what it is. At least she's back at home now and feeling a bit better.

All-in-all this has not been our best weekend stresswise.

A Simple Campaign Format --
(This is a re-post of my October 26, 2006 post. I have re-posted unchanged it as part of the discussion begun on Stokes' Grand Duchy of Stollen blog about campaigns.)
-- Jeff
=================================
Here is a simple format for a two-person campaign that requires little bookkeeping. It is particularly designed to encourage the building of new units.

Featured above is the "campaign map". The two armies (blue and red here) first meet in the white circular area.

This should be an even battle with similar forces . . . for the 18th century, this might be something like four battalions of Infantry, one regiment of Cuirassiers, one regiment of Dragoons and one Medium Artillery Piece each, with comparable (mainly mid-range) morale.

All troops "lost" in each battle are diced for at battle's end. Dice by "stands" (or even individual figures, if that's how they're based) rather than by whole units.

Note that, even if a unit is completely destoryed, it still gets to dice for each stand to recover. If such a unit fails ALL of its rolls and is completely "wiped out", it is considered to be lost for the remainder of this campaign.

For subsequent battles, the loser will get reinforced by one new unit (although losses will remain from previous battle or battles). The exception to this is if you are forced back to your own "Area B", where you have your choice of either a new unit OR bringing all of your current units up to full strength instead.

Any winner of two consecutive battles may also be re-inforced with a new unit OR may choose instead to bring his current units up to full strength.

If you are pushed back to your "Area C", you get to both get a new unit AND to bring your current surviving units up to full strength.

If pushed back to your Capitol, you get to add one guard-class unit and a heavy gun -- however, you've exhausted your reserves so you don't get to bring any "wounded units" back to full strength.

So, there you have it . . . a simple campaign format that encourages unit building. (By the way, there should be a prior agreement as to the morale grade of new units -- I would suggest either veterans or green units depending upon your preferences).