As you can see from the photo, I've got the "Game Room" end of my Game Room space cleared of boxes.

Now, of course, we have to get the carpet cleaned (it really needs it). Then I can get my Display Case delivered. As you can probably guess, it goes against the blank wall opposite the bookshelving.

The tables in the center of the room for a 5' x 8' surface. And the item in the upper left corner is a "bar refrigerator" for drinks.

To the left, this side of the telephone table, there's an alcove that leads to a bathroom (as well as the guest room and our library). 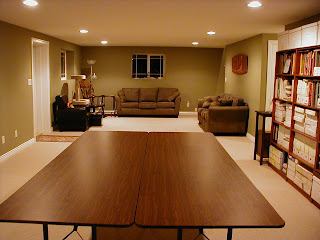 The second photo looks the other way, back over the tables to the "Social" end of the room. That's where (among other things) the role-playing games will be held. And between the two is where I can set up my poker table.

So I am making some progress towards actually having a game room for miniatures (and other gaming).

Well, what can I say, my wife insisted that I buy it. Anyway, this weekend I put a deposit down on a lovely mahogany display case for my figures. It is about 83" tall by 65" long and 16" deep. There are three sliding glass "levels", each with two shelves. It is gorgeous!

Once I can get my "basement" game room cleared out, we will get a carpet cleaner in to steam clean the carpets (they could really use it) and then I'll get the cabinet paid off and delivered. Then I'll have the "big problem".

The problem of deciding which armies get the better "eye candy" placement on the shelves . . . but you can rest assured that there will be tricornes placed on the best shelves. I'm excited!


Sorry for the lack of posts the past two weeks. As you may know, I recently changed my computer's operating system from Windows XP to PCLinuxOS.

Well, while the two "main programs" that we use (browser and email) are the same, EVERYTHING ELSE is a different program. Two in particular are causing me headaches.

The first is the built-in FTP program -- which would allow me to update my website -- it doesn't have anything in its "Help" files . . . and I haven't figured out how to configure it yet.

The other program is the built-in graphics program. I had been using Paint Shop Pro 6 (quite an old program version); but this new program "thinks" differently. Yes, I know that the program doesn't really think . . . but the logic behind it is quite different. It is obviously much more sophisticated, but I have not yet figured out how to make it do what I want it to do.

Finally, of course, our friend Stu, who helped us install this new operating system, is on vacation in the U.K. through the end of the month . . . *sigh*.

The Furst is Furious! --

His joy at the report of the successful relief of the city of Stinz (villainously occupied by the Duchy of the North) turned to fury as he learned the details of the battle.

His son, Brigadier Prinz Gunther von Ursa led four different cavalry charges into close combat! He narrowly escaped death on one charge (and will bear the scars to prove it), yet then took control of yet another unit (the totally untested Hopfenperle Hussars) and led the final decisive charge that prevented necessary Nordic supplies from reaching Stinz -- thus saving the city. 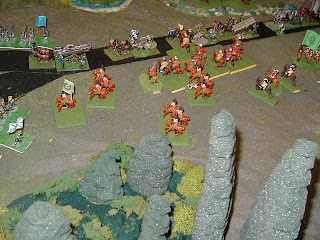 While this did force the Nordic forces to sue for terms (thus regaining the city for Saxe-Bearstein), the risk to the Prinz distressed Bruno greatly.

General Baron Helmut von Pilsner will find himself very much in the royal doghouse for allowing the Prinz to lead any charges -- let alone so many.

But, truth be told, he tried to stop him -- the first two times the Prinz (who had joined the Edelbrau Dragoons) ordered a charge, the Baron was able to counter it (i.e., I twice rolled a 6, failing the charge tests).

However, for the Prinz, the third time was the charm. And that charge not only routed a dragoon unit, but also pushed back a counter-charging unit of Kuirassiers! His follow-up charge routed them, clearing the way for other troops to attack the supply lines.

His continuing pursuit destroyed the remaining heavy cavalry and then converted into an infantry unit. Later, the Prinz, although wounded, took command of the Hofenperle Hussars and led them on yet another key charge into wagons and the flank of yet another infantry battalion, routing it and saving the city.

Both the Edelbrau Dragoons and Hopfenperle Hussars were awarded battle honors for their outstanding service in this engagement.

An artist on a hill overlooking the valley where the battle was fought painted that final charge (as can be seen above).

==== comments ====
This was another very interesting battle. Not knowing what would show up (or where) caused me a considerable uncertainty. Fortunately I got a number of units to arrive at some very opportune times. And, once again, Pete had difficulty controlling his troops.

My biggest problem (at the time) was twice failing to succeed on my charge test . . . but actually that worked out well, since two other units arrived to support me, just as my charge finally went through. I'm sure that Murdock will have a good account (plus lots of better pictures) on his blog within the next day or two.

If things work out properly, he and Pete will play this scenario yet again tomorrow -- with Murdock running the supply column and Pete trying to stop it. I've randomly determined their forces and emailed those to them -- so there may soon be yet another battle report.

Back "On-line" with PCLinuxOS --

Well, that wasn't too bad. I've still got six CD and two "thumbs" worth of files to reload into my computer . . . but I am now up-and-running and MicroSoft-free!

Thanks to my friend Stuart, we were able to get my computer up-and-running on the PCLinux Operating System. I now have eMail again (although I lost all of my old emails) and can use my browser. There is still a lot to do, but those are, after all, the basics.

Also, I am completely unready for Sunday's game . . . I'll need to get busy.