That's right, today (June 19) makes me 60 years old. Boy, how time flies. It barely seems like yesterday that I was a child . . . now I'm only childish (well, at least sometimes).

I've got a present or two to open later . . . clothes, I suspect, since my dear bride doesn't really know what sort of toy soldiers I need (well, okay, want rather than need). So I'll have to order those on my own. I should have done it earlier, but I've been busy. 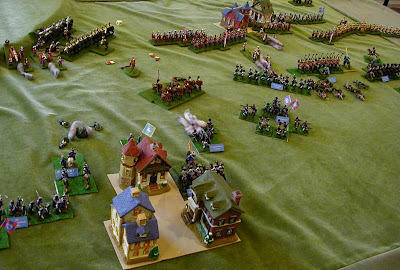 The above photo is from the middle action of this past Sunday (June 15) quasi-refight of the 1741 Battle of Mollwitz as detailed in Charles Grant's "The War Game". 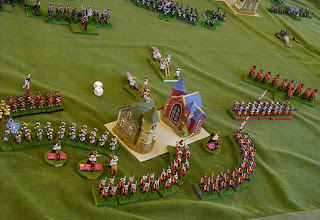 I say "quasi-refight" because we used smaller units (24-man battalions, 12-horse regiments) than Grant; and my "Tricorne Wars" rules instead of his . . . but we used a similar Order of Battle.

It should also be noted that one of the aspects of my "Tricorne Wars" rules is that each side dices to see which troops actually made it to the battlefield.

In the case of our "Battle of Wollmitz", each side suffered the loss of one light gun and a few stands of troops from various units. 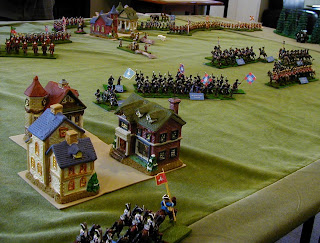 We also used some of our own imagi-Nations -- the Principality of Saxe-Bearstein (in the Prussian position) and the Kingdom of Stagonia (as Austrians). The photo to the left shows a view from the Stagonian center looking out over the buildings of Wollmitz.

Furthermore, direct from Halifax on the eastern edge of Canada, Ross Macfarlane was kind enough to bring a battalion of his own troops, Sir Alexander Keith's Regiment, from Loch Sloy to aid Saxe-Bearstein in its campaign against Stagonia here on Vancouver Island (off the west coast of continental Canada).

Faced with such kindness, I gave Ross and his friend Tom (from Victoria) command of the Saxe-Bearstein/Loch Sloy troops.

Meanwhile Murdock had the bad luck to be handed control of the Stagonian C-in-C, General du Vile. He, perhaps suspecting that my sympathies lay with the opposing side, gave me command of Oppenkopf's brigade, guarding the far left flank of the army . . . with instructions to "Hold" and (later) to "Defend". Pete of Duchy of the North fame was given command of a Hussar brigade on the far right flank (see photo below). 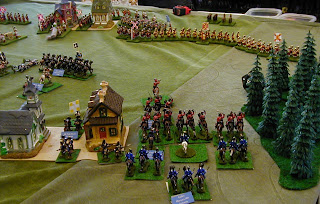 Ross had overall command of the Saxe-Bearstein forces, including an infantry brigade on the far right (facing off against my troops) and a cavalry brigade in the middle of their position with his field artillery. On his left, Tom had two infantry brigades off-table . . . one of which entered in "brigade line" and the other in a number of columns behind them.

Perhaps it was this second brigade's strange manuevers (see the second photo above) that caused du Vile to order a massive cavalry attack (six of his seven regiments) with the hope of catching these troops in column. 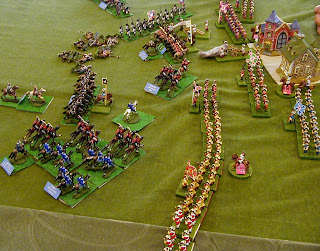 Alas there were inevitable delays in overcoming the various brigades' inertia and by the time the assault reached the Saxe-Bearstein lines, they were trapped in a "killing zone" and were slaughtered almost to the last figure (note photo to the left showing them entering the trap).

General du Vile blamed the loss on an insufficient artillery train . . . but there is some doubt as to whether Koenig Maurice (the Vile) will accept this explanation.

Still, du Vile is a major noble in the Kingdom so the Koenig will find it hard to dismiss him . . . still he is unlikely to be given a major field command again anytime soon.

Anyway, except for Oppenkopft's brigade and one unit of cuirassier, virtually the entire Stagonian force was destroyed. While my forces were not ever committed to action, we tied up the entire Saxe-Bearstein right and denied them any part in their victory. 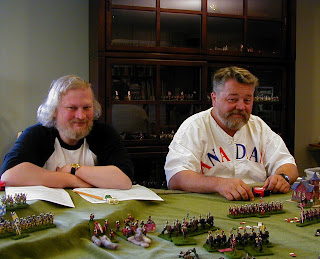 Nevertheless, as can be seen in this final photo, Ross and Tom seem to be pleased with the performance of the Saxe-Bearstein troops . . . as (secretly, of course) was I.

Finally, Murdock took lots of photos (which are generally better than mine) and will undoubtedly soon provide a fine account of the battle from his perspective. Keep an eye on his blog.

Wollmitz -- Changes and an Ally -- 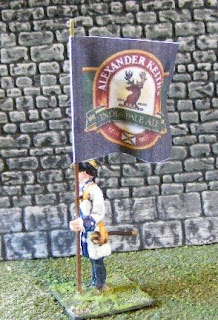 It appears that Ross is bringing a battalion of troops with him. Sir Alexander Keith's Regiment (whose standard is pictured at left) will represent Loch Sloy, an ally of Saxe-Bearstein . . . at least when facing the vileness that is Stagonia.

Fortunately this will free one of the Furst's battalions to remain with the camp (Stagonians are well-known for their thieving ways).

In addition, I looked at the table (pictured in my last post) and decided that I could use more room. I therefor added a 30-inch extension to the table.

So now all we need is some players and the Battle of Wollmitz will be on (this coming Sunday, June 15th). 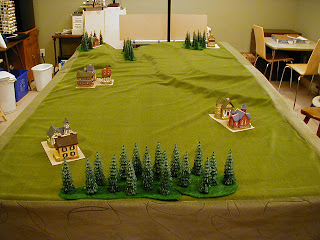 Well, I've snapped a few quick photos of the terrain for our Battle of Wollmitz this coming Sunday.

They are certainly not the greatest . . . one of the problems being that I can't get far enough away from the table on the "long sides" to get a good photo with my (quite old) digital camera. 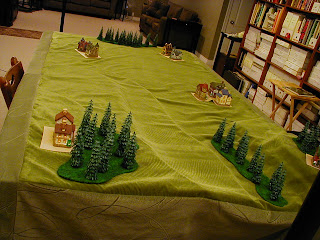 If we use my sketch from the previous post as a guide, the first photo is from the "left side" looking right. 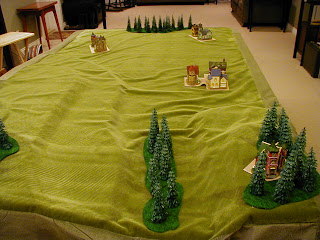 The next pair of photos are from the opposite end, looking back toward the direction of the initial photo.

They are virtually the same, except that they come from slightly different angles to try and show the terrain better. 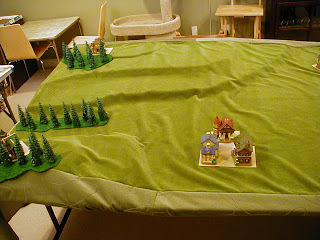 My final two photos are from the Stagonian side (the ones from the Saxe-Bearstein side didn't turn out).

But they should give Murdock (who will be the Stagonian C-in-C) an idea of the terrain. 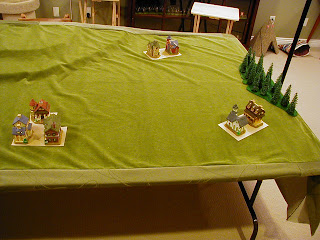 I'm afraid that Ross, the C-in-C of the "good guys" (i.e., Saxe Bearstein) will have to extrapolate from the other photos (sorry, Ross).

Anyway, Gentlemen, I hope that this helps a bit.

Monday afternoon my dear wife started feeling poorly and as she got worse I had to take her to the Hospital Emergency Room.

Well, without going into details, they were able to deal with her problems and we got home about 2 am. And due to the stress of it all, we were both still "wiped out" today (Tuesday) . . . but at least she is on the mend and does feel a lot better (although she's having to take it VERY easy).

About all that I accomplished today (as far as prepping for the game is concerned) was to get some foam cut to create the hills for the Battle of Wollmitz.

I've drawn a very rough approximation of the map (those who have access to THE WAR GAME will see a better rendition). It is, of course, based on the battle of Mollwitz.

Saxe-Bearstein will have the "Prussian" position (entering from the bottom of the map); while those vile Stagonians will be defending the upper portion ("Austrian" position).

Since the Grants did not follow the historical deployment, I'll certainly not limit either side's choices.

By the way, we deploy by taking turns placing Brigadiers down on the table. Once these are down, then troops are deployed anywhere (presumably within the brigadier's command radius -- but if not, they'll have to wait until he gets to them). After troops are deployed, the Generals are positioned.

One of the things that has been delayed is the completion of my "ground cloth". I couldn't find any more of the cloth that I originally purchased (I had purchased all that they had before) . . . but I was able to find something fairly close that we've cut and my goodwife has been piecing it together for me. Hopefully she will be able to finish sewing the added pieces so that it will actually be big enough to cover the table.

Still, there is a great deal of other preparation to do before Sunday . . . and I'm currently so worn down by the stress of Lani's illness that I didn't have the energy today . . . but at least my dear bride is feeling better (which is a great relief).

It will get done, of course. I might not have all of the "bells and whistles" that I wanted to have, but we'll have troops and terrain.