Well Pete came over and we played our second game of Clarence Harrison's ECW rules, "Victory Without Quarter" . . . although, once again, we were playing on the continent in the mid-17th century instead of on England's green fields. 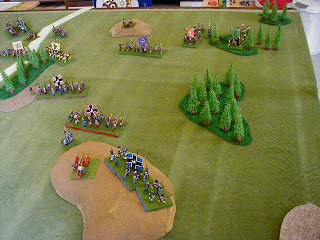 This time we played with those "corrections" which Clarence mentioned in his comment to me after the previous post. Thus only the side moving got to shoot. It worked fine that way . . . uh, I mean that it was horrible (translation -- I lost the game).

We set this up as a Duchy of the North vs Kingdom of Stagonia battle. The forces were equal, but we randomly pulled one mounted unit and one foote battalion from each side for later random reinforcements.

With shooting only from the "acting" side, there was a lot more "see-saw" action, with the advantage teetering back and forth. We also had a number of events. Pete's C-in-C felt that his safety must be insured and abandoned the battle on turn 4 (we played 14 full turns -- three of which went to either the last or next-to-last card in the deck -- before Stagonia conceded).

Speaking of Events, the Brigadier who assumed command of the Duchy's forces later fell off of his horse and was stunned for a turn. He also had a cavalry unit lose movement because they were too tired . . . and even on the last turn, one of his foote battalions decided to go home.

So, with all of these bad things happening to Pete, how did I lose?

Anyway, our biggest rules question had to do with "continuing combats". What happens when a fight doesn't end after the first round? Do we fight the second round immediately? What if troops are still in combat?

Another question occurred when one of my cavalry units destroyed its opponent (another cav unit). They were supposed to "pursue" . . . well, figuring that not every rider was killed in melee (although the unit was picked up), that there must have been some riders fleeing, we decided that the pursuit was proper . . . which slammed us into the new unit waiting just 3" back (directly behind the new unit).

So, just when would this combat be fought?

Still, all-in-all we had a fun contest (even though Pete beat me -- despite having lousy luck with the Events). We will undoubtedly play this again.

Also, Murdock has now posted his account of the battle fought a few days ago. To read it (and see some excellent game photos), go to:

Melee is the bugger of every rule system. Again, I realize there are things that aren't explained well and not every situation is covered. Here is how I play:

1. Only one round of melee is fought on a unit's card (or general's order). In the example on page 8, the combat lasts for two turns ("Shortly afterwards, Unit C's card comes up..."). Both sides fight on the turn either card is drawn. You could experiment with resolving the combat on contact (i.e. fight the melee until one side is no longer able to do so). This will make melee deadly and decisive, but in the games I tried this in, it was too much so. Battle lines evaporated once units came into contact. It did not have the feel of the period to me.

It may seem strange that units would remain "locked" in melee for several turns, but in a narrative sense, I don't view them as hacking and shoving for the entire time. Example: Cavalry presses the pikes only to be repulsed, maybe retiring thirty paces before pressing again or milling around just out of reach exchanging sporadic fire to little effect (or the effect is counted as part of the melee results)while officers try to bring order to the mess.

2. While it is perfectly fine for a victorious unit to "pursue" a destroyed enemy (as you mention, the enemy was hardly annihilated on the spot), I don't fight another melee if contact is made. While it may make sense, it pushes the envelope of what may happen in a turn, even with the sliding time scale. Also, this does not count as a charge for either side. The unit pursuing does not need to make a morale test to close into contact, nor does the defending unit get to fire, change formation, or even withdraw. Cavalry does not gain the charging bonus either as I see the unit as wildly unorganized at this point. However, this does mean that a victorious infantry unit may blunder into a steady enemy infantry unit or even an enemy cavalry unit which would not normally be the case. Mind your deployments!

Oh! I also reduce the pursuit dice by one die if the enemy unit was destroyed out of hand. That is an amendment made by another group that has been using the rules and I adopted it in my own games.

Hope that helps and I'm glad to hear you guys are enjoying the rules! Please feel free to ask questions any time and remember again that this is only how I resolve these situations. If you feel things should be interpreted differently to match your impression of the period, certainly use your own judgment (and send me your house rules)!

Hand to hand combat is always hard to resolve. For horse we use a variable round system where the rolling of an average die per side will conclude a melee if both sides roll the same number.
For foot was it actually hand to hand or point blank? A question we've been pondering for years. In the Napoleonic period it was only sieges or buildings that saw the bayonet with most open field encounters resulting in one side running before engagement - fear of the French column in most cases for the European theatre. In the WSS I'm struggling to find accounts of the bayonet being used in the open field so I'm guessing it was a similar experience. So our melees last just one round for foot - if you don't break one side you retire from the fray.

Jeff,
I really do enjoy your site despite so many units of our armies sharing such illustrious histories. This must prove great minds do operate on parallel tracts.
Best regards,
Wilhelm von Beerstein

Jeff - can you share a copy of the rules?? Have emailed Clarence a couple of times, but no response... pls contact me via the OSW group...

Hope you're enjoying Beneath the Lily Banners.... I need to try a game with them soonest!