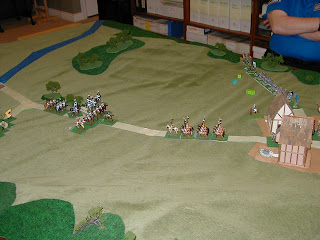 Well we opened my new game room last night with the Battle of Ubergang between Pete's Duchy of the North's forces and those of Murdock's secondary imagi-Nation of Burtzenia.

This battle was based directly on one of Grant's "Table Top Teasers" . . . specifically #3 -- "The Advance Guard Action."

As with all "Wars of Arcadian Glory" games using my "Tricorne Wars" rules, commanders and units were randomly selected. As usual, this resulted in a mix of morale grades and command personalities. 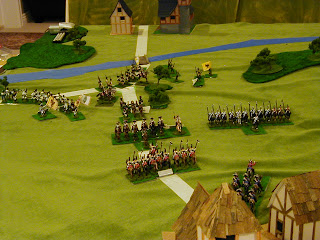 Both sides then diced to see what "showed up" to the battle . . . and Murdock got the worst of this. Only two of his four elite squadrons of Dragoons showed up . . . a loss that hardly compared with the three companies of raw skirmishers that Pete lost.

Both players surprised me a bit with their deployments after they marched on . . . but that's hardly surprising . . . they had different plans than I would have made.

The first photo (top of page) shows the start of their continuing struggle for the road into town. 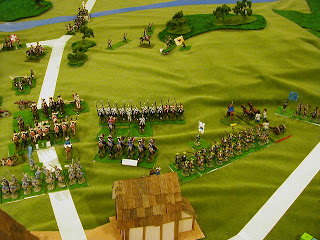 The second photo shows things a turn or two later from behind the town looking toward the bridge in the distance.

If you look closely, you will note some Burtzenia infantry and a gun peeling off to take and hold the bridge in the distance . . . as some Norden cavalry comes out of the town to counter Murdock's heavy horse.

The third photo shows things a few minutes later . . . and, if you are wondering why the infantry is there, there is a story behind that. 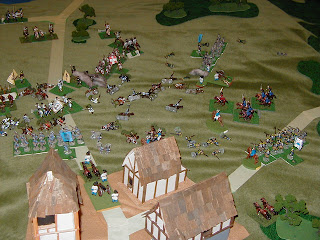 Pete's C-in-C was Maj. Gen. Olle Fastovik . . . who is noted as a very "careful" personality. The infantry was under Brig. Sir Elof Amundsen Krook, well known for his aggressiveness on the battlefield.

Under my "Tricorne Wars" rules, when a "Careful" commander issues an order, commanders under him "add one" to their die rolls for interpretation.

Well, to make a long story short, Krook re-interpreted his Advance orders into an all-out Assault! (Later in the game, when he received new Advance orders, he again interpreted them upwards to Attack orders . . . well we can hardly fault his aggressiveness, now can we?)

The final photo is well into the game (which lasted 20 turns in about 6 hours of play) shows many of the dead bodies that indicate the heavy fighting that took place before the competitors settled for a draw.

It was a good battle and the rules seemed to flow pretty well. I noted a few points that I might decide to tweak, but all-in-all I was pleased . . . and my game room has been initiated.

Glad things orked out for you and that everyone enjoyed themselves for the game.

Nothing like a table full of miniatures! Looks like it was lots of fun. Thanks for the photos too. Glad your rules worked out pretty well. Do you plan to eventually publish them?

They currently are no where near anything like that. I think that they are a fun set of rules . . . but they still need a lot of work to get them where I want them.

Even then I doubt that I'll do anything "professional" with them . . . but that's a long way off. Right now we're just having fun with toy soldiers.

Fantastic.... so both sides held the preliminary objectives but weren't able to take the secondary?? Interested to hear how close it was - did either side look like they might win at any time? :o)

As it turned out, not really . . . but if a few dice rolls had gone differently, Burtzenia would have had a shot at taking the town.

However those die rolls didn't go that way and, while Pete's troops paid a very heavy price, the town was not actually attacked.

As for the bridge, due to Burtzenia heading straight for the towm, the Duchy of the North never even got close to it.

Pete and I are hoping to give the scenario another try sometime within the next week or so. He'll have his choice of coming from the north or south and I'll take the other. We'll see how that one develops.

...excellent news (about the next game) I look forward to reading the account. In the meanwhile, as suggested by another poster previously, I've added a link to yours and Murdocks posts from the relevant teaser on the Teaser page...

Very nice photos of what must have been a delightful game. All those commanders doing whatever they thought they ought! How grandly frustrating!!

An excellent account, and a suitably sanguinary action to blood the new room. Thanks for sharing with us.

Nice battle report and pictures; glad to see you wargame room is now in use